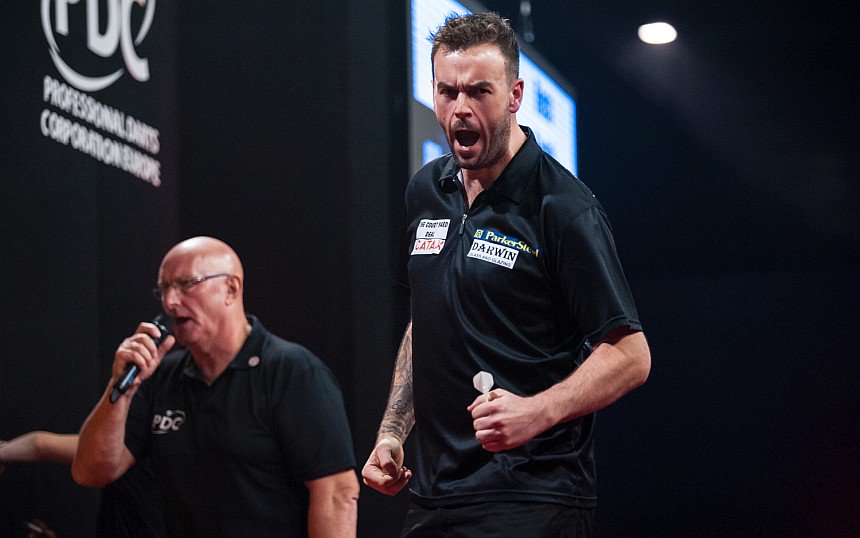 Back to back defending champion Gerwyn Price will not achieve the three-peat in Riesa.

The Iceman let a 4-0 lead slip to Ross Smith in Saturday’s evening session to fall to just his third loss in 26 matches.

The defeat is also his first loss in Riesa in 3 years, after winning the title on the last two outings.

Danny Noppert and Franz Roetsch both produced fine displays to defeat Adrian Lewis and Rob Cross respectively.
The Dutchman defeated Jackpot for the second time in 2 weeks with another classy display. However, it is Franz Roetsch that will have grabbed the attention of more.

The German, on his Euro Tour debut, already accounted for The History Maker, Brendan Dolan yesterday.
But he went one better as he added 10 points to his average, and defeat the reigning European Champion in Rob Cross.

Scott Baker edged past Daryl Gurney in today’s afternoon session. Neither player were at their best, but the Mod won’t mind as he sets up a meeting with Danny Noppert.

The last 3 games all saw seeds depart, as Price was followed by Jose de Sousa, and in turn, Ian White.

Young German star Max Hopp was superb in his classy 6-3 victory over the special one.
Hopp got off to a flying start, hitting 4 180’s in the opening 2 legs on his way to back to back 11 darters. The average didn’t quite stay up in the stars, but it was a great performance nonetheless and is rewarded with a showdown with Ross Smith.

Jesus Noguera is the final seed conqueror of the day. The Spaniard averaged 93 exactly to see off 3rd seed Ian White. A man who many would have fancied to be in contention for the title in Riesa.
In doing so, not only has he given himself a late chance to qualify for the European Championships, but has moved into a Provisional World Championship spot.

Rounding up the rest