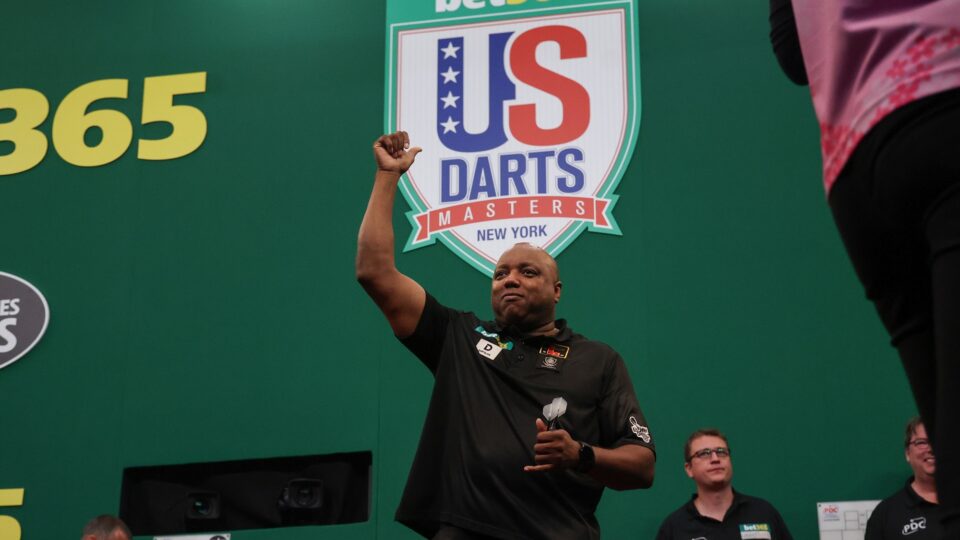 As the PDC World Series of Darts event began in New York on Friday, American ace Leonard Gates caused a stir with a memorable win over Fallon Sherrock in the bet365 US Darts Masters.

The much-anticipated tournament at Madison Square Garden’s Hulu Theater got off to a strong start, with Gates advancing to the final stages on Saturday.

He came back from a leg down to lead 4-1 against Sherrock, who fought back in leg six but couldn’t stop Gates from winning with finishes of 70 and 82.

“The energy was something I’ve never experienced here in North America before – it was great!” admitted Gates.

“It wasn’t her A-game but she’s done a lot of great things for darts and women’s darts, and I applaud her. She’s definitely the crowd favourite but I had to play my game.”

Gates will now face World Champion and world number one Peter Wright, who beat top-ranked American Danny Baggish 6-4 to advance to the next round.

Baggish of Florida led 2-1 early on, but Wright’s 121 finish on a 12-darter in leg four ignited a run of three consecutive legs that placed him in command.

“The crowd tonight was all behind USA and darts is the winner tonight – we’re lucky to be playing here in New York,” said Wright, who wore a specially-designed shirt themed on a New York taxi.

“I missed a few doubles here and there but I don’t think I had the right glasses on and I’ll have to try my normal ones tomorrow.

“I was a little bit rusty but I’ll brush up on that. I want to be the first one to win this tournament but there’s a long way to go yet.”

Gary Anderson, the former US Darts Masters champion, started his quest for a second title with a 6-3 victory over Matt Campbell, despite the Scot having to play with borrowed darts.

With legs of 13, 12 and 14 darts, Van Dongen came back from 3-0 down to trail 4-3, but paid the price for missing a chance to tie in leg eight before Van Gerwen sealed the victory.

Van Gerwen will now face James Wade in the quarterfinals, when the left-hander defeated Canadian number one Jeff Smith 6-2.

Gerwyn Price avoided a scare against David Cameron of Canada to advance to the quarterfinals with a 6-4 victory.

Cameron came back from a 2-0 disadvantage with a 124 checkout and also erased a two-leg deficit to tie the match after eight legs – but he paid the price for missing a dart at tops to lead in the ninth leg, which Price pounced on to seal the victory.

The quarter-finals, semi-finals, and finals of the World Series of Darts will be held in the Hulu Theater on Saturday evening.

In addition, the bet365 North American Championship will be held during Saturday’s afternoon session, with eight US and Canadian professionals competing for the title and a spot in the Cazoo World Darts Championship in 2022/23.