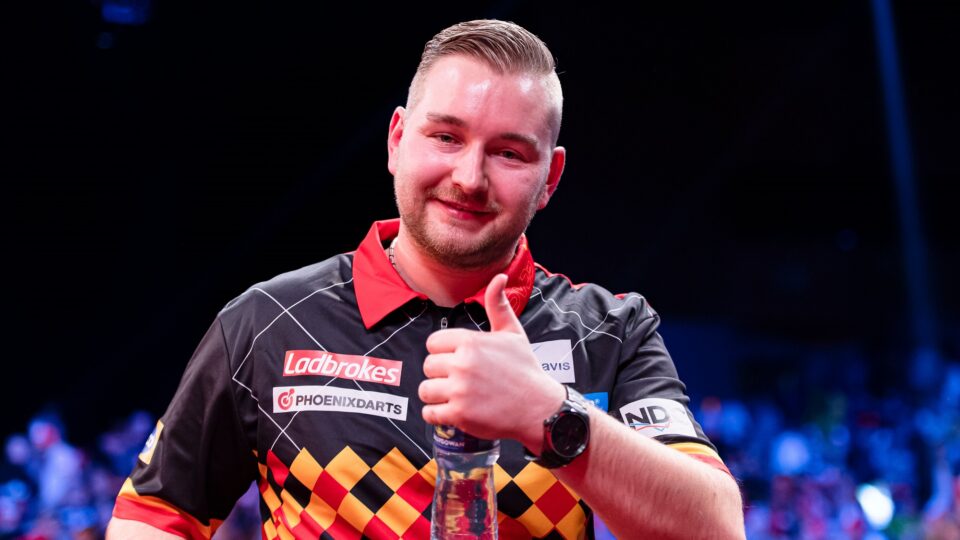 Dimitri Van den Bergh put in a sensational performance on day one of the Ladbrokes Masters.

Dimitri wasn’t the only favourite to come through in the opening round with Rob Cross and Ryan Searle defeating Brendan Dolan and Mervyn King respectively.

Elsewhere, day one of the Ladbrokes Masters saw:

Dimi didn’t make the crowd wait long for the big checkout, firing in the 167 with a Ian White sat on a checkout, to break in leg one. The breaks continued in the next two legs.

The first hold came the way of the Belgian, who fired in seven perfect darts on his way to a 14 dart leg. This came before another ton plus checkout, this time a 108 from The DreamMaker to move just two away.

Dimitri clinched the win with ease by winning the next two legs and booking his place in the last 16.

Rob Cross eases past Brendan Dolan with a 6-2 victory to set up a last 16 tie against The Special One.

The slow start from Brendan was punished by Rob Cross who took the first three legs.

Brendan was then able to hold with his next two throws but it wasn’t enough, and Cross won the game with a 88 average.

Rob Cross will return to the Milton Keynes first game tomorrow afternoon when he will take on Jose de Sousa.

Searle sets up tie with World Number one

Ryan Searle eased past Mervyn King with two ton plus checkouts to set up a mouthwatering Saturday night encounter with Gerwyn Price.

Both players started the game slowly but it was Heavy Metal who took an early 3-0 lead. Mervyn King got his only leg on the board in leg four, however Searle regained his three leg lead by dominating the fifth leg.

It was the last two legs when we saw the ton plus checkouts from Heavy Metal. The penultimate leg was a 118 checkout, however he saved the best till last firing in a 156 checkout to win it and knock out last years runner up.

What else happened on day one of the Ladbrokes Masters?

Luke Humphries defeats the out of form Devon Petersen 6-1 to set up a clash with Michael van Gerwen on Saturday evening.

Joe Cullen Reeled off the last four legs to defeat Daryl Gurney 6-2 to set up a tie with Gary Anderson.  Simon Whitlock completed the second round line up with a 6-2 over Dirk van Duijvenbode.