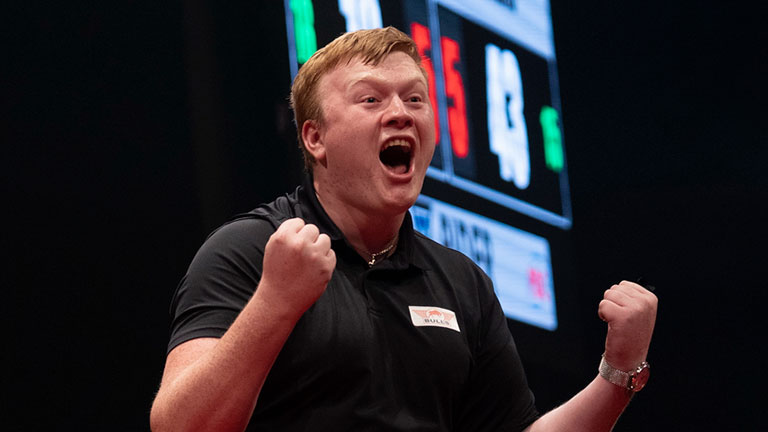 Ricky Evans and Josh Rock clashed in arguably the most eagerly anticipated match of the session and it proved to be a high-quality encounter with both players averaging in the high 90s, ‘Rapid Ricky’ eeking out a 6-4 victory. Rock’s profligacy on the outer ring turned out to be a deciding factor, the man from Northern Ireland hitting just 4 of 20 attempts at double.

There was better news for another man from Northern Ireland as Mickey Mansell hit 4 180s and averaged 97 to beat Jeffrey De Zwaan 6-4. He now goes on to face fellow countryman Brendan Dolan on Saturday afternoon.

Rowby-John Rodriguez impressed as he dispatched Scott Waites 6-2, the Austrian averaging 99 and finishing with a 60% success rate on the doubles in the process. He faces a man in form, Michael Smith next.

The final match of the session gave the home fans something to cheer as home nation qualifier Vitezslav Sedlak provided a minor shock, beating Jon Worsley 6-4. Both players started slowly in a nip and tuck encounter before Sedlak broke the Worsley throw in 15 darts to claim victory. Sedlak now has the small matter of Michael van Gerwen to contend with tomorrow.

Karel Sedlacek set up a tasty-looking Saturday evening match-up with Dirk van Duijvenbode, much to the delight of his home fans, as he defeated Gabriel Clemens 6-3. In a steady rather than spectacular performance, ‘Evil Charlie’ averaged 90 to dispose of his German counterpart, the highlight being a 101 checkout to go within a leg of victory at 5-2.

Sedlacek was the second Czech victor of the evening after Adam Gawlas had earlier beaten Dennie Olde Kalter 6-4, hitting 4 maximums along the way.

Nathan Aspinall will play Dimitri van den Bergh in a mouth-watering clash on Saturday after he dispatched John Henderson with consummate ease, with the loss of a single leg. Dave Chisnall went one better than ‘The Asp’ as he whitewashed host nation qualifier, Filip Sebesta.

Jackpot sets up a meeting with Price

Former two-time world champion Adrian Lewis advanced to a clash with another former world champion in the form of Gerwyn Price, as he beat Ted Evetts 6-3. ‘Jackpot’ will look to replicate his accuracy on the doubles against the ‘Ice Man’ after finishing with a 60% success rate against ‘Super Ted’.

The final match of the evening was an all-Dutch affair and it was the experience of Vincent van der Voort that came to the fore as he beat Geert Nentjes 6-2. He will now face Martin Schindler.