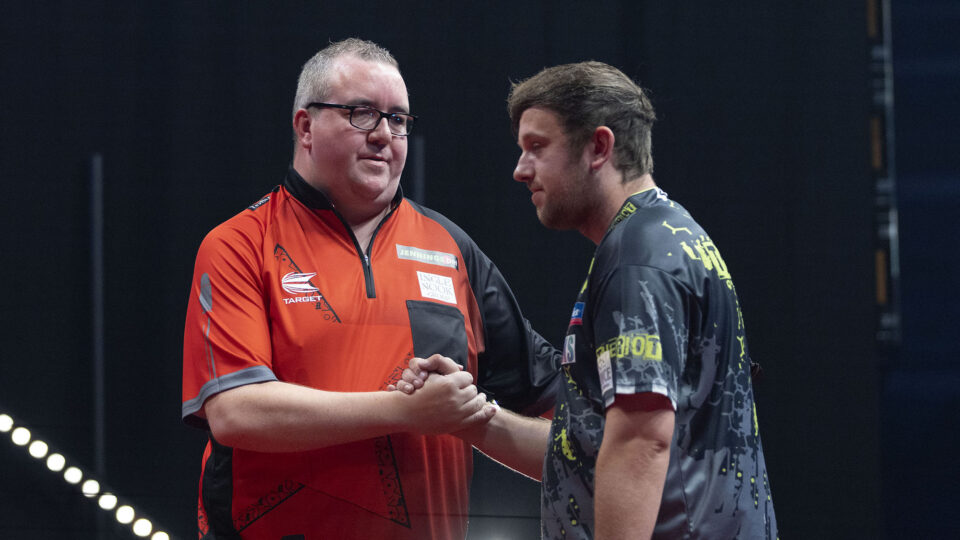 Whitlock was one of several high-profile names in first-round action at the BOK Sportcsarnok, and the World Cup winner from Australia delivered as the European Tour returned after a two-month hiatus.

The 53-year-old began his campaign with a 6-2 triumph over host-nation qualifier Vegso, racking up six maximums and converting 122 and 147 finishes in consecutive legs.

Whitlock squandered a number of match darts in the closing stages, but regained his composure to advance to a showdown with top seed Van Gerwen, who is aiming for a sixth consecutive title.

Daryl Gurney, on the other hand, delivered the performance of the day in Budapest, averaging 105.3 to defeat fellow countryman Nathan Rafferty 6-1.

Gurney was brutal in Budapest, winning all six legs in five visits to the board to set up a showdown with Michael Smith for a place in Sunday’s final stages.

Stephen Bunting was also on fire on Friday, averaging 103.66 to beat Callan Rydz and book a match with former UK Open winner Nathan Aspinall in the second round.

Bunting’s St Helens teammate Dave Chisnall cranked on the style in a 6-1 thrashing of Daniel Larsson, hitting a spectacular 137 checkout to set up a mouth-watering clash with Jonny Clayton.

All four Hungarian representatives were eliminated in round one, as William O’Connor won a gritty match against Pal Szekely to set up a meeting with 13th seed Dimitri Van den Bergh.

Earlier in the day, Jeffrey De Zwaan and Boris Krcmar both defeated regional qualifiers Andras Borbely and Levente Sarai to set up clashes with Rob Cross and Luke Humphries, respectively.

Josh Rock continues to dazzle on the big stage, hitting four 180s and a spectacular 121 finish to defeat Darius Labanauskas and set up a showdown with Australia’s number one Damon Heta.

Rusty-Jake Rodriguez will face UK Open champion Danny Noppert for a place in the last 16. He fired four maximums his route to a 6-2 victory against Canadian veteran Jeff Smith.

The Latvian was scheduled to face defending champion Gerwyn Price in the second round, but he now has a bye following the world number one late withdrawal.

The event will end on Sunday with the third round in the afternoon session, followed by the quarter-finals, semi-finals, and final in the evening session, with the seeded stars taking the field on Saturday.