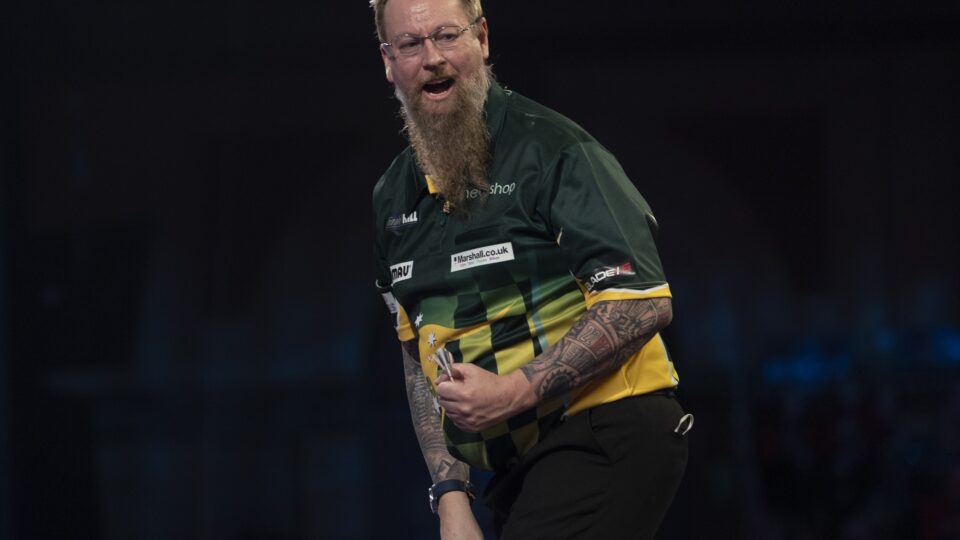 Top seed Van Gerwen squandered 25 darts at double as his winless run against Whitlock continued, with Australia’s World Cup winner registering a nerveless 13-dart hold in the decider to progress.

Meanwhile, Wright was left to rue two missed match darts in an edgy conclusion against Williams, who fought back magnificently from 5-3 down to advance.

Wright, making his first appearance since undergoing gallstones surgery last month, conjured up 160 and 145 finishes to seize the initiative, but skin-saving 125 and 100 checkouts catapulted Williams to an unlikely victory.

Jose De Sousa landed a sublime 11-dart break to clinch a last-leg win over Raymond van Barneveld, after the Dutch legend wired one match dart at double 18 in a dramatic finale.

The opening tens leg went with throw, yet De Sousa – who missed double 12 for a nine-darter in leg four – followed up his sixth 180 by pinning tops to prevail with a 99 average.

De Sousa will now lock horns with Jeffrey De Zwaan on Sunday, after the Dutchman fired in five 180s to topple Rob Cross 6-4 and preserve his European Championship qualification hopes.

Boris Krcmar claimed a crucial win in his bid to qualify for October’s main event, winning five straight legs to stun second seed Humphries and set up a showdown with Dave Chisnall in round three.

Chisnall produced two sensational finishes to deny Jonny Clayton earlier in the afternoon, following up a 117 checkout in leg nine with a brilliant 135 finish on the bull to seal the deal in style.

Joe Cullen returned to winning ways on the European Tour courtesy of a battling 6-4 win over Martin Lukeman, and the Masters champion now faces Welsh star Williams in the third round.

Elsewhere, Nathan Aspinall defied a late rally from Stephen Bunting to book his place in Sunday’s last 16, punishing a profligate display from the St Helens star to close out a comfortable 6-3 success.

Josh Rock fired in a superb 104 average to secure his first victory over Damon Heta, reeling off four consecutive legs from 4-2 down to dump out the Australian number one.

Rock will now take on tenth seed Dirk van Duijvenbode tomorrow, after the Dutchman also averaged 104 to prevail in a high-quality contest against Chris Dobey, registering six maximums en route to a 6-3 victory.

Dave Chisnall produced two sensational finishes in the latter stages to deny Jonny Clayton in a last-leg decider, following up a 117 checkout in leg nine with a brilliant 135 finish on the bull to seal the deal.

Michael Smith stormed through to Sunday’s final stages with a whitewash win over Daryl Gurney, taking out a 116 combination and a double-double 96, to move through to a third-round tie against William O’Connor.

The Irishman secured a spot in the last 16 on the European Tour for the first time since 2019, courtesy of a 6-3 success against an out-of-sorts Dimitri Van den Bergh.

Rusty-Jake Rodriguez will play Madars Razma on Sunday afternoon, after the young Austrian produced his best performance on the European Tour to dispatch UK Open champion Danny Noppert 6-1 with a 99 average.

Ryan Searle was another seeded casualty on Saturday afternoon, succumbing 6-3 to Czech star Karel Sedlacek, who wrapped up victory with a brilliant 126 finish to move through to Finals Day.

Elsewhere, Krzysztof Ratajski’s woes on the European Tour continue, after Poland’s number one was edged out by Ryan Meikle in a scrappy ten-leg affair.