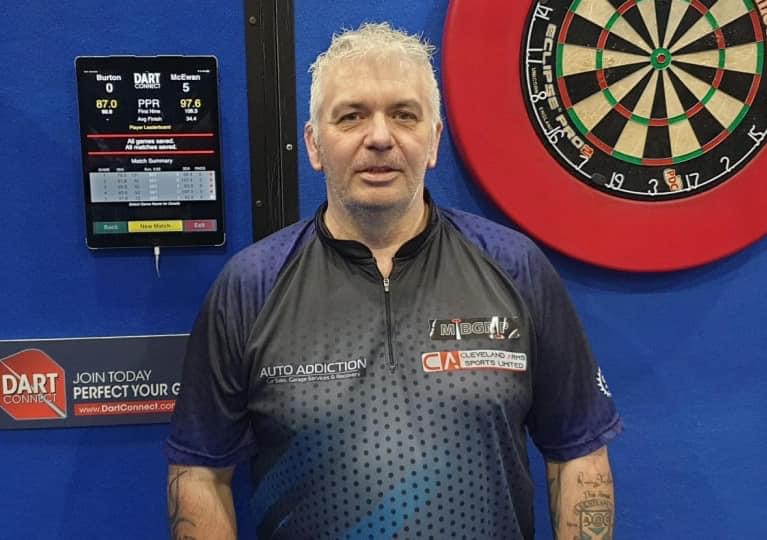 McEwan shines to win Champions Week at the Live League.

After four weeks of competitive darting action, the top 12 players from Phase 1 all battled it out for a spot at finals night and £6000 first prize.

It was the best possible start to the week’s action for Week 1 winner Josh Payne as he topped the table overnight, however the Week 4 winner Jim McEwan was sat right behind him in second.

In one of the games in Day 1 of the group, it was simply sensational as it saw Josh Payne average 120 over the first 3 legs, within those three legs he took out a 160, 144 and a 136, in defeating Week 4 runner up Lisa Ashton.

Going into Day 2 Week 3 winner Robert Owen won all his 5 games and booked a spot in Group B. It came write down to the wire and it was delight for McEwan as with Payne losing to Welshmen Owen in the final game of the group it gave the group title to Jim McEwan who booked the first spot at finals night.

After having two dominant days in the groups action it saw Colin Osbourne join Owen and Payne in Group B. With Scott Baker sat on 8 points it saw him and 4 time World Champion Lisa Ashton battle it out in Group C.

At the end of the session on Day 1 of the group, it saw Scott Baker have a wonderful Day with only losing 1 game, but he had Daryl Pilgrim, Lisa Ashton and Andy Jenkins in hot pursuit going into the Day 2 of the group.

It wasn’t the best possible start for Welshmen Mike Warburton as he only won 1 game, as it saw him with it all to do going into Day 2 of the group.

However, with Frenchman Thibault Tricole sat in fifth spot, still in the picture of qualification. Both Baker and Pilgrim carried on their dominant displays as they both took qualification into booking themselves a spot at finals night.

It wasn’t to be for Ashton as she missed out on a spot at finals night by leg difference, with this it saw Tricole take fourth spot, and Englishmen Jenkins take fifth spot. With this it was not to be for Welshmen Warburton as he takes last place in the group.

After finishing in second place in Group A Robert Owen hits a personal best average of 111.33 in defeating Week 1 runner up Chas Barstow.
Commentator Chris Murphy said “that it was one of the best live league sessions ever”

As it saw a record breaking 41 180s hit in a single session. Winner of week 2 Mike Gillet took pole position in the group going into Day 2.
Josh Payne sat on 4 points going into Day 2 and both Chas Barstow and Colin Osbourne sat on 2 points overnight.

Day 2 saw Owen take out 65 in defeating Osbourne and it was heartbreak for him as it knocked him out of contention of qualifying for finals night as he fell at the final hurdle. With this happening Payne got through the group and qualified for the final night.

It came right down to the wire in Group 1 as it saw all three of the competitors, McEwan, Gillet and Pilgrim all win 4-1. Which meant because the Welshmen Gillet had the lowest average of the group it saw him get knocked out of the action, Jim McEwan and Daryl Pilgrim both secured a spot in the semifinals.

In group two Welshman Robert Owen got off to a flyer as he walked past Scott Baker in beating him 4-0. This meant in the last game of the group if Baker had won 4-0 he would have qualified for the semis, it wasn’t to be for Baker as it saw Josh Payne pick up 2 legs which booked him a spot in the semis.

Jim McEwan looked untouchable in parts of the first Semi Final as he beats Payne 4-1 to be the first finalist. On the other side of the draw it saw Pilgrim ease his way past Owen 4-0 to join McEwan in the final.

The third and fourth playoff saw Robert Owen take third place and won that extra £500 and with Payne finishing the Phase 1 in fourth.

The final came right down to the wire as it saw Pilgrim miss one match dart. Which then saw the Scot Jim McEwan pick up the first Live League Champions Week of 2022 in winning 4-3.