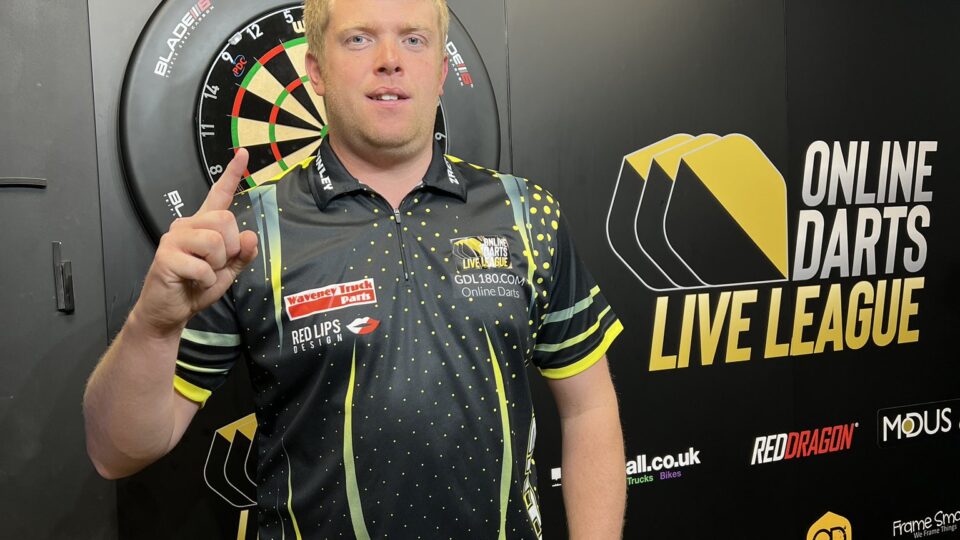 Stephen Burton wins Week 1 of Phase 3 of the Live League.

After, Welshmen Robert Owen reigned supreme in phase two, picking up the phase title and £6000. The live league makes its return for phase three and it saw 12 players all battle it out for the first three spots at champions week.

Group A, saw phase 1 champion Jim McEwan take on Englishman Lee Evans to kick off the weeks action. Evans made an incredible start to the week by taking pole position going into day 2, however he had McEwan, top the challenge tour order of merit Scott Williams and Mathew Edgar in hot pursuit all on 6 points. On the other side of the table, both Keelan Kay and Gary Robson were still in contention going into day 2.

It wasn’t to be for Chucky, Jim McEwan as he only won 1 out of his 5 games which saw him out of contention for top spot of the group. This saw him join Kay and Robson in group c. After beating Edgar 4-1, Williams was in complete control of the group until Evans pinned double twenty to beat McEwan 4-1 and booked himself a spot at finals night. Both Williams and Edgar battle it out in group b.

Group C, saw debutant Pete Burgoyne not get off to the best possible start as suffered a 4-0 defeat to McEwan, where as for Reece Colley, saw him win his first game at the live league 4-2 over Kay. At the midway point of the group actions, McEwan sat on top but just behind sat Johnny Haines. It was the same story for both Kay and Gary Robson who both only found one win and had it all to do going into day 2. For debutants Colley and Burgoyne as they sat with Haines all on six points. What a day 2 it was for both Kay and Robson as they both won three games, which meant Colley and Burgoyne had to settle with 8 points. At the top of the table both Haines and McEwan both qualified for finals night with Haines winning the group on leg difference.

Group B, saw a sensational start to the live league for debutant Graham Hall as he pinned double top to put aside Edgar 4-0 with a 103 average. However hall could only manage to find two wins for the hole of the evening and sat in third place at the halfway point. At the top of the table sat Scott Williams who didn’t lose a match, but at the opposite end of the table, Dave Pallett couldn’t find a single point and had it all to do going into night 2. Stephen Burton all managed to lose only 1 game which saw two points behind group leader Williams. Whereas Edgar sat in fourth but was still in contention to qualify for finals night.

What a difference a day makes, after losing all of his games on night 1, Lee Evans did exactly what he had to do to qualify with all of his games and joined Williams and Evans at finals night. It wasn’t to be for Edgar and Hall as the just missed out on qualifying.

What a start it was ti finals night for Stephen Burton as he won 4-1 against Scotsman Jim McEwan with a 103 average. Haines went 7 darts into the perfect leg against Pallet in the opening game of group 2. After losing his opening game McEwan had it all to do against group a winner Lee Evans and that is exactly what he done winning 4-3. It was heartbreak for Pallett after losing to Haines in his opener, he did the same against Scott Williams. Meant that both Williams and Haines qualified for the semi-finals. On the other side of the draw Burton topped the group after back to back wins and brought McEwan with him.

The first semi-final, saw Burton make easy work if Haines in beating him 4-0. On the other side of the draw, it was a finishing masterclass from McEwan as he came back from 2-0 down to win 4-2 and joined Burton in the final.