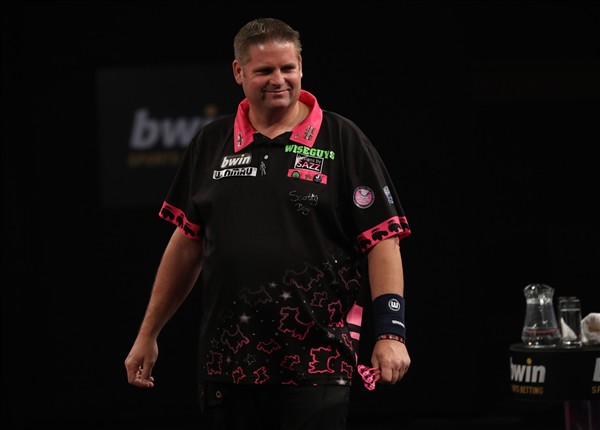 Scott Mitchell was the star of the day in the MODUS Sports Icons of Darts Live League. Mitchell was unbeaten over the day winning all five of his games as the former champion of the world swept the field aside.

Mitchell opened up his campaign against debutante John Brown; the game wasn’t much of a test as Mitchell ran out a 5-1 winner. Scotty dog would have one more match before the lunch break, against another debutante Stephen Burton. This was a more stringent test for Mitchell than his first game, but Burton didn’t have enough as Mitchell would win the match 5-3.

Mitchell’s third game would be the south coast derby, as Rocky Andy Jenkins was next in Mitchell’s path. Missed darts from Jenkins in the middle of the match, gave Mitchell his chance to pounce. Mitchell winning 5-3 making it three from three, with eyes now firmly in the title.

Mitchell would now have to wait, as he would play in the final two games of the day against Paul Nicholson and Mark Webster. The match against Nicholson was for the title, as Nicholson was sat in second in the table and the only one who could catch Mitchell.

With everything on the line, Mitchell started like a house on fire. Running away with the match, winning 5-1 to seal the title in style. Going into his final game knowing he was champion, and that he had an outstanding record against Webster must have been a great feeling.

Mitchell was in total control of the final game of the day, winning 5-2 and making it a clean sweep for the day. Nicholson finished in runners up after Websters defeat to Mitchell. Webster finishing the day in third place.

The MODUS Icons of Darts Live Returns in the morning from 10.30 am.