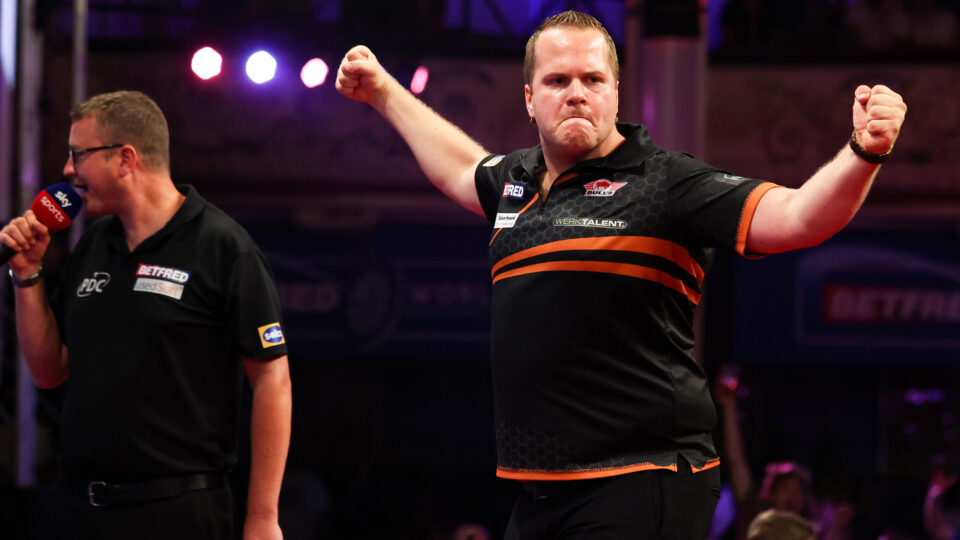 Quarter Final line up confirmed, with the last eight including Gerwyn Price and Jose de Sousa after wins on Wednesday night in Blackpool.

Dirk van Duijvenbode defeats Michael Smith 11-7 to set up an all Dutch tie in the last eight.

Dirk van Duijvenbode raced into a 4-1 lead, averaging 111 over that period. We saw the biggest checkout of the week, in leg four with the big fish.

Michael Smith knew he had to find his scoring boots, and he duly obliged and got a break back to close the gap to two making the score 6-4, however it could of been better hitting two 180’s in the tenth leg but missed two darts for the leg and Dirk cleaned up with an 85 checkout.

Dirk won the next two legs, with a crucial leg twelve, after both missing an handful of darts but the Dutchman takes it.

After two holds of throw, we came close to a special moment in leg fifth teen with Smith hitting eight perfect darts, just missing double 12 to despair of the crowd, Smith did close the gap two to legs but after struggling to hold throw, Dirk won one more leg to make his way into the last eight with an 11-7 victory.

The first of those checkouts came in leg one, with Price finding a magnificent 161 checkout. That was just an hold of throw, in which we saw four on the bounce, before Chizzy got the first break before the interval.

No breaks in the second session, with limited chances across the throw, meant that the lead was extended by one going into the second break.

The second of the big checkouts from Price came in leg twelve when he fired in a 124 on the bullseye, to level the game up and get the break back. After a strong hold, and the lead for the first time since leg 3,  it was another ton plus out, with the biggest of the game, a 164 checkout.

Chizzy had chances to break back in leg sixteen, however,  after missing three straight darts at a double, Price got that leg and the next to move one away.

It was Chizzy’s time for a ton plus out, this time a 111, however, it meant very little as Price wrapped the game up in the next leg.

The Special One raced out the blocks averaging just shy of 107 at the first break, and with two breaks lead 4-1.

The next five legs all went with throw, with Cross ending the session in style with a 10 dart leg.

Voltage had the opportunity for another 10 dart leg in the first leg after the break, however, after missing all three at the double, Jose cleaned up 74 to take the lead to three again.

Jose extended that lead further with a 120 checkout, after Cross missed double 18 for the leg. Rob Cross did get a ton plus checkout taking out 106, before breaking with a 14 dart leg.

Jose did move one away in the next leg before, Cross found a break and then held with another 106 checkouts. Jose secured the win in the next leg with a 15 darter, and we saw tears from The Special One.

The start in this game seemed crucial with Noppert breaking twice in the first session averaging over 105 and leading 4-1.

2022 UK Open put another nail in the coffin early on taking out 114, after Gurney missed double 16 for a 152. Leg 10 we Noppert showed his dominance by hitting a blind 180, after Gurney tried a blind dart and only hitting 100 the throw before. After the 180 Noppert followed it up with an 86 checkout on Bullseye to win 7-3 at the second break.

Danny Noppert continued to be relentless after the break, taking out his third and fourth ton-plus checkout, a 132 before a 103.

Superchin got another leg on the board, however, it was only a consolation, after Danny Noppert sealed the win with a 15 dart leg.

For all interviews from World Matchplay Day Five head over to Online Darts YouTube channel.