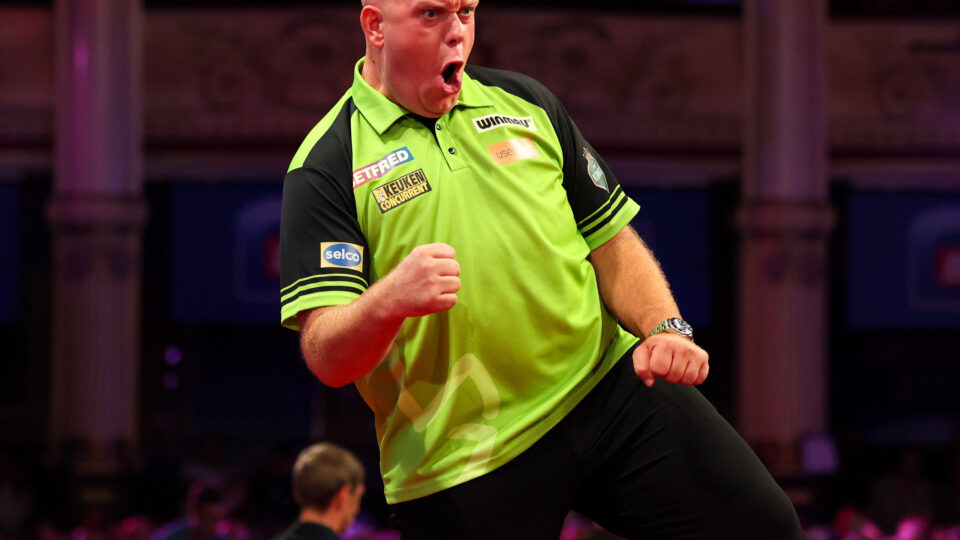 Michael van Gerwen and Nathan Aspinall faced each other once more in the last eight at Blackpool.

Dimitri van den Bergh got his revenge on Peter Wright at Blackpool with a 16-14 win.

Snakebite started the brighter with a break in leg three with a fantastic 129 for the first break in the game. He got the second break at the next opportunity with an 100 checkout this time to extend the lead to 4-1.

Wright won the first leg of the next leg, and it was the only one in game with Dimitri going on a charge of his own. It wasn’t all plain sailing for Dimi, with leg 10 seeing both players miss four darts at a double before Dimitri levelled up the game.

The DreamMaker then continued his impressive run winning the next six legs to turn the game on its head. He made it ten straight legs to lead 11-5.

Peter Wright stopped the rot in style with 140 checkout including two tops. Going into the last break of the game, Snakebite was able to close the gap down to four with the scores at 12-8.

It was now time for a Peter Wright charge winning the next five, including a crucial break to move 13-12 in front. When you thought things was all going the way of Snakebite, The DreamMaker found his best of leg of the game to break straight back.

After three holds of throw, the crowd was expecting a fourth and a fifth and final interval. Dimi had other ideas and found a 14 dart leg to seal the victory.

Michael van Gerwen got the better of Nathan Aspinall in the Quarter Final for the second consecutive year.

The Green Machine looked back to his best at stages in the game, but the opening legs you couldn’t split them with the first seven legs all going with throw.

Michael did find the first break in the eighth punishing two missed darts from the Asp and winning a 17 dart leg. The Green Machine won the next four to lead before The Asp got one back to make the score 8-4.

Three more legs on the spin from MvG meant at the third interval it was 11-4 to Michael. The Asp fight back started with a 106 and 65 checkout. Nathan also found a 112 checkout to close the gap to just four to make it 13-9.

At this stage the crowd were totally behind Nathan and a 164 in leg twenty four only enhanced this. The crowd started playing a part in the game with booing seeming to have an impact on Michael, with Aspinall get the game back on throw and the scoreline at 15-14 it once more we thought we would have an interval.

Michael van Gerwen had other ideas and to despair of Nathan Aspinall and the Blackpool crowd, a 146 checkout and huge roar meant The Green Machine was back in a Matchplay Semi Final.