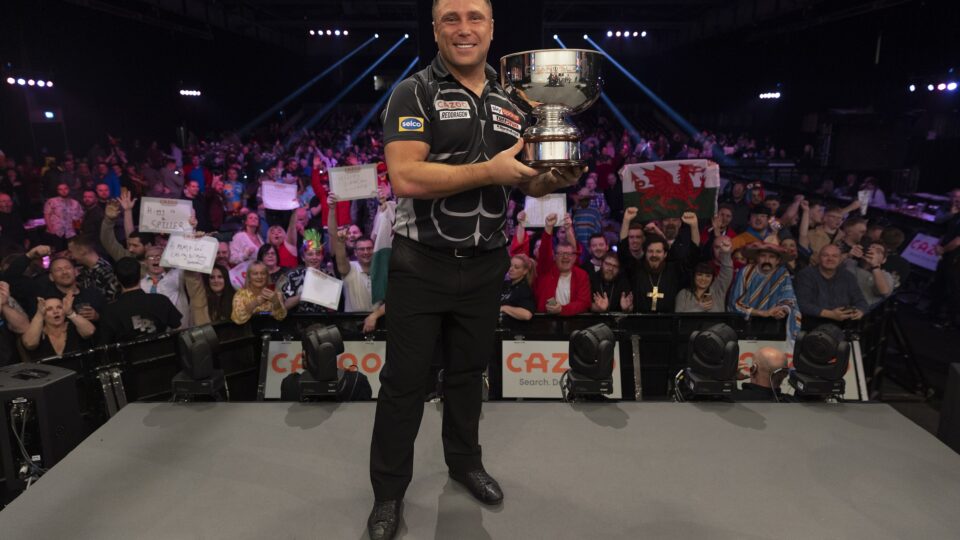 Gerwyn Price won his third Grand Slam of Darts title in four years at the Aldersley Leisure Village in Wolverhampton.

The Iceman, who had yet to win a TV title this year since becoming World Champion, comprehensively beat Peter Wright 16-8 in a rematch of the 2019 final.

Having also won the 2018 event against Gary Anderson, it means that Price is still yet to lose a knockout game at the Aldersley Leisure Village. The world number one beat James Wade 16-9 in the semi finals earlier on in the day, while Snakebite reeled off eight legs on the spin to come from 12-8 and defeat Michael Smith 16-12 in the other last four contest.

The Iceman made a statement of intent in the first leg, finding an excellent 140 checkout to hold. 27 darts later, he’d broken the Wright throw for the first time and held, going into an early 3-0 lead. The World Matchplay champion got on the board in the next leg, but Price held again to take a 4-1 lead the first interval.

Snakebite looked like he’d got back into the match at the start of the second session. He hit 56 to hold, and after leaving 36 after nine darts in the seventh leg, eventually hit double nine to cut the gap to 4-3. However, in the eighth, he missed double 18 for a 106 shot, and Price punished, hitting double 12 to go two in front once more.

It started a run for the now three time Grand Slam of Darts champion that saw him win five legs in a row. A 14 dart hold got him 6-3 ahead, before an excellent 10 darter broke the Wright throw again and go 7-3 ahead at the end of the second session. Back to back 13 darters made it 9-3, and despite squandering two darts for the leg, and Snakebite missing a dart to stop the rot, The Iceman found double four to go seven legs clear.

In the 14th leg, The Icmean squandered five darts to go five from victory, allowing Wright to find 65 and stop the rot. It did not change much though, as a 13 darter gave the Welshman an 11-4 lead at the third interval.

Snakebite found a 10 dart leg of his own to start the fourth session, but once again, it was the world number one that won it. Three further holds followed, before The Iceman hit another 14 darter to break, putting him within two of the Eric Bristow Trophy.

The Iceman went within one of the match after the resumption, but missed a dart to win it in the next leg. Wright then took out 88 to keep the tournament going, and survived four more match darts in the next leg, hitting a magnificent 155 to win the 23rd leg. However, it only delayed the inevitable, as Price found double 12 in the next leg to finally get over the line and win the 2021 Grand Slam of Darts Final.