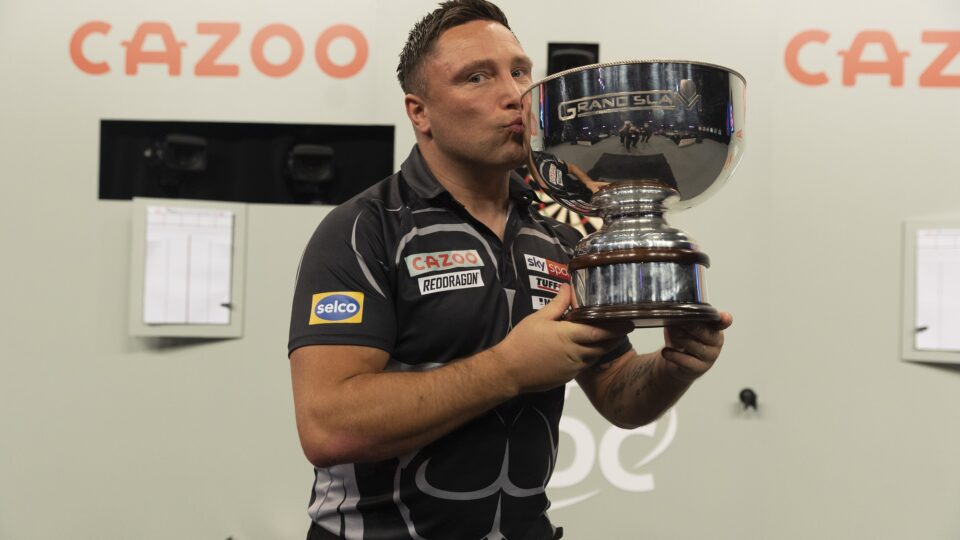 There are three certainties in life. Death, taxes, and Gerwyn Price winning the Grand Slam of Darts when the event is at the Aldersley Leisure Village.

After losing the Eric Bristow Trophy behind closed doors in Coventry last year, The Iceman regained it with comfortable victories over James Wade and Peter Wright on Sunday. After winning his maiden TV title at this event in 2018, and retaining in 2019, he moves level with Michael van Gerwen for second most Grand Slam of Darts titles, behind Phil Taylor.

What’s most significant however, is that this is The Iceman’s first TV title since winning the World Darts Championship in January. It also secures him the world number one spot for the rest of the year, and number one seed for the defence of the Sid Waddell Trophy at Alexandra Palace next month.

In short, Gerwyn Price could be peaking at just the right time to defend the biggest prize of them all.

Price builds throughout week to win Grand Slam of Darts

In many ways, this Grand Slam of Darts win for the world number one looks remarkably similar to his 2018 victory.

He started off slowly, fighting through a last leg decider against Nathan Rafferty, before blowing away Krzysztof Ratajski in his second group match. However, a defeat to Martin Schindler made many worry about whether it would be his week in Wolverhampton.

Those fears were pushed up a notch, after he went 7-6 down to youngster Bradley Brooks in his last 16 game. However, like the champion he is, he fought back, eventually winning 10-8. However, the big moment of the week came up in the quarter finals, where he faced World Cup teammate, and the man who thrashed him in the BoyleSports World Grand Prix final a month ago, Jonny Clayton.

Price took the lead in the match, and despite Clayton fighting back to level on four occasions, The Iceman outlasted The Ferret in an utter classic. It was his first win over his great friend since the World Matchplay, and it gave Price the confidence he needed.

It was a pace that both Wade and Wright could not keep up with. What started as a concerning week for The Iceman, turned out to be yet another championship week.

“He has freedom going to Minehead… and Alexandra Palace”

As stated, the win itself is massive for Price. Even though he’d taken victory in a couple of floor tournaments this year, it seemed that the pressure of being World Champion and world number one may have got to him in front of the big cameras.

Runner up at the World Grand Prix. Semi final at the UK Open. Quarter final at the World Matchplay and European Championships. A good year, yes, but you’d expect the man who’s the best player on planet darts according to the rankings to go and finish one of those off.

If there was ever going to be a tournament where he’d get over the line however, it would be this one. He loves this event, particularly at this venue. In fact, his loss to Schindler was just his third in his last 25 games at the Slam, and he’s still yet to be defeated in a knockout game at the Aldersley Leisure Village. Given the talk about whether the event will move from there next year, the Welshman will be pushing for that not to be the case, despite his comments on the crowds who, in this writer’s opinion, continue to boo and heckle him unfairly.

After this victory, he has freedom going to both Minehead next weekend for the Players Championship Finals, and Alexandra Palace next month, as he looks to join Phil Taylor, Adrian Lewis and Gary Anderson as the fourth player to defend the PDC World Darts Championship. As number one seed, he should have the best chance of anyone to do so. However, in a year as mad and as a varied in this, who know what will happen.

It may not be the dominant year that we saw from him in 2020, but make no mistake, this Grand Slam of Darts win could be the catalyst for a fantastic end to 2021 for Gerwyn Price.

He is still, the man to beat.