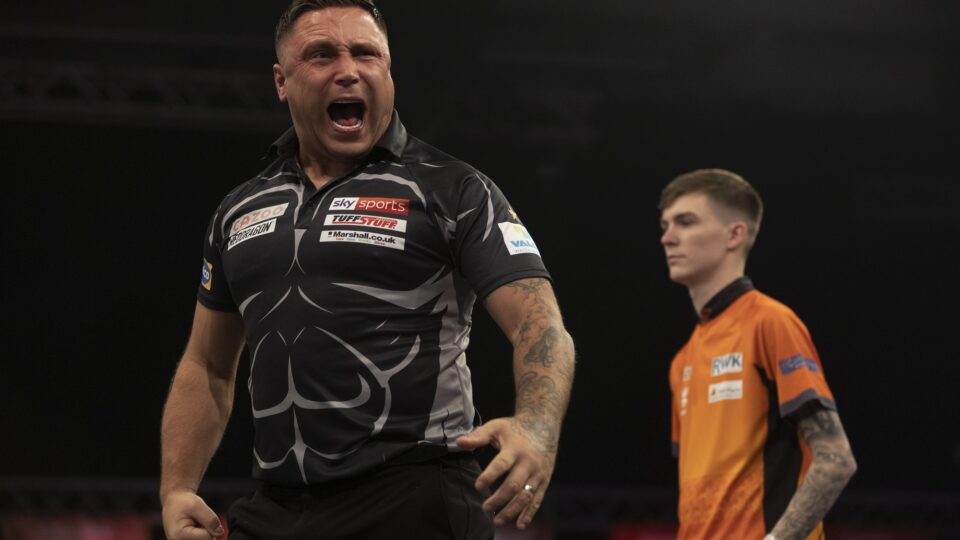 Gerwyn Price battled back from 7-6 down to narrowly avoid a last 16 exit against Bradley Brooks on night five of the 2021 Grand Slam of Darts.

The World Champion and world number one fell behind to the World Youth Champion in a tight and tense game, but won three of the next four legs to keep up his undefeated record in knockout matches at the Aldersley Leisure Village.

He will play fellow countryman Jonny Clayton in the last eight, after The Ferret came through Nathan Rafferty 10-2 in the final match of the evening.

The other quarter final on Friday night will be James Wade v Rob Cross, in a rematch of the Group C clash from earlier in the week Wade breezed past Rowby John Rodriguez 10-1, while Cross won 10-4 against Ryan Joyce.

Price battles back to beat Brooks

Despite being a huge favourite before the game, the World Champion was given a huge scare by World Youth Champion and UK Development Tour winner Brooks.

Price had darts to win each of the opening five legs, but had to settle for a 3-2 lead at the first session. After breaking in the first leg, and a 167 out in the second, he squandered a dart at tops in third, followed by two in the fifth, as Brooks kept in touch with the world number one at the end of the opening session.

Bam Bam then missed two for a level game in the sixth, as The Iceman hit a 70 to retain a two leg lead. Price found a 18 dart break, before Brooks broke straight back, hitting double two to cut the gap to two. Both players then held, meaning that the World Champion took a 6-4 lead at the end of the second session.

The game then swung back and forth in the third session. After hitting a 127 in the 11th, the World Youth Champion levelled with a 14 dart break, after Price missed darts to win it. Brooks then went ahead for the first time in the match in the next leg, hitting double six after both players squandered chances to go 7-6 in front.

However, Price showed the character of a world number one in the remaining legs. With Brooks on 65, he hit a huge 120 outshot, letting out a massive roar. After Bam Bam squandered three at double 14 in the next leg, a 60 shot from Price got him back in front again. The Welshman held, before he squandered four match darts in the 17th leg, allowing Brooks to hit double one and keep the match alive. However, a 14 dart hold eventually saw the Welshman over the line in a tense game.

Jonny Clayton won 10-2 against Nathan Rafferty to make the quarter finals of the Grand Slam of Darts for the first time since 2018.

A 148 in the opening leg from The Ferret was followed by The Natural hitting a 106 to level. Clayton held again, before taking advantage of four missed darts by Rafferty to go two clear. A 13 dart hold gave him a 4-1 lead at the first interval.

Rafferty squandered three more darts at double in the sixth, allowing Clayton to hit double 10 for back to back 13 darters. The Natural then produced a lovely 124 finish to break back, but back to back 25 outshots gave The Ferret a four leg lead. A further break of throw, this time on a 70 checkout, moved the Premier League and World Grand Prix champion two away from the match.

Clayton then rounded off the match with a fantastic 10 darter, before finding a 121 checkout to seal his place in the last eight. He averaged 104.3 during the contest, finishing 10/16 on the outer ring.

James Wade thrashed Rowby-John Rodriguez 10-2 to progress to the last eight for the second straight year, winning nine legs on the spin in the process.

Both held in 14 darts, before Wade started to take control of the game. Checkouts of 70 and 120 gave him a 3-1 lead, before double eight gave him a second break of throw, as he went 4-1 ahead with three straight 15 dart legs.

A whitewash session for The Machine then followed. He started it with a 101 outshot, and hit tops in the next leg for a fifth straight 15 darter. A 13 darter on the same double in the next leg moved him three away, before 56 and 80 checkouts got him within one of the match.

Little John did hit a fantastic 170 checkout to stop the rot, but it only delayed the inevitable. The three time finalist at this event found double 10 for a 16 darter to complete the rout, ending 10/15 on the checkouts.

Rob Cross beat Ryan Joyce 10-4 in the first match of the night to make the Grand Slam of Darts quarter finals for the second time in his career.

Joyce looked the more settled to start the match. He ended the first session with a 104.30 average, taking a 3-2 lead into the first interval as neither player could break in the opening five legs.

However, Cross effectively won the match in the second session. After holding with a 121 checkout in leg six, he took advantage of a missed dart at tops from Relentless in the seventh, hitting 32 for the first break.

An 11 dart hold, followed a 14 dart break, saw Voltage win his fourth leg in a row, before he then found double four for a fifth straight leg and a 7-3 lead at the second interval. The former World Champion averaged 112.16 over the five legs.

Voltage then checked out an excellent 116 shot straight after the restart, to go three breaks of throw ahead. Both then held, before Cross hit double eight to round off the comfortable victory.