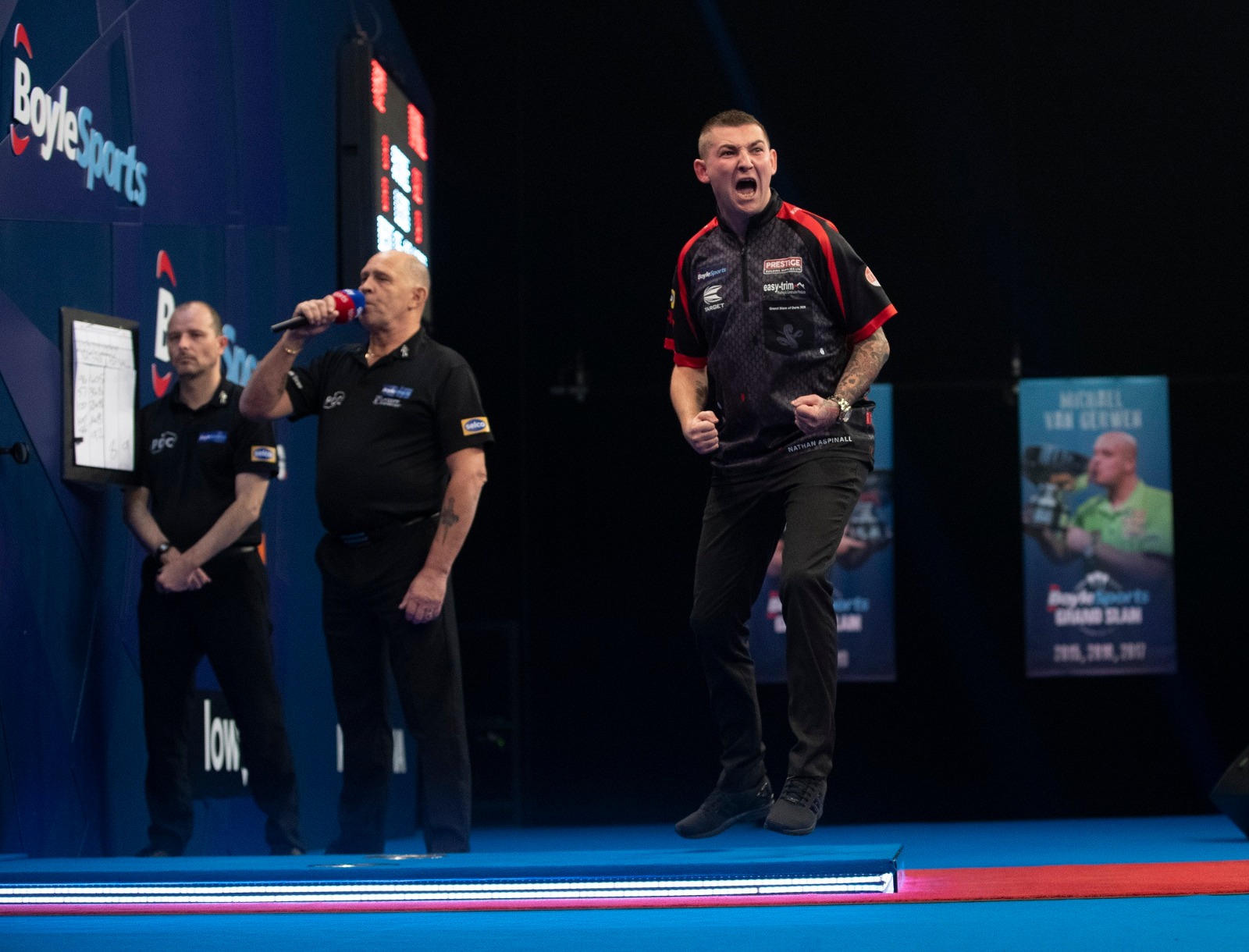 The Welshman entered the tournament having last lost in the event in 2017. His hopes of a three-peat came to an early ending as The Asp held off a fightback to progress to the Quarter Final stage for the first time.

Aspinall is yet to really produce his top form in 2020. The former UK Open champion found himself in the last 4 of the Premier League, but struggled for form on TV for the rest of the year, not making it past a last 16 before this week.

The match started in expected fashion, the pair trading holds for the first session, each one accompanied with their signature roar of emotion. The outcome, Aspinall leading 3-2 at the break.

The second session changed the game completely. Aspinall romped ahead to a 7-3 by the end of it, just the one break of throw needed to ensure the gap stretched to 4 legs.

Price hit back with a sensational run of 5 legs in a row. Each accompanied with a burst of emotion that grew louder and louder as his grip on the game started to flip back into his favour. For just the 2nd time in the entire match, Price lead at this point.
Aspinall managed to stop the rot in leg 16, levelling up the match and putting the game back on throw. Advantage Price.

That advantage failed to hold, as Aspinall took advantage of missed dart for a 110 checkout. He backed that up with a superb finish of 93 for the match. Once again taking advantage of more misses from Price.

Michael van Gerwen was imperious on his way to the Boyle Sports Grand Slam of Darts Quarterfinals.

The world number one defeated long time rival Gary Anderson 10-2 to book his spot in the next round, and stay in the hunt for a fourth Grand Slam title.

It has been widely reported the struggles Anderson currently faces with regard to his health. The Scot has damaged cartilage in his left knee, meaning just making this stage of the tournament is impressive enough. However, even fully fit Anderson would have had his work cut out for him.

Van Gerwen eased into a 4-1 lead at the first interval. The only leg he lost being a 12 dart hold of throw for his opponent.
The second session came and went in just as quick fashion as the first. This time the green machine swept all 5 legs on to his tally, winning them in just 71 darts thrown.

Anderson emerged from the second interval with another 12 dart hold of his throw, but it was far too little too late for the former 2 time world champion, who’s hunt for a Grand Slam title goes on for another year.

Van Gerwen’s reward for his victory is another showdown with Simon Whitlock. The Australian number one has accounted for Van Gerwen’s exit from the last 2 televised events and will be hoping to make it a hat-trick when the pair face off again tomorrow.

New Australian on the block Damon Heta beat Devon Petersen to reach the Quarter-Finals on his Grand Slam Debut.

The duo have plenty in common aside from being debutants in this event. Both are from Nations within the Southern-Hemisphere, and both are experiencing cracking 2020’s so far.

Petersen will have been seen by many as the pre-match favourite. His win on the Euro tour a few weeks back, as well as a run to a pro tour final just before that have seen him shoot up the Order of Merit and break in to the top 32.

However, as has become a bit of a trait of the African Warrior’s game of late, he started slowly, finding himself 4-1 down at the first interval. Heta extended the advantage to 4 legs at the second interval, pushing the score out to 7-3 and looked like he would cruise to victory, settling in to the task at hand in a James Wade like manner.

Petersen did eventually string together a burst of legs, winning 3 in a row in 44 darts. The comeback was short lived though as Heta immediately stopped the rot, with two holds of throw.

The Australian eventually finished with a 94 average and hit 50% of his doubles. He’ll be looking for a similar performance as a minimum as he goes head to head with James Wade in the next round. His first ever TV match in a best of 31 leg format.

Bully Boy Michael Smith triumphed in the battle of the England World Cup of Darts team.

After winning 2 events at the Winter series the St Helens ace has been in good form of late in comparison to the up and down Cross.

That looked to be the tale of the match from the very beginning as Smith broke the Cross throw at the first time of asking to lead 2-0.Voltage responded straight back with a break of his own and then won 3 legs on the spin to lead at the first interval.

For large parts of the game Cross looked the more comfortable man, as the pair traded holds of throw all the way to the 15th leg. That comfort soon evaporated as Smith stole leg 15 with an 18 dart break. The world number 4, seemed to use that as springboard to race away with the match. backing the break up with a solid hold before really going on the offensive in leg 17.

Match darts came and went for Smith, leaving himself just 16 after 9 darts. The Englishman squandered 3 in hand at the target allowing Cross to return for an attempt at the 70 points he had left himself. The drama continued as Cross slipped in to the T4 segment, but then cleaned up to take the leg.

Cross forced a decider with a 13 dart break of throw, phenomenal darts under the pressure, but despite having the darts in the final leg, fell away and allowed Smith a comfortable opportunity for the match.

With that win Smith now sets up a Quarter-Final clash with Jose De Sousa as he remains in the hunt for his first PDC televised major title.