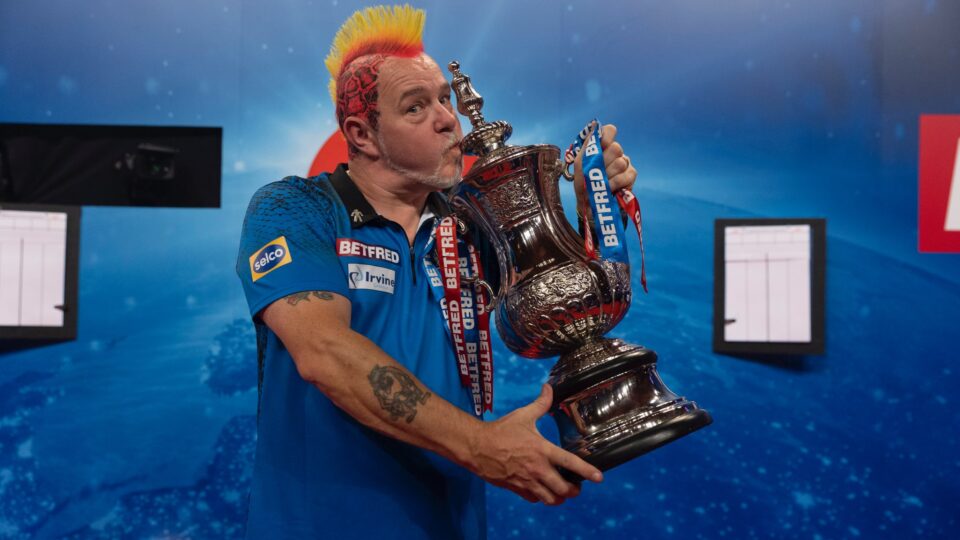 After a truly dominant week at the Winter Gardens, Wright produced another brilliant display to win 18-9 to take home the Phil Taylor Trophy for the first time.

He averaged 105.9 in the match, and ended the tournament with a 104.91 average, the fifth highest in the event’s history.

Wright takes control from the outset

It was Snakebite who started the brighter, holding before taking advantage of four missed darts at a double by Van den Bergh to break. Two holds followed, before The Dream Maker missed three darts to get the game back on throw. Wright punished, hitting tops for a 4-1 lead at the first interval.

Van den Bergh held out of the interval, before Snakebite took control. After holding, he broke in 11 darts, before hitting 80 and 76 checkouts to move 8-2 in front at the second interval.

Wright then missed five darts to take a 9-2 lead, as Van den Bergh hit double six to get a break back. Both held, before Snakebite produced a sensational 10 dart leg to break. The Dream Maker though hit an 87 checkout on the bull to break straight back, making it 10-5 at the second interval.

Wright left tops after 12 in the 16th leg, but did not get a go at it, as Van den Bergh pinged a 96 shot to move within four. Both then held twice, before an 80 checkout with The Dream Maker on 64 gave Wright a five leg lead once again. The Belgian did not give up though, finding double 13 to get the game back to 12-8.

However, the fifth session saw the game effectively won by Snakebite. After holding in 11, he took advantage of 11 missed darts across three legs from Van den Bergh to reel off four straight legs. He then found an 84 shot on the bull to move one away.

Wright then left himself on double eight for the title in the next leg, but Van den Bergh found an excellent 105 checkout to extend the game. It did not stir a comeback though, and despite missing double 18 for a 156, the former World Champion hit double nine to become the 2021 Betfred World Matchplay winner.