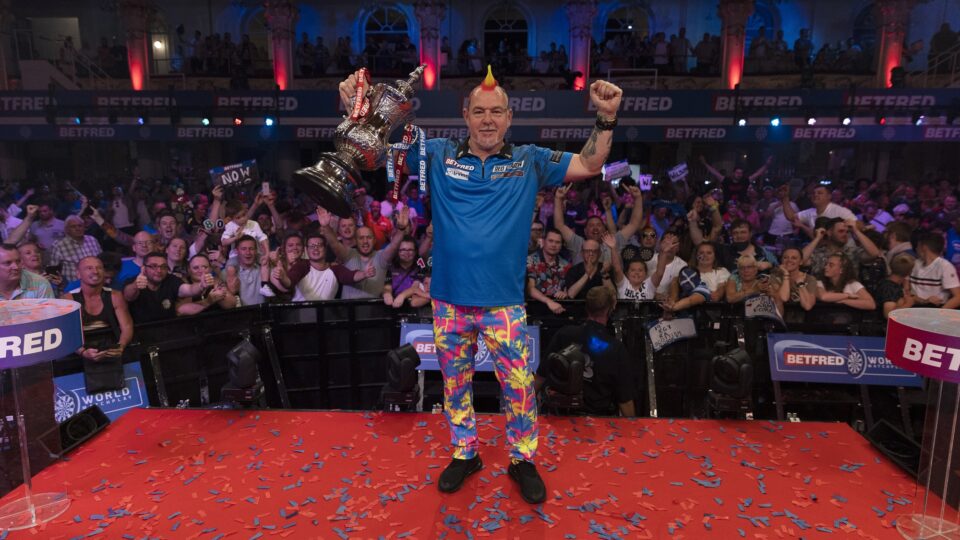 If you talk the talk, you’ve got to walk the walk, and at the Betfred World Matchplay, Peter Wright certainly did that.

After winning against Michael van Gerwen in the final Pro Tour event before this special tournament, he proclaimed he would win the World Matchplay and the World Darts Championship with his new darts.

He’s kept one half of his proclamation true. He topped off a dominant week in Blackpool with an 18-9 win over his former lodger, Dimitri Van den Bergh, to win the Phil Taylor Trophy for the first time.

After opening his mouth before and not backing it up, for once, Wright’s words did not come back to haunt him.

I try to not show opinion when writing pieces, particularly these ones. However, when Snakebite said what he said after the final Pro Tour, I’ll be honest, I scoffed.

However, he’s easily been the best player over the last nine days at a largely sweltering Winter Gardens. He breezed past Danny Noppert in the first round, before making a 105 average look pedestrian against Joe Cullen in round two, after Cullen had shared the same thoughts I had in the build up to the game.

A demolition of Michael Smith followed in the quarter finals, leading to a semi final showdown with old rival Michael van Gerwen. After losing to him at the same stage six years ago, Wright produced the highest average ever seen in a last four game at the World Matchplay. He hit a 110.37, beating MvG for the first time on the Blackpool stage in a classic game.

All this led to the final with Van den Bergh, who’d stayed with Wright during the first coronavirus lockdown as he could not go home to Belgium. It was a final full of quality, played between the two best players of the week.

The Dream Maker credits staying with Snakebite last year as to one of the reasons why he won this tournament 12 months ago. But, like four before him, he just could not live with Wright, as Snakebite capped off one of the best weeks of his career with victory.

The stats are ridiculous. A tournament average of 104.91, the fifth highest average ever seen at this event. 41 180s. 31 legs dropped. This rivals the truly great week’s we saw from a certain Phillip Douglas Taylor at this event. The simple fact is that in this year’s Betfred World Matchplay, Snakebite was untouchable.

“After this week, Wright might just keep the second part of his promise”

If you watch this sport regularly, you’re fully aware of Snakey’s tendencies to change his equipment at a moment’s notice. He even did that against MvG in the semi final, before producing a 149 checkout in the next leg.

Before he won the World Darts Championship in 2020, his manufacturer Red Dragon produced new darts for him, and he went and won it. The same happened here, and he not only won the Betfred World Matchplay, he did so barely being tested. The only time he was ever behind in a game was in the opening leg of his round one clash with Noppert.

These darts are clearly the ones he should use for the future. The test for Wright now, is to stick to them. He’s openly admitted he likes to tinker, but when you’ve just averaged 104.9 to win the second biggest ranked event of the year, surely, surely, something has to give?

After this week, Wright might just keep the second part of his promise too. He’s defending £500,000 at the Alexandra Palace this year after winning two years ago, but that could remain on his world ranking come Tuesday 4 January 2022. He could also be world number one for the very first time, which would cap off a fantastic career for him.

If he does stick to this set of darts, he could be world number one before the World Championship. No one got near him this tournament, and even if he does not stick to these darts, the Betfred World Matchplay will not be the last TV event he wins this year.

The Boy Who Cried Wolf was eventually right. Perhaps, this time, we should all be listening to Snakebite more seriously.