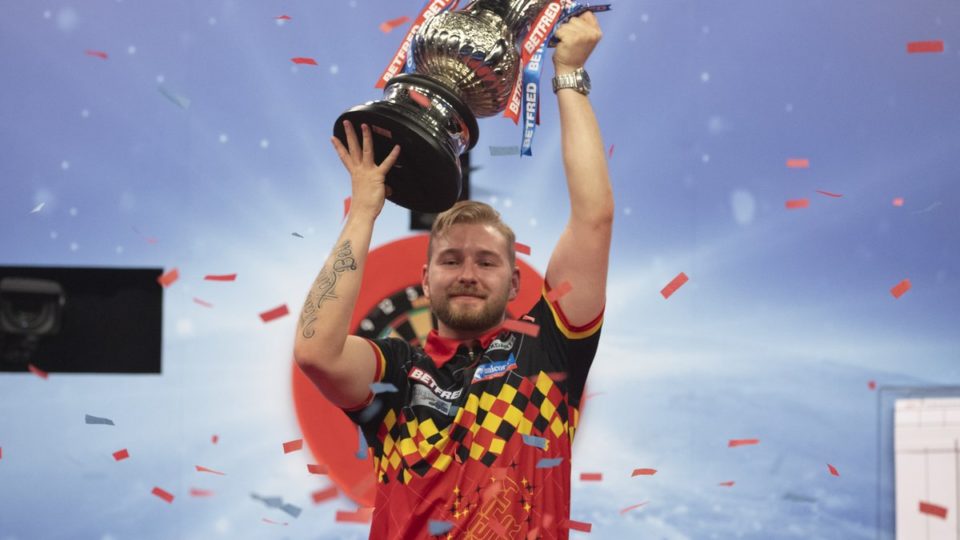 The Dream Maker won his maiden TV title with a fantastic performance, which saw him win 10 of the last 13 legs. He’s the first player to win a PDC World Youth Championship and a televised PDC major title.

Van den Bergh also became the first Belgian player to win a televised PDC major, which moves him up to number 12 in the world. Anderson, the 2018 World Matchplay champion, drops one place from where he started the tournament, to number 9.

Both Anderson and Van den Bergh began cautiously in the 2020 World Matchplay final. Anderson was the first to break to go 2-1 up, but missed three darts to consolidate it and go 3-1 ahead. Van den Bergh would level at 2-2 thanks to a D8 outshot, before holding his throw to take a 3-2 lead at the first interval.

The next five legs saw little drama, with both players holding their throw. The highlight of the session came when Van den Bergh hit a 121 outshot to win the ninth leg, but the score was level at 5-5 after 10 legs.

Anderson came out of the next break quickly, breaking the throw to go 6-5 up with a magnificent 130 out. However, the Dream Maker would fire straight back in the 12th leg. With the Flying Scotsman on 82 to hold his throw, Van den Bergh produced a brilliant 170 checkout from nowhere. He reeled in the big fish, and got the game back to 6-6. Despite both players missing chances to break in the next three legs, three holds followed. This meant that Van den Bergh lead 8-7 at the end of the third session.

It was tight and tense for the first three sessions, but Van den Bergh won the match after the third break. He broke Anderson’s throw for a 9-7 lead straight after the restart, and then held his throw to go 10-7 up. Anderson got a leg back to fall 10-8 behind, but that was the last leg he would win for a while.

The Belgian showed his class, producing some magical scoring. He did not allow the Scotsman a shot at a double for the remainder of the session, as he won the remaining two legs to go 12-8 up after 20 legs. After the fourth interval, back to back checkouts of 124 and 132 on the bull gave Dimitri a 14-8 lead, before winning another to go 15-8 up.

The pair then traded holds of throw to make the game 16-10, but by then the damage was done. Van den Bergh would hold his throw to go within one of the match, before finding D16 in the 28th leg to win his first senior PDC TV title.

Speaking after the win, Dimitri Van den Bergh told Online Darts: “The Phil Taylor World Matchplay trophy is mine! I’m part of that! My name is going to be on there. I’ve made my dreams come true.”

The runner up Anderson also told Online Darts: “I was terrible, but these things happen. It’s a long time since I’ve played as bad as that. But, take it on the chin, and go onto the next one.”