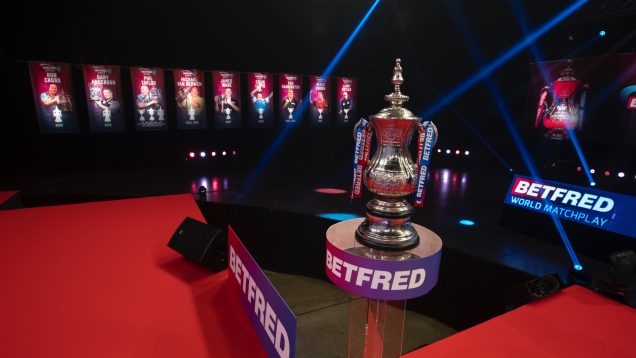 The PDC have provided an update for ticket holders on the 2021 Betfred World Matchplay on Saturday, July 17 and Sunday, July 18.

The PDC has permission to hold 803 people for the three sessions over those two days as of Friday, June 25. This is below the normal 2000 capacity that the Winter Gardens would have on a normal night.

As it stands only around 40% of ticket holders will be able to attend the open three sessions of the Betfred World Matchplay.

The PDC regret to announce that due to the logistical impracticalities of enforcing social distancing with spectators who have standing tickets, all purchasers of standing tickets for those two days will be contacted next week and offered a deferral of their tickets to the corresponding session in 2022, or a full refund.

All remaining seats will be allocated by way of a random draw amongst ticket holders across both remaining categories of ticket – table and balcony. This draw will take place early next week and ticket holders will be notified directly of the outcome of the ballot.

Ticket holders will only be placed in the draw to which their purchased tickets relate, and the draw will be for complete groups (i.e. if you purchased six tickets, you will receive either six, or no tickets in the ballot). If you have purchased tickets for different sessions across these two days, each purchase will be treated separately as each session is drawn separately.

If it becomes possible for the capacity to be increased again before the event, ticket holders who missed out in this ballot will be given priority to purchase any tickets which were not previously available.