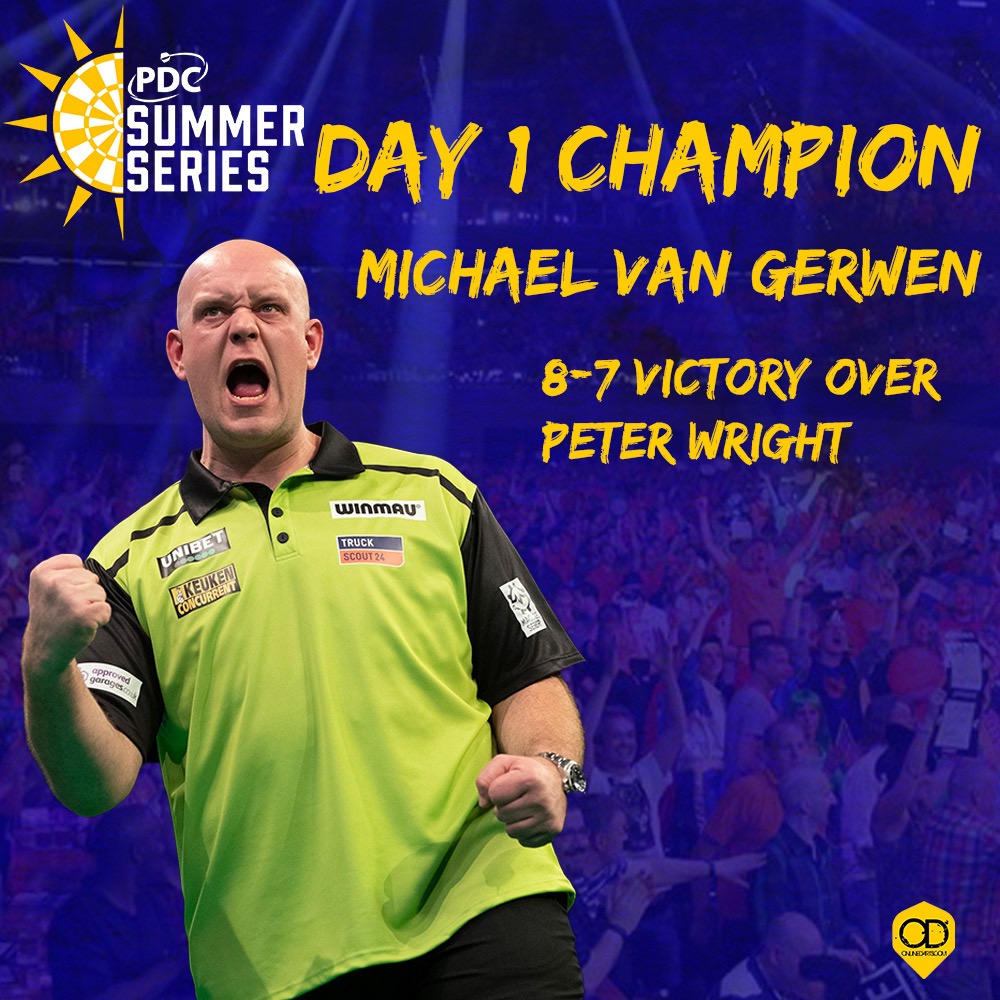 Michael Van Gerwen produced a stunning comeback against Peter Wright to win day one of the PDC Summer Series.

The world number one was 7-5 down, but didn’t allow the world champion a match dart, to take a 8-7 victory and his first Players Championship title of 2020.

Aside from the top two meeting, day one also saw:

MvG back to his best

The Green Machine hadn’t won a Pro Tour title this year heading into the first day at Milton Keynes, leading to questions about whether he had lost his aura.

But the Dutchman looked in imperious form throughout. After comfortably beating Ciaran Teehan 6-1, he survived a match dart against William Borland to come through 6-5.

He then followed up with a 6-4 victory over Callan Rydz, in the game of the day which saw both players average over 106.

Once through his board, van Gerwen dispatched Jamie Hughes 6-1 and fellow Dutchman Danny Noppert 6-0, before averaging 107 against Gabriel Clemens to win his semi final 7-3, despite missing a D12 for a nine dart finish.

In the final against Wright, the world number one started strongly, going ahead 5-2. The match then turned on a 112 checkout from Wright, which saw the world champion win five straight legs to go 7-5 up and on the brink of the title.

But Van Gerwen would not let Wright have a match dart, as he reeled off the final three legs to win 8-7 and take home the £10,000 top prize.

Speaking after his win, MvG told Online Darts: “Peter had a couple of really good finishes and I missed a few darts at a double here and there. But you have to win eight legs, not seven. Simple as that.

“I played well. People know my capabilities. They know what I’m capable of. I don’t have to prove anything.”

Wright falls at the final hurdle

It was fitting that after 100 days of waiting, the first final after the restart saw the world’s top two do battle.

Peter Wright started the day very slowly, with a 6-5 win over Ron Meulenkamp, and then a 6-3 victory over Derk Telenkes.

A 6-3 win over James Wilson saw the world champion win his board, and then he never looked back. After going 2-0 down to Rob Cross, he won six straight legs to take the match. This saw him into a quarter final against Glen Durrant, with Snakebite winning 6-3 in a high quality affair.

He then went 7 darts into a nine dart finish in a fantastic semi final performance against Krzysztof Ratajski, which he won 7-3. Unfortunately for Snakebite, he just couldn’t quite get over the line against van Gerwen in the final.

It was a dramatic day of the PDC Summer Series, which saw loads of big names fall in the first round including:

Adrian Lewis also fell in the first round to Eddie Lovely. This started the challenge tour player’s run to the last 16 of the event, beating Michael Smith in his board final.

Ian White fell in the second round, as did the number one seed Gerwyn Price, which means they could potentially have tough opening round matches tomorrow.

A run to the quarter final for Danny Noppert has seen him all but secure his place at the World Matchplay, and Gabriel Clemens’ semi final appearance means he’s in a good position to qualify too.

Ricky Evans has pushed Kim Huybrechts out of the Matchplay qualification places after his last 16 run, and he now occupies the final position.

A last 16 appearance by Darren Webster has also potentially put him back in the running to make the prestigious tournament.

How can I follow day two of the Summer Series?

We’ll have day two, and the rest of the Summer Series, covered at Online Darts.

There will be a live blog from 11.30am giving you results and ranking changes as they happen.