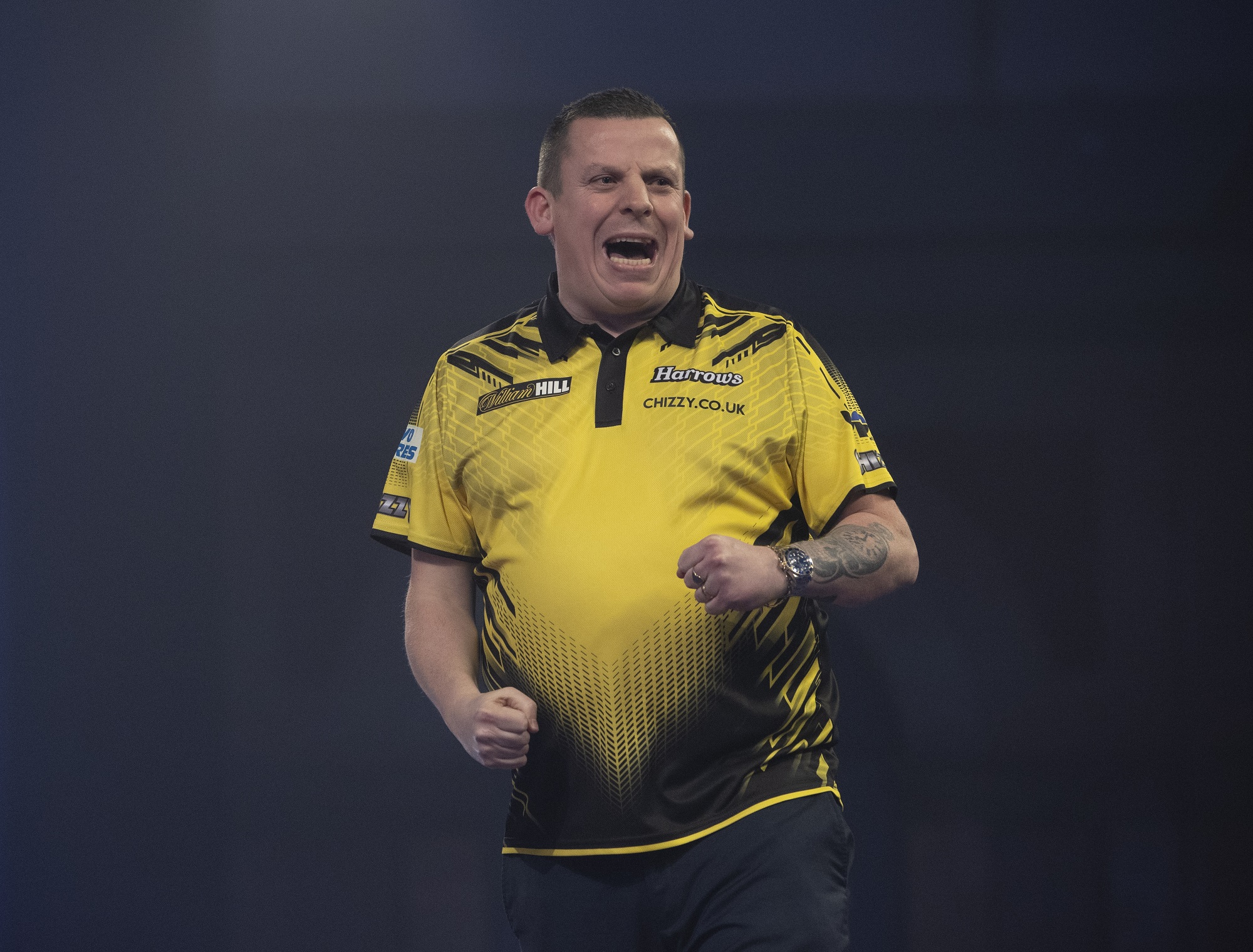 Chizzy produced the performance of his life, where he simply outplayed The Green Machine from start to finish, whitewashing MvG 5-0.

Things were not as simple for Gerwyn Price. He had to survive a last leg decider against Daryl Gurney, as he prevailed 5-4 to make a second straight semi final at the event.

Elsewhere, the other two quarter finals of the World Darts Championship saw:

Chisnall had not beaten Van Gerwen on TV for 2,639 days, at the 2013 World Grand Prix. Tonight, he produced the best performance of his career to get his first win over the world number one in 28 games.

MvG broke in the first leg of the match, but that was as good as it would get for the three time champion. Chizzy broke back immediately in 11 darts, and was one set to the good 24 darts later, winning the next two legs with 141 and 95 checkouts. The second set saw Chisnall go 2-0 ahead, but miss four darts in two legs as MvG levelled and forced a deciding leg. The Yellow Warrior eventually hit double 16 to take the set 3-2 and increase his advantage.

Van Gerwen looked to have responded in the first leg of the third set, setting up double four. However, Chisnall stunned the world number one with a 114 checkout to hold. Once again, he went 2-0 up, and once again MvG pulled it back to 2-2, including a 150 checkout. Under pressure though, Chizzy found an 86 outshot to take another set 3-2 and go 3-0 in front.

Chizzy continued to put the pressure on, breaking at the start of the fourth set in 11 darts, before two holds from the St Helens man put him on the cusp of the famous upset. Two 12 dart holds, before breaking the Van Gerwen throw in 15 darts, saw Chisnall complete the famous whitewash and set up a meeting with Gary Anderson in the semi final. Chizzy averaged 107.34, and hit 14 maximums, to make the last four for the first time.

Gerwyn Price came through his second last leg decider of the tournament to win his World Darts Championship quarter final. He beat Daryl Gurney 5-4 in a fantastic game.

The Iceman came out the blocks firing in the first set, punishing a missed dart from Gurney to break. A 108 checkout saw him hold and despite missing five darts for the set across two legs, he eventually found double six to wrap it up and go in front.  46 darts later, Price was two sets to the good, wrapping it up 3-0.

Superchin responded brilliantly in the next two sets. He broke at the start of the third with a 79 finish, and then held twice to take the third and trail 2-1. Gurney then held twice to lead the fourth 2-1, before punishing four missed darts from Price to win the set 3-1 and level the match at 2-2.

However, key darts at double were missed by the Northern Irishman in the next two sets. He had chances in the first and third leg of the fifth, and then squandered five to send it to a decider. Price held twice, before winning it with a spectacular 143 checkout to go back in front once more. The World Grand Prix winner broke at the start of the sixth, before an excellent 11 darter from Superchin saw him get the break back. Two holds saw the set enter a decider, where Gurney missed tops for a 116. Price returned on 72 and despite straying into the single seven, found treble 15 double 10 to go 4-2 up, letting out a massive roar.

Gurney would not relent easily though, taking advantage of missed darts from Price in the seventh set to win it 3-0 in 48 darts and get the game back on throw. The Iceman then missed four darts to break in the opening leg, and Superchin held. 31 darts later, he’d levelled the contest, finding a 12 dart hold to send the match to a deciding set.

The ninth set began with Gurney setting up 33, but Price found an astonishing 107 checkout to hold throw in 15 darts. Superchin responded with a 130 of his own, before two holds sent the match to a deciding leg. There, a 139 from The Iceman set him up on tops and when Gurney could not find a 108 outshot, he pinged it first dart to win an utter classic and set up a semi final with Stephen Bunting.

Gary Anderson swept aside Dirk Van Duijvenbode 5-1 in the quarter finals of the World Darts Championship. It was one of The Flying Scotsman best performances in recent years, as he won 15 out of the next 19 legs to see off The Titan and book a place in the last four for the fifth time in seven years.

The Flying Scotsman had the darts in the first set, but surrendered a 14 dart break of throw in the first leg to Van Duijvenbode. The Aubergenius then found two straight holds to take a 1-0 lead.

However, that would be the only blot on an otherwise perfect day for Anderson. He broke the Van Duijvenbode throw in 14 darts in the first leg, and while the Dutchman broke back, he reeled off two straight legs to level up the contest.

Anderson then took control of the match after the second interval. He reeled off the third set 3-0 in 48 darts, denying his opponent a shot at a double in all three legs. It took Van Duijvenbode until the third leg of the fourth to get another chance at the outer ring, but missed double 18 for a 115. Anderson then came back and found double seven for his eighth straight leg, winning the fourth set 3-0 in 43 darts and going 3-1 up.

Two more legs followed for The Flying Scotsman at the start of the fifth set, including a tops tops finish for a fantastic 131 checkout. Despite Van Duijvenbode getting his first leg in 11 to make it 2-1, he could not capitalise on three missed darts from Anderson to level and force a decider. Anderson then came back and hit double ten, to win the set 3-1 and go within one of the match.

Anderson broke in the opening leg of the sixth, before Van Duijvenbode hit a 109 to break back and level. Two further holds followed to set up a deciding leg, where the Scot left 40 after 12. Despite a 180 to leave five from the Dutchman, Anderson would ping tops for a 13 darter to win the set 3-2 and the match 5-1, averaging 101 in the process to set up a showdown with Chisnall.

Stephen Bunting survived a late fightback from Krzysztof Ratajski to win a PDC World Darts Championship quarter final for the first time. He came through 5-3 to book his place in the last four.

Ratajski came out the blocks quick, breaking Bunting’s throw in the first leg. However, The Bullet would ultimately be the one to settle the best. He broke straight back, held and when The Polish Eagle missed to send the set into a decider, hit double 18 to take a 1-0 lead.

Bunting then further pressed home his advantage, winning the second set 3-0 in just 39 darts including a 127 checkout. Ratajski would break again at the start of the third for his first leg in seven, but missed another dart to hold. The Bullet broke back, and then held twice to go ahead 3-0 in the match.

The Polish Eagle finally got on the board in set four, punishing a missed dart at double 16 from Bunting to eventually take it 3-2 and trail 3-1. Ratajski then went 2-0 up in the fifth set and looked as if he would get the game back on throw. However, Bunting held, before a spectacular Big Fish 170 checkout saw him break the throw. That seemed to hurt Ratajski, who could not stop The Bullet finding a 14 darter to hold and steal the fifth set 3-2.

Despite being one away from the match, The Bullet had to deal with a fightback from Poland’s number one. Ratajski won six of the next eight legs, including a lovely 124 checkout, to get the game back on throw and trail 4-3. The Polish Eagle had the darts for the eighth set, but Bunting found a 12 darter to break in the opening leg and did not look back. 29 darts later, he’d sealed the set 3-0 and won the match 5-3 to be the first player into the semi finals.