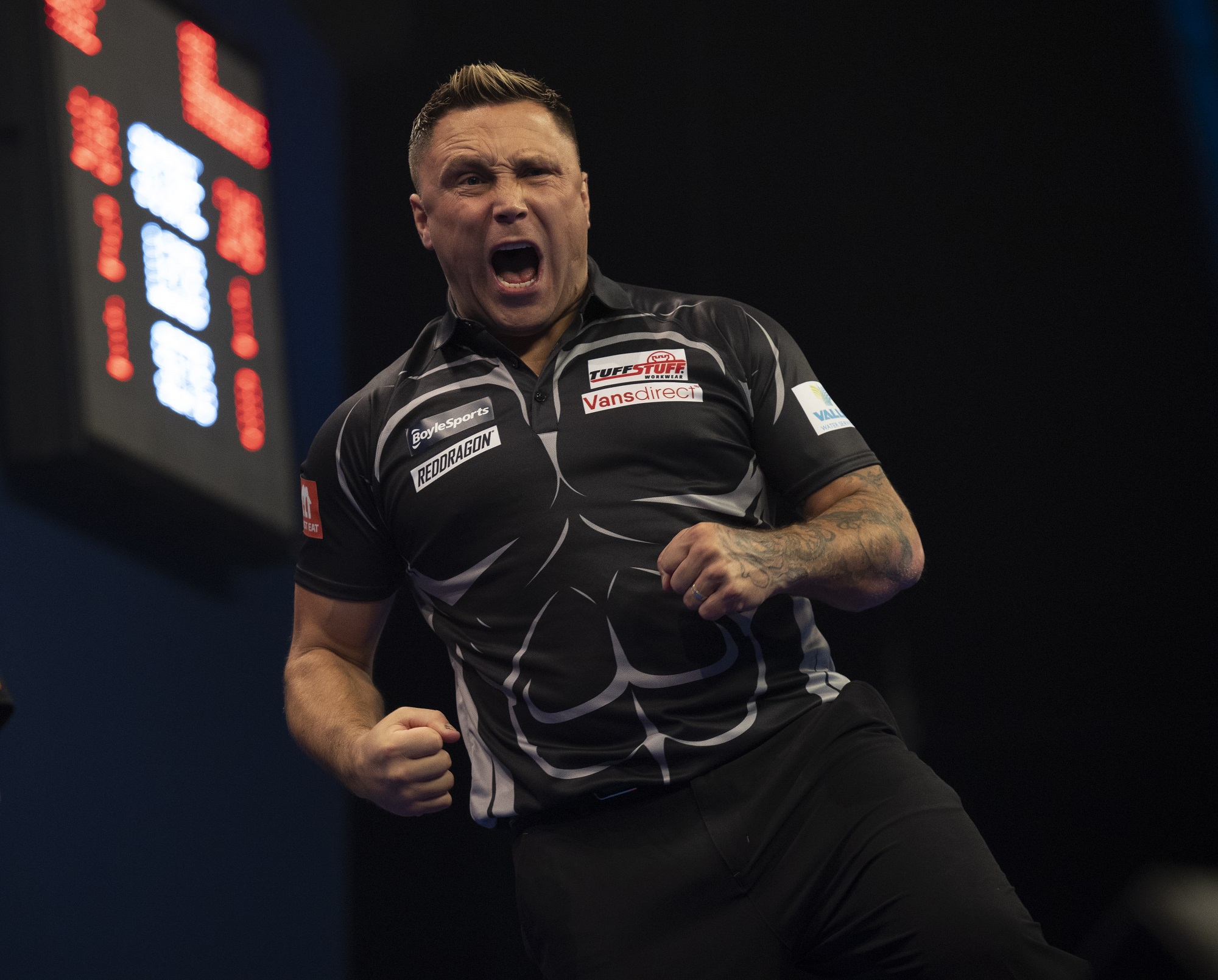 Gerwyn Price won his eighth title of 2020 on day three of the PDC Winter Series.

The Iceman battled hard all day, eventually prevailing 8-6 in the final against Australian Damon Heta at the Ricoh Arena in Coventry.

Price, having won the World Cup of Darts on Sunday alongside Welsh teammate Jonny Clayton, will have the day off tomorrow before playing in Saturday’s event. He’s now moved back to the number one seed position for the Players Championship Finals later this month.

Iceman victorious despite not being at his best

After going out early in the first two days, Gerwyn Price was determined to put things right on day three of the Winter Series. After receiving a bye in round one, he opened his campaign with a tight 6-5 win over Reece Robinson. He won board one with a 6-1 victory against Gavin Carlin.

Price then picked up the pace in the next two rounds. A 6-0 win against Jeff Smith, and then a 6-4 victory over Stephen Bunting, saw him into the semi finals against William O’Connor. There, Price broke in the first leg and never looked back, cruising to a 7-3 win.

That set up a final against Heta, who had averaged below 95 just once during the day prior in his 7-5 semi final victory over Callan Rydz. Price seized advantage in the first leg, breaking to go 1-0 up. However, The Iceman missed three darts to hold his throw, allowing the Heat to immediately break back to level at 1-1.

Heta had won his previous two finals before this one, and looked at home in this match. He held throw well, but could not take the opportunities presented to him on Price’s throw as the match reached to 3-3. Price then started to find his scoring, as both players continued to hold solidly to get the game to 5-5.

Price thought he found the crucial break in the 11th leg. Leaving 40 after 12, he hit tops to go 6-5 up. However, once again he missed darts to consolidate the break, allowing Heta to hit double 19 to level once again at 6-6.

The Heat though could not find a finish from 100 in the next leg, allowing the Welshman to break once again with a 66 checkout. The 14th leg saw both players miss multiple darts, but Price eventually hit double five to seal an 8-6 win and take home Players Championship 21.

A first senior semi final run for Callan Rydz saw him all but secure his place in the Players Championship Finals later this month. He needs one win tomorrow to move onto £10,000 in the Order of Merit, which will be enough to get back to Coventry.

Vincent van der Voort made the last 16 on day three of the Winter Series, but could not beat Ian White to move into the quarter finals. This leaves him £250 behind Jermaine Wattimena in the race for the 2020 BoyleSports Grand Slam of Darts spot on the Winter Series Order of Merit.

Krzysztof Kciuk made a maiden PDC Pro Tour quarter final, becoming the 300th different player to do so. He’s had an excellent week so far, and continues to push for a potential Grand Slam and Players Championship Finals place.

For the second day running, a number of big names fell in round one. These included:

In addition, Peter Wright and James Wade both suffered exits in round two.

Finally, congratulations to Nick Kenny, who became the third player to hit a nine darter at the event. He achieved the feat in his 6-3 defeat to World Matchplay champion Dimitri Van den Bergh.

Gerwyn Price received a bye into round two, as Gary Anderson withdrew due to a knee injury.

So here we go, the final opportunity to make tomorrow nights final.