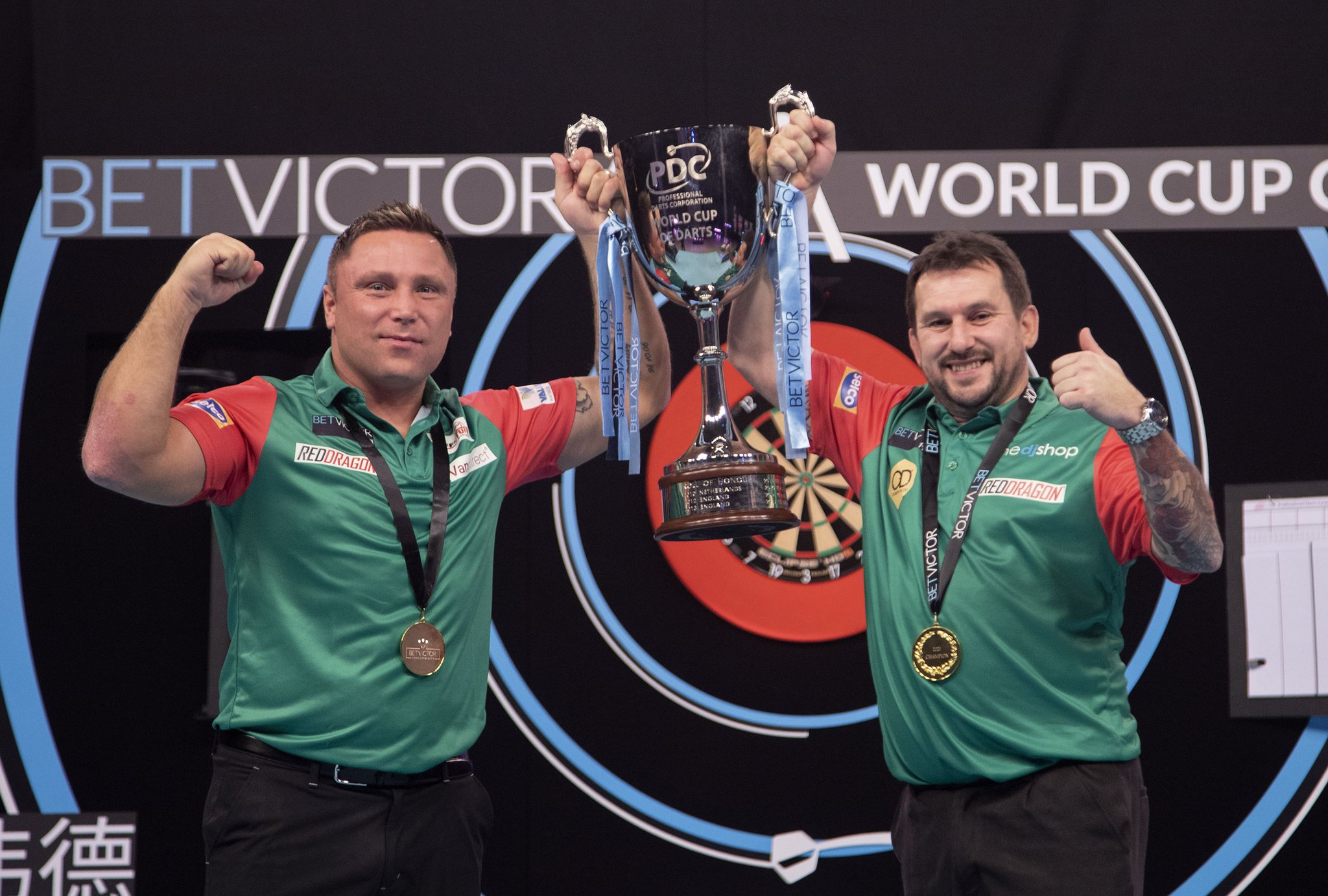 The pair defeated Team England’s Michael Smith and Rob Cross 3-0 in the final in Austria.

This the first time Wales have won the prestigious event. It also means that Clayton will join Price in next week’s Grand Slam of Darts.

Earlier in the day, Wales had knocked out Australia in the quarter finals and Germany in the semi finals. England had reached the final by beating host nation Austria in the last eight, followed by Belgium in the last four.

Gerwyn Price got Wales off to the perfect start in the 2020 World Cup of Darts final.

Michael Smith missed a bullseye for an 84 outshot, and Price took advantage, hitting bull himself for a 70 shot to lead 1-0. Smith levelled, before missing a dart at tops to break again. Price would punish him once again, hitting double ten to go in front 2-1.

The crucial moment came in the fourth leg. Bully Boy seemed in control of it, but then missed six darts to level the contest. This meant that Price could steal the leg, and did so by finding tops to break and go 3-1 in front. The Iceman would end the contest with a lovely 72 finish, as Smith missed tops yet again to break. Price took the first point for Wales with a 4-1 win, with Bully Boy just 1/10 on the outer ring.

Jonny Clayton continued the good start for Wales, although he did not start well in his singles game with Rob Cross. Cross held throw in the opening leg, and had a chance to break The Ferret’s throw in the second. However, Voltage missed two darts to do so, and Clayton hit double four to level.

Two straight holds made the score 2-2, before Clayton pounced in the fifth leg. With Cross on tops, The Ferret produced a stunning 84 shot to break the former World Champion’s throw and lead 3-2. Cross almost responded in the sixth leg, but missed double seven for a 122 shot. This allowed Clayton to find tops and win the match 4-2, giving Wales a 2-0 lead after the singles contests.

Those two wins meant the Welsh needed just one more point to win their maiden World Cup title, and took care of business at the first opportunity.

Wales had the throw at the start of the match, and did not come close to having their throw broken. They almost broke throw in the second leg, but missed bullseye to go 2-0 up. England held with a 25 shot for 1-1, but could not find any chances to break on the Welsh throw.

13 and 14 dart holds for Price and Clayton gave them a 3-2 lead, but England would force to serve it out, winning the sixth leg with a stunning 142 checkout on the bull from Cross.

Wales though, did not panic. Leaving 64 after 12, team captain Price found tops to win the match 4-3, giving Wales an unassailable 3-0 lead in the final. It’s the second time that England have reached the final, but failed to win the competition.