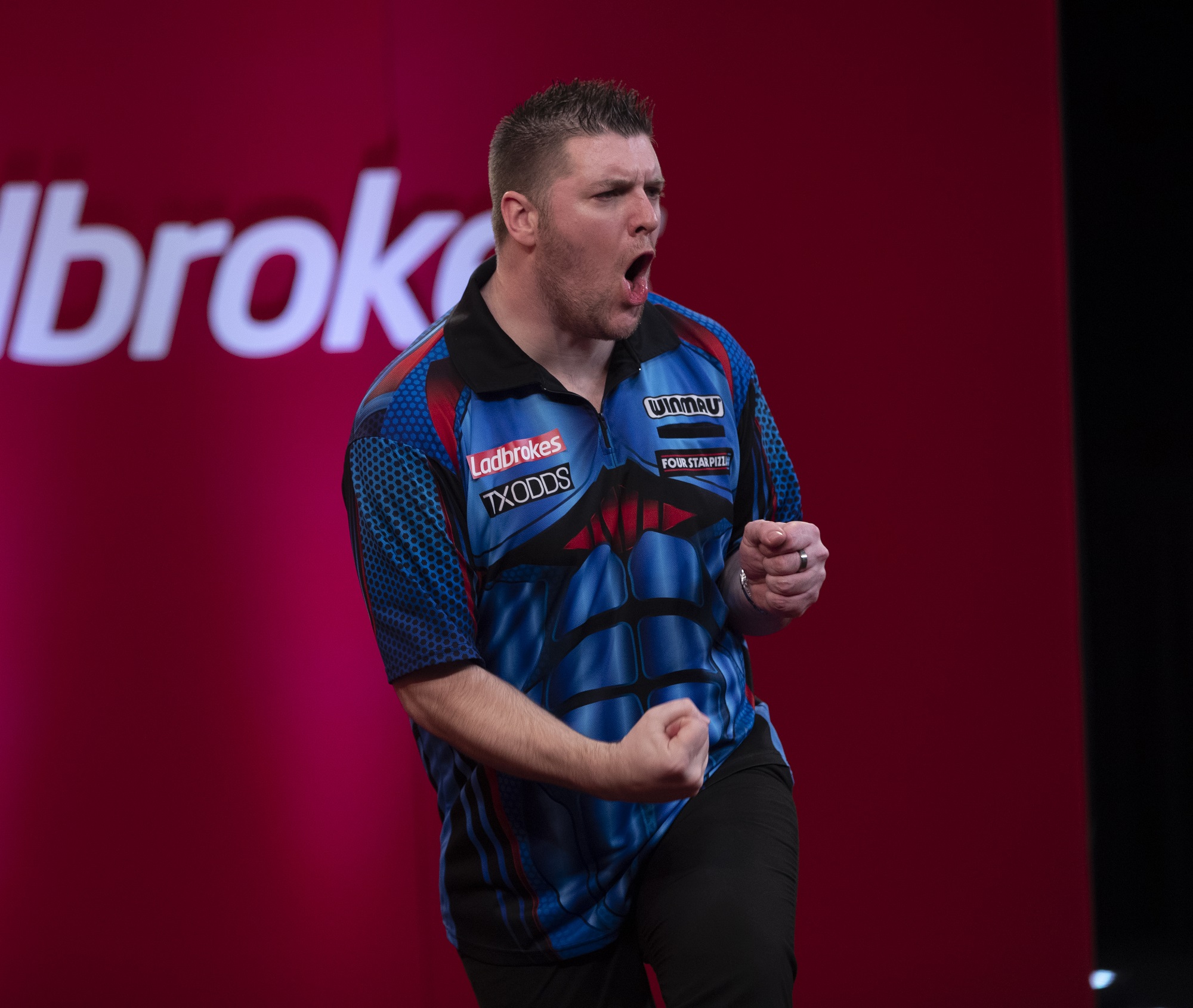 Daryl Gurney moved one point from safety on night seven of the Unibet Premier League.

Elsewhere on night seven of the Premier League:

Coming into tonight, Daryl Gurney was on two points, and had a -12 leg difference. It looked difficult for him to stay up, but a 7-2 victory over Chris Dobey has helped him massively.

Despite only averaging 86, Superchin was in control throughout. He managed to get a double break of throw to start off the match, before eventually leading 4-0.

The challenger Dobey missed 10 darts at a double in four legs, before finally finding one in the fifth leg to get on the board. However, his scoring was just not there, as he averaged only 79 for the game.

Gurney then won two more legs to make it 6-1, before Dobey hit D10 to delay the inevitable. Superchin then produced his best leg of the match, hitting a 12 darter to take his first victory of the 2020 Premier League.

Speaking after his win, Gurney told Online Darts: “I’m over the moon that I’ve still given myself a chance. Not over the moon the way I played though. I was probably pathetic in that game.

“Tomorrow night I’m going to have to be better. I need to win every game.”

Michael van Gerwen moved back to the top of the Premier League table. He defeated Rob Cross 7-2 in a repeat of last year’s final.

The game started very tentatively, with van Gerwen missed plenty of darts at a double in the early stages. This allowed Voltage to take a 2-1 break of throw by hitting D18.

Unfortunately for Cross, that was to be the last leg he would win. MvG hit back straight away with a D16 for 2-2, and then went back ahead by hitting D8 in the next leg.

The world number one took out 87 on the bullseye for 4-2, but the crucial moment of the match came in the next leg. After MvG missed two for the leg, Cross had a shot at D5 to get one of the breaks back. He missed, and MvG hit D5 himself to hold and go ahead 5-2.

The Green Machine then comfortably reeled off the last two legs for the victory. This puts MvG back at the top of the table after night seven, and severely dents Cross’ leg difference, which could be crucial in the relegation race.

van Gerwen told Online Darts after his win that: “I was dominant. My scoring power was there and that gives you confidence for the next upcoming days.

“Rob is not playing his best game at the moment. He’s struggling to find not only second or third gear, but his first gear. You can see the weakness in someone’s eyes. You can feel it.”

Anderson advances into the top four

The opening game of the night was an absolute classic between Michael Smith and Gary Anderson. Just like the Matchplay semi final, it was Anderson who came out on top.

The game started with Smith missing four darts at a double. Despite winning the opening leg, that would be the story of the evening.

Anderson missed a dart at D20 in the opening leg, and that would be the only dart on the outer ring he missed all night. He levelled up with a brilliant 124, before punishing two missed darts from Smith for the third leg with a 50 outshot.

What followed was three straight breaks of throw, and some scoring from the gods. At 3-3, both were averaging over 110. However, in the seventh leg, Smith missed five to go 4-3 up. Eventually Anderson took out D20 for a 15 dart break of throw, which also seemed to break his opponent’s heart.

Another crucial moment came two legs later. After going 5-3 down, Smith missed a bullseye for a 164 finish. Anderson then took out a 90 shot on the bull himself to go 6-3 up and get a double break. He then hit D20 in the next leg to win the match 7-3.

The game saw Smith average 107 and hit 7 maximums, while Anderson hit 109 with 3 180s. However, Smith hit just 3/16 on the outer ring, while Anderson was 7/8 on his doubles. This result saw Anderson climb into the top four, at the expense of Smith, who now sits sixth.

Speaking after his win, Anderson told Online Darts: “I got here around 3, half 3, and I felt great from the word go. I was practicing with Rob Cross, doing scores and checkouts, and I was hitting everything. The darts feel right.”

In the final game of night seven of the Premier League, Peter Wright and Glen Durrant drew 6-6.

Duzza got a break of throw with a magnificent 101 checkout in the first leg, and managed to take a 3-1 lead in the early stages. Snakebite managed to fight back though, and won three straight legs, including hitting a 170 Big Fish checkout, to take a 4-3 lead.

Durrant missed darts for the seventh leg though, and despite levelling up at 4-4, missed more darts in the 10th leg to give Wright a 6-4 lead. Duzza managed to break back in the 11th leg though, leaving Snakebite 6-5 up heading into the final leg.

The World Champion was left on 57 for the match, but strayed into the D17 rather than the single 17. This left 23 rather than 40, and Wright miscounted to leave 3. Duzza, after missing three for the draw in his previous visit, eventually found D10 to take another point in 2020 campaign. This leaves Durrant second, behind Michael van Gerwen on leg difference, while Peter Wright is fifth, also outside the playoff places on leg difference.

Afterwards, Durrant told Online Darts: “My first reflection at the end of the game is that it wasn’t a good point. I felt I was in charge of the match.

“Would I have taken 6 each before the game? Maybe. I’m glad I’m up and running.”

By contrast, Wright was happy with a point when he spoke to us. He said: “I think it’s a good point, because Glen has been top for a while.

To get a point off Glen is pretty good with the way he’s playing.”

Nathan Aspinall kept in the Play-Off places on night seven of the Premier League. He defeated Gerwyn Price 7-4.

Price got the first break of throw to go 2-1 ahead, hitting D8 for a 14 darter. He then went 3-1 up, before he started to miss darts at double.

Aspinall would punish these misses en route to winning five straight legs. The crucial break came in the eighth leg. Price was ahead in the leg, and missed a bull for an 81 finish. With Aspinall left on 40, The Iceman missed two more shots at D12. This lead to The Asp pinging D20 for a 5-3 lead.

Aspinall eventually went 6-3 ahead, after both players missed darts to take the ninth leg. Despite a 12 dart hold from Price in the 10th to make it 6-4, The Asp comfortably won the 11th leg, pinging a 108 outshot for the match. The former UK Open winner now sits in third place, while Price is in seventh, just one point clear of the relegation place.

A delighted Aspinall spoke to Online Darts after the game. He said: “The Matchplay was disappointing. I struggled with the new set up.

“I’ve gone away, I’ve put the hours in. Okay, it wasn’t Nathan’s A-game, but I played a hell of a lot better than I have been playing.”

We’ll also produce the Premier League Daily. This round up show will feature reaction, news and debate every day of the tournament. It will be available the morning after play on our YouTube, and you can listen via: