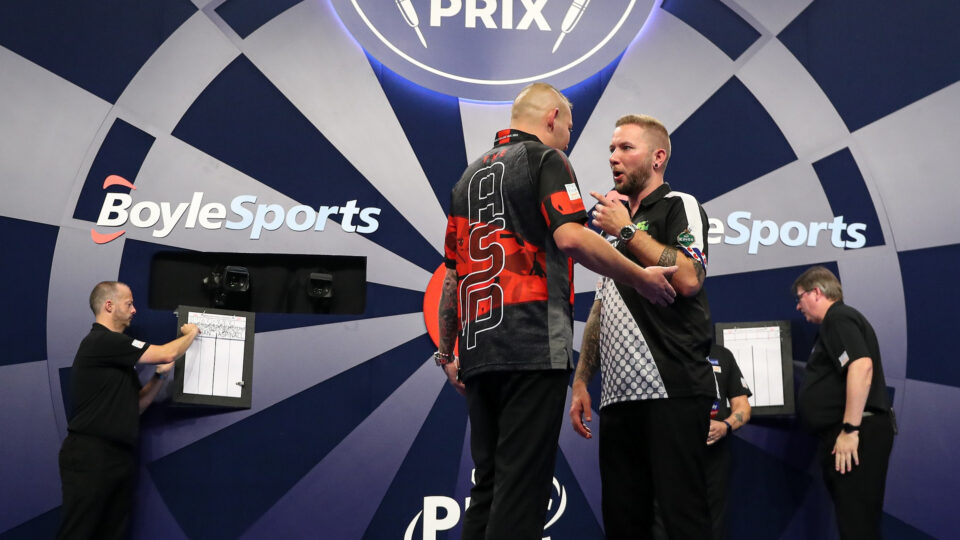 Nathan Aspinall defeated Danny Noppert 3-2 in the World Grand Prix in Leicester in a game hampered by crowd disturbances, as ‘The Asp’ recovered from two sets down to win.

During the final set, Aspinall was disturbed more than once by the crowd, and he had previously given them the finger to shut up.

As the final leg of the match heated to boiling point,  looks and words were exchanged between the pair

“Absolutely buzzing, back-to-back TV Quarter-Finals. What an absolutely gruelling game that was, from 2-0 down, it was a fantastic comeback. I’m so proud of myself with how I played under pressure considering early on in the game when the pressure was on me, I was missing which was a concern.”

“I’ve got the adrenaline going, the old fire in the belly but wow I was pumped up in that game.”

“It was a small crowd so you hear a lot of things, throughout the match when Danny was starting, there was a few whistles a few boos. Whether the camera picked it up, I was trying to hush the crowd but likewise when I was doing it, they were booing and whistling.”

“I think what it was is I obviously pulled it back and the adrenaline’s pumping and when I was 2-1 down and about to throw, there was a table all night that was supporting Danny and they have their right to support who they want and it got to the point where I had enough I was like please shut up.”

“Danny had it earlier in the game, I shouldn’t have reacted the way I did but you know I can’t take that back but Danny wasn’t happy with how I reacted but he’d seen his bum at the end that’s all I can say on that matter. He shook my hand at the end of the game which I didn’t think he would, he’s been a big man there. He’s not going to be happy with that defeat.”