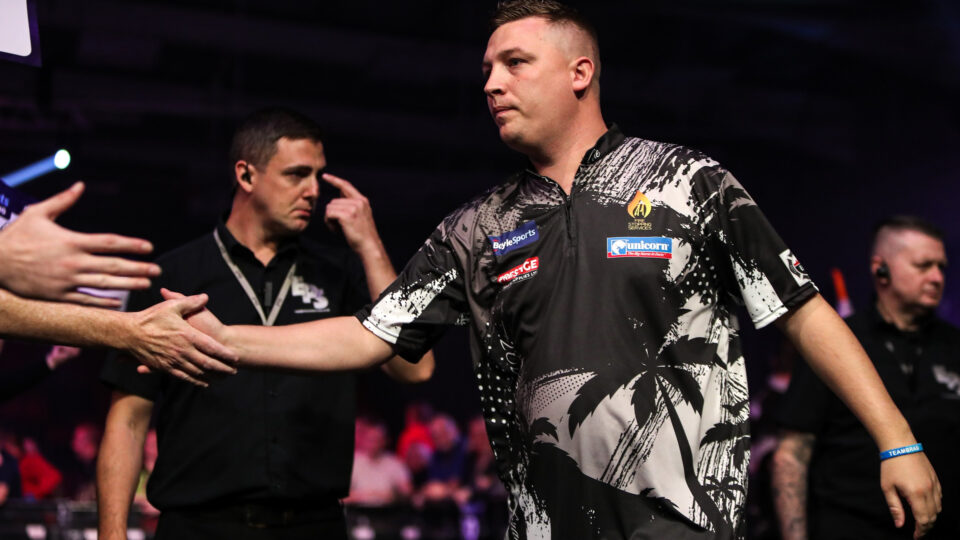 The Boylesports World Grand Prix has reached the business end of the quarter-finals, with the big 3 all in action

It will be very interesting to see the crowd’s reaction after Aspinall’s red mist last night. He takes on a man making his TV quarter-final debut.

Both men have been clearly better than their opponents in both rounds but have been dragged into a match. So it’s likely that we’ll have a close one today as they have not been putting opponents to the sword.

These two have never played each other before,  but it should be a quality affair.

Halfway through his match against Cullen, Gerwyn Price looked like he had almost given up. But he roared back and won 6 legs on the spin like the champion he is.

His opponent, Madars Razma, played brilliantly against Daryl Gurney and barely made any mistakes. He is still a massive underdog against a man who can turn is form on in a instance.

Madars has a decent record against the Iceman though, winning 4 of their 10 matches. If they both play like they did in the last 16, the Latvian may squeeze through and cause a shock.

We have a repeat of the Matchplay quarter-final this year, with Dimitri taking on the man who housed him during the pandemic.

Dimitri has been tested twice against Chisnall and Clayton but has held his nerve on both occasions without showing any weakness. Peter had a huge wobble against Ratajski but similarly to Price, roared back with 6 legs on the spin to show his true class.

Peter’s record against Dimitri is amazing, 12 wins and 3 losses. However, the most recent one on TV went to van den Bergh and Snakebite will be out of revenge today.

Van Gerwen may be strolling to a third major this year without having to leave second gear for most of it.

He walked past Gary Anderson and despite the tight scoreline, he completely outplayed Bunting as well. Dobey really upped his game against Adrian Lewis where he averaged 50 in the first set. He battled through and set up this huge clash for him.

This is where it gets brutal for Dobey though. Their record read 10 wins for Michael van Gerwen and 0 for Hollywood. And that includes a semi-final in 2019 in which the Dutchman whitewashed Dobey.