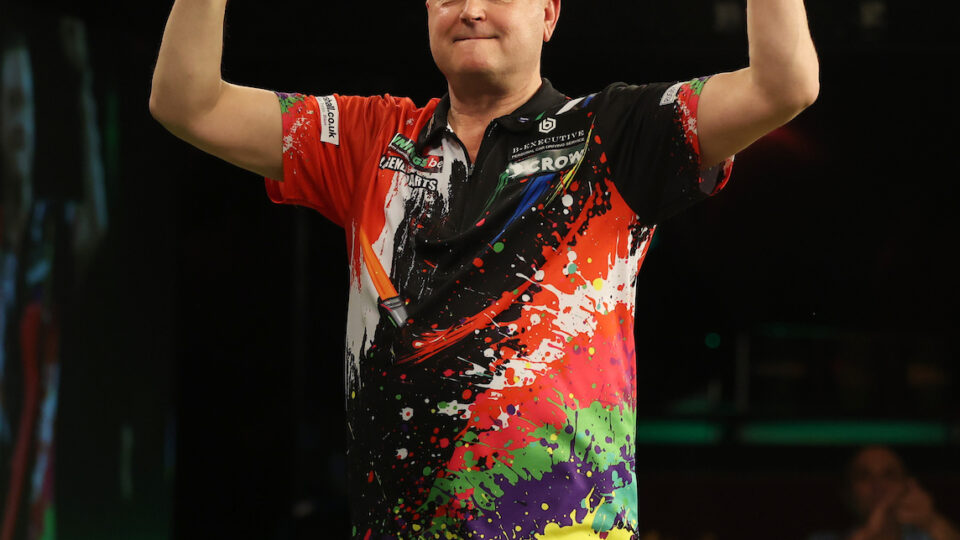 Also on day three we saw;

The Artist was going into this game knowing he had only beat Phil Taylor once in 32 attempts. After the crowd gave Taylor a great reception, Kevin Painter responded on the dart board and won the first set 3-1.

After the break it looked like the game was all over when Kevin went 2-0 up. Taylor didn’t give up the fight and fired in a 119 on his way to levelling up the scores.

Painter made sure in the next leg and secured a famous win.

Martin Adams defeats Larry Butler 3-1 to book his place in the last four.

Larry Butler got the first set on the board after winning it to nil. After back to back breaks in set five, Martin Adams held in the last leg to level up the game.

The turn of a Wolfie whitewash in the third as he took all three to move one away from victory.

Larry Butler played two games on Saturday after defeating Keith Deller in the fourth game on Saturday afternoon. Bald Eagle had to be at his best with Deller fighting back twice to level the game, however, Butler prevailed and booked his place in the last eight.

Terry Jenkins was the first name into the last four, after defeating John Walton 3-1 in the first game of Saturday evening. Terry Jenkins started the stronger and won the first set with no response. Walton then responded with a 3-1 with of his own.

Prior to his win over John Walton, Terry Jenkins got the better of Lisa Ashton in the afternoon session with a 3-1 over the Lancashire Rose. Jenkins came flying out the blocks and and won all six legs going into the break. Ashton responded winning the third set in the last leg, before Jenkins outscored Ashton to win 3-1.

John Boy had qualified for the Quarter Finals first game on Saturday when he defeated John Part 3-1. Darth Maple struggled early on and won a set after the break, but John Walton looked in control throughout and secured the win in the fourth with a 3-0 set.

Thornton into the Last four

Rob Thornton eased into the last four with a 3-0 win over Dave Prins. A slow start from both players saw a 75 average a piece however, Thornton won the set 3-1.

Thornton was sensational in set two and averaged 112.73 to demolish Dave Prins and win the set 3-0. Set three saw Prins give up more of a fight, however Thornton fired in a 12 darter to win the set.

Dave Prins did have some joy on the stage on Saturday afternoon, defeating John Lowe 3-0. Three times World Champion Lowe, couldn’t find the levels we saw when he lifted the trophy back in the 70’s and 80’s, however the Circus Tavern gave him an incredible reception pre and post game.