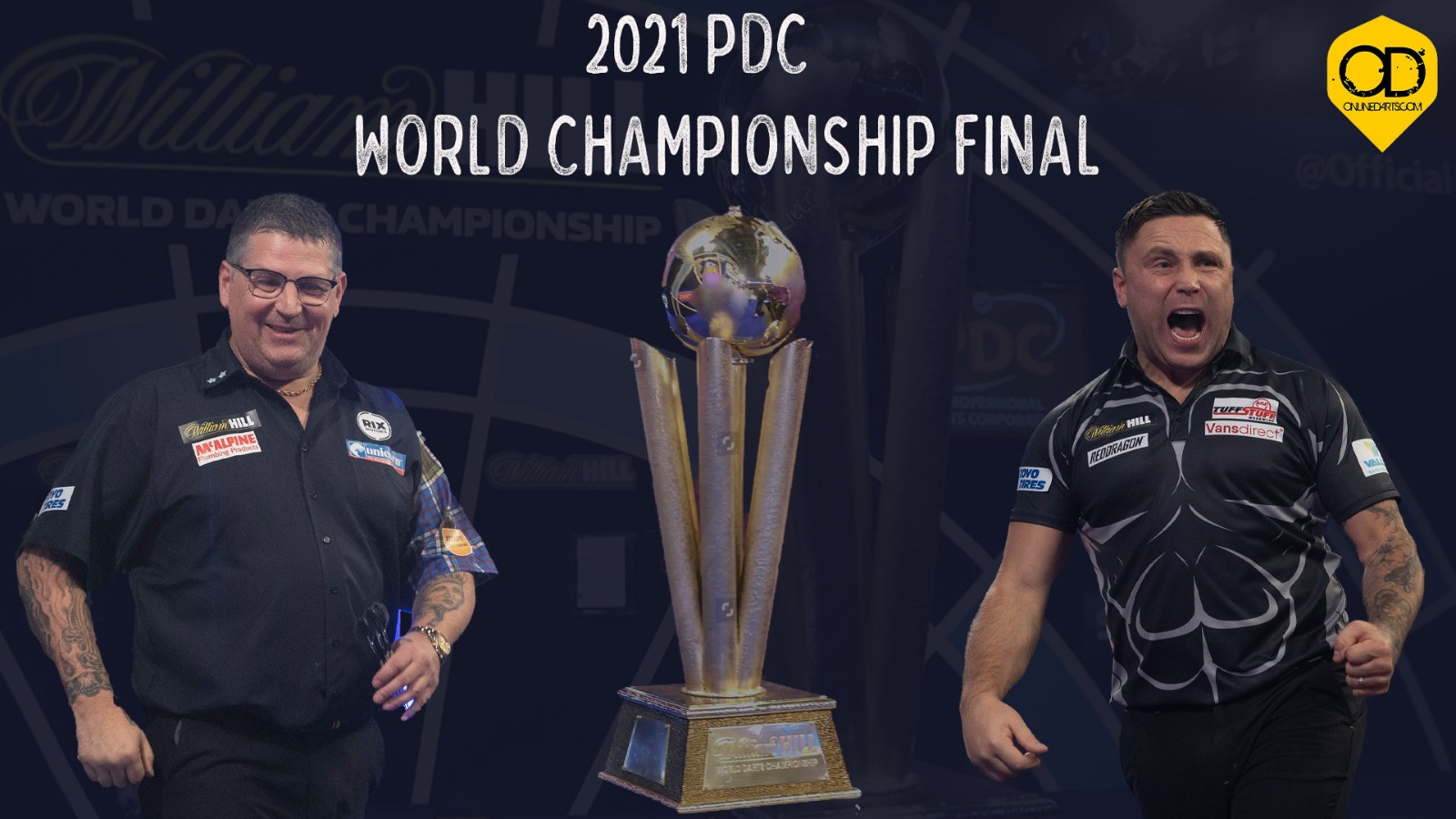 Gerwyn Price and Gary Anderson will meet in the 2021 World Darts Championship Final.

Price came through an epic semi final against Stephen Bunting 6-4 to reach the showpiece occasion for the first time. Anderson saw off Chisnall 6-3 in the other semi final to reach his fifth final in 11 years.

It will be the first TV final the pair have met in since the infamous 2018 Grand Slam of Darts Final, when Price picked up his first ever televised major title.

Price prevails against Bunting in classic

The first semi final between Bunting and Price was arguably the best since Rob Cross and Michael van Gerwen’s epic duel in 2018. The game featured 13 checkouts of 100+, a new record for any game in the PDC World Championship.

The first two ton plus checkouts came in the first two legs of the match, before two holds forced a decider, where The Iceman found double 18 to take the first set and go in front. Price went 2-0 up in the second set, and was left on tops for a 2-0 lead. However, an 82 finish from Bunting changed the set, as he reeled off three straight legs to level the contest at 1-1.

The Bullet then continued to hit key outshots at crucial times. A hold and a break from each in the third set forced another deciding leg, where Bunting hit a 76 outshot to go ahead 2-1. He then followed it up with a 136 outshot to start the fourth and despite a 131 from Price in response, won two straight legs to extend his advantage to 3-1. At this point, he was 11/15 on checkouts.

However, Bunting missed crucial darts at double in the first and third legs of the fifth. This allowed Price to hold, before the Welshman broke in 14 darts to get his second set on the board. The Welshman levelled the match in the sixth, hitting double 10 for a 100 outshot, and went 2-0 up in the seventh. Once again though, a big finish from The Bullet changed the match. After Price missed tops for the set, he piled in an astonishing 148 checkout, before holding to force a decider. Once again, the Welshman missed a set dart, and once again Bunting punished him, firing in a magical 118 checkout to steal the seventh and go 4-3 ahead.

Bunting went ahead in the eighth, but 37 darts later, Price had levelled the match once more at 4-4. The Welshman then found a 112 outshot to break the ton plus checkout record, before winning the next two legs to whitewash the ninth set and lead for the first time since set one. The match finally turned in the third leg of the tenth, where The Iceman broke The Bullet’s throw to go 2-1 up. Price then found tops for a 13 dart hold, to win 6-4 and bring the curtain down on an utter classic of a contest. It’s the first time that a Welshman has ever made a PDC World Darts Championship Final.

Anderson advances after defeat of Chizzy

Anderson, a two time winner of the Sid Waddell Trophy, saw off Chisnall with an average of 100.03. He hit 13 maximums in the contest, winning the last six legs to seal a spot in the showpiece game.

Both players looked nervous during a tight first set. However, with three holds of throw saw The Flying Scotsman take a 1-0 lead. The nerves continued to show in the second set, and roles reversed, as three holds from Chisnall levelled the contest.

Once again, a set went to the deciding leg and Chisnall left 32 after 12. However, The Flying Scotsman found an 84 shot to hold and go 2-1 ahead. That seemed to spark the two time World Champion, breaking in 15 darts at the start of the fourth. Two more holds gave him the fourth, and moved him halfway towards the final.

Chisnall would not go away easily though. Both players broke in the first two legs of the fifth, before a 124 checkout on the bull with Anderson saw Chizzy go back in front. the St Helens man then found tops in the next leg to cut the gap to 3-2. The sixth set also went to a deciding leg, where Chisnall bust his score on 84. Anderson, who had missed double 11 for a 124 in the previous visit, cleaned up the 11 remaining to go two sets clear once more.

The seventh set saw Chisnall go 2-0 up, before an excellent 116 checkout kept Anderson in However, Chisnall held on tops, after The Flying Scotsman missed two darts to force a decider, to cut the deficit once more to 4-3.

However, Anderson would finish off the match in style to book his place in the final. A 78 outshot, while Chisnall was on tops, saw him break the throw at the start of the eighth, before holding to go 2-0 up. Then, after both players missed multiple darts for the third leg, he found double five to take the set 3-0 and go within one of the match. That finally seemed to finish off Chizzy, as The Flying Scotsman wrapped up the ninth set in just 41 darts, to seal the 6-3 win and make his first final since 2017, and his fifth in 11 years.

How can I follow the World Darts Championship Final?

The World Darts Championship Final will be live on Sky Sports in the UK. You can also watch it outside the UK via the PDC’s broadcast partners, such as RTL or DAZN.

We’ll have you covered here at Online Darts, with a live blog of the final for you, so you don’t miss a moment even if you can’t watch live.

We’ll also have interviews with the winner and the runner up. Head over to our YouTube channel and hit subscribe so you don’t miss a video.

Follow all the drama of the World Darts Championship Final with us at Online Darts.