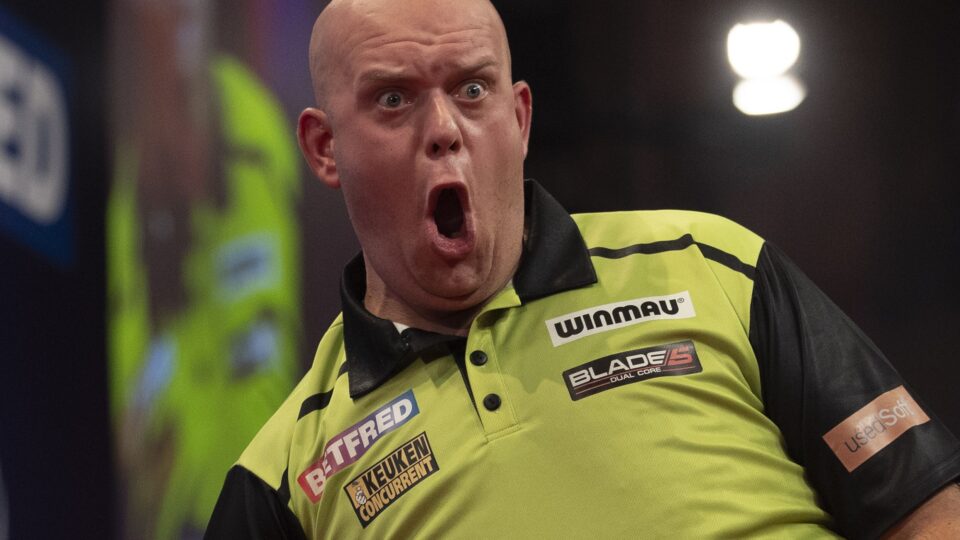 Michael van Gerwen fought back to make the second round of the Betfred World Matchplay.

Down 6-4 to debutant Damon Heta, The Green Machine won six of the next seven legs to take a 10-7 victory. It means he makes the second round of this tournament for the third straight year, and will play Ian White in round two, after Diamond defeated Daryl Gurney by the same scoreline.

Elsewhere on day three of the Betfred World Matchplay, Gary Anderson won 10- against Stephen Bunting to make the last 16, setting up a meeting with Nathan Aspinall, who came through Mervyn King 10-6.

Van Gerwen fights back to cool The Heat

On the night a capacity crowd returned to the Winter Gardens, Van Gerwen had to come through a tough test in hot conditions.

After three holds, MvG found the first break in the fourth leg. Hitting a 160 to set up 20, he hit double 10 to move 3-1 in front. However, he then missed the bull in the next leg for a 132, allowing Heta to clean up 52 and break straight back, trailing 3-2 at the first interval.

The Green Machine broke once more to go 4-2 ahead, before Heta produced some excellent darts. He won three straight legs with the last dart in hand, as Van Gerwen missed chances to take two of the legs, to take a 5-4 lead. An 84 checkout gave him his fourth leg in a row, meaning he led 6-4 at the end of the second session.

However, Van Gerwen came out of the break all guns blazing, hitting back to back 84 checkouts to level at 6-6. A 13 darter saw him regain the lead, before the big moment came in the 14th leg. The Heat missed five darts to level, and MvG punished, eventually hitting double 10 for a 17 dart break.

A 97 finish saw the Dutchman move one away, before Heta won his first leg in six to cut the gap to 9-7. After having a chance to hit a nine darter to win the match, Van Gerwen missed five darts in the 17th leg, before eventually finding double one to win the contest.

Ian White had to survive a spirited comeback from Daryl Gurney to make round two of the Betfred World Matchplay. Diamond eventually won 10-7, in a game that featured five 100+ checkouts.

Both held throw in the opening two legs, with Gurney hitting two ton plus checkouts. However, he then missed double top for a 94 outshot, allowing Diamond, who’d hit a 117 outshot in the previous leg, to find double 16 to break and take a 3-2 lead into the interval.

Three further holds followed, before White once again took advantage of missed doubles on the Gurney throw. After squandering a dart at the bull for a 161, he hit double 18 to move 6-3 ahead. A further hold gave Diamond a 7-3 advantage at the end of the second session.

White then moved two legs away by breaking in the 11th leg, but Gurney would not go down without a fight. After pinging a 116 checkout to break straight back, he hit an 80 to hold and trail by three. Diamond though missed three darts to move one away, and Superchin pinged double four to cut the gap to two.

The 15th leg saw both players squander five darts to win the leg, but eventually White hit double two to move within one of the match. He left 44 after 12 in the next leg, but Gurney found his fourth ton plus checkout of the match, hitting a 121 to cut the gap to 9-7. In the next leg though, he again missed chances to cut the gap to one. Diamond eventually capitalised, hitting double six to fall over the line.

In a rematch of the 2018 World Matchplay first round, Gary Anderson defeated Stephen Bunting 10-5 to reach the second round.

The Flying Scotsman took control of the match early on, breaking in the first leg to go 1-0 in front. Four further holds saw Anderson take a 3-2 lead into the first interval, as Bunting took advantage of missed doubles from the former Matchplay champion to stay in the contest.

After two more holds, Anderson took firm control of the match. Back to back 14 darters saw him finally move three clear, after missing lots of opportunities to do so. He then cleaned up 72 for another 14 darter, taking a 7-3 lead into the final interval.

Bunting won his first leg in five with a double 16 outshot, but it did not result in a comeback. Two more 14 dart holds either side of a Bullet for Anderson saw him move one away. He then ended the match with a 70 checkout to come through and secure the final place in the last 16.

Nathan Aspinall finally ended his wait for a win at the Betfred World Matchplay, overcoming Mervyn King, the man who beat him in 2019 on debut, 10-6.

The Asp got off to a fantastic start, breaking in the opening leg on double 16, after King missed double eight for a 136. 44 darts later, Aspinall went 4-0 ahead, not allowing The King a shot at a double. He had a chance to whitewash the session, but missed a dart at 16s. This allowed King, who’d missed a dart at the bull the previous visit, a chance to clean up 25. He took it, going into the first interval 4-1 down.

The King came out a different player in the second session, firing in back to back 15 darters to move one leg behind. Both then held once more, before King missed two chances to level up the contest heading into the second interval. The Asp, who’d missed a dart in the previous visit, took out double eight for a 6-4 lead.

It was a similar story for King over the first few legs of the next year. He held comfortably, but missed doubles to level the match up, as Aspinall maintained his two leg lead. The key moment came in the 17th leg. With his opponent on 57, The Asp pinged in a 56 checkout, to get the double break and move one away. That seemed to break King’s heart, as the former UK Open champion hit double six to complete the victory.