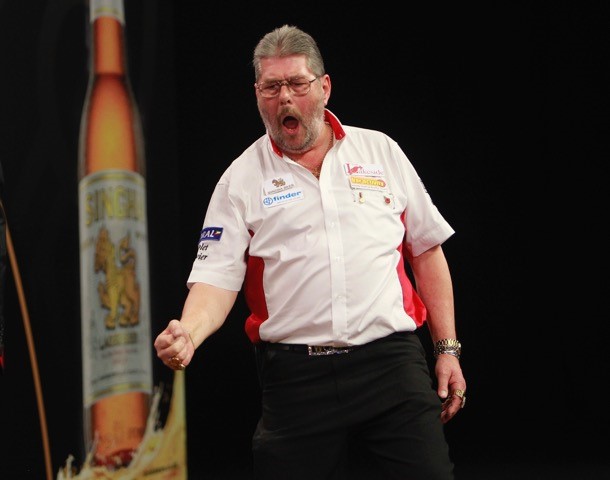 Martin Adams seals tops spot with a clean sweep of victory in the MODUS Sports Icons of Darts Live League. The three-times world champion bounced back from disappointed on Tuesday when Wolfie finished second bottom of the table, after showing so rust following a few weeks off.

Over the past three months, Adams has been sensational in the Icons league, and today he was back to his brilliant best. Today Adams opened up the Live League against Stephen Burton. Adams was 4-1 and in druse control until a fightback from Burton saw him level at 4-4. In the final leg, Adams showed his class winning in 11 darts to seal a 5-4 win, getting his first points on the board.

Adams next game saw world champions collide, in a repeat of the 2015 Lakeside final as Scott Michell was his opponent. Wolfie was in a league of his own in this clash. Running five legs on the spin to whitewash Mitchell, and sending Adams to the top of the table.

Young Irish star Keane Barry was next in line for Adams, in a mouth-watering clash before lunch. In a close game, it was a single break that proved the difference. That break went in favour of Adams, as Wolfie beat Barry by fives legs to three.

After lunch, Adams had one hand on the title having won his first three games. Up next was Mike Warburton. Yet again like we have seen so often, Adams was a class above in the big moments of the game. Winning 5-2 in a finishing masterclass from Wolfie, leaving Warburton for dead.

Adams final game of the day was against Boris Koltsov, Adams knew a win would hand him the title and a perfect five wins. In truth, Koltsov was never in the game. Adams romping to 5-1 victory, leaving him head and shoulders above the rest of the field in the Live League.

Wolfie wins another title, and will be a firm favourite heading into his next round of fixtures on Saturday. The MODUS Icons of Darts Live League will return to action tomorrow at 10.30 am. All streamed live on our Youtube channel and Dartshop.tv.