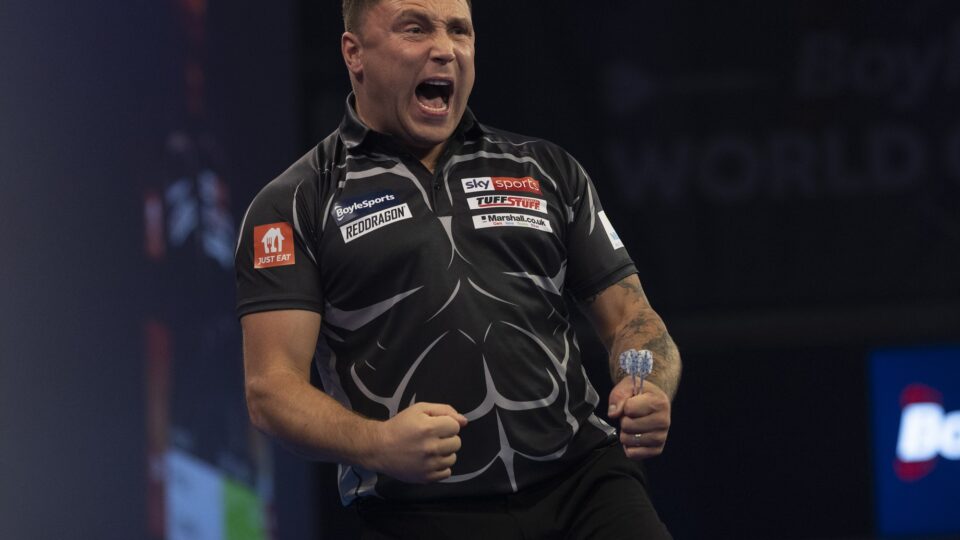 Former champions will collide in Saturday’s Betfred World Matchplay semi-finals. We will also have a new World Matchplay finalist, as Gerwyn Price takes on UK Open champion Danny Noppert on a bumper night at the Winter Gardens.

Price came through a pulsating quarter-final clash against De Sousa on Friday, surviving a spirited fightback from the former Grand Slam champion to close out a 16-14 success.

The Welshman, who battled past Martin Schindler and Dave Chisnall en route to the last eight, posted a 104.64 average to deny De Sousa – the highest of the tournament so far.

The 2021 World Champion is now back at the sport’s summit, but he’s firmly focused on lifting an eighth televised title ahead of his last four clash against Noppert.

Noppert is also featuring in his maiden World Matchplay semi-final, and his quarter-final victory over fellow Dutchman Dirk van Duijvenbode will see him break into the world’s top ten after this event.

The 31-year-old posted ton-plus averages to dispatch Northern Irish duo Brendan Dolan and Daryl Gurney earlier in the week, before averaging 106 in the last 12 legs of his clash against Van Duijvenbode.

Van Gerwen has seen off three TV title winners to reach his sixth Blackpool semi-final, following up a scrappy first round win over Adrian Lewis by dumping out Joe Cullen and Nathan Aspinall.

The Dutchman eased past Masters champion Cullen in a repeat of last month’s Premier League final, before fending off a stirring fightback from Aspinall to triumph 16-14 in a compelling contest.

Van den Bergh is featuring in his third consecutive World Matchplay semi-final, as his love affair with the tournament continues.

The Belgian relinquished just eight legs in wins over Callan Rydz and Rowby-John Rodriguez, before coming through an extraordinary quarter-final tussle against reigning champion Peter Wright.

The 28-year-old averaged 102 to dethrone the World Champion in a 30-leg epic, and now he’s bidding to join Rod Harrington, Phil Taylor and Van Gerwen in claiming multiple successes at the Winter Gardens.

For all interviews from World Matchplay Day head over to Online Darts YouTube channel.