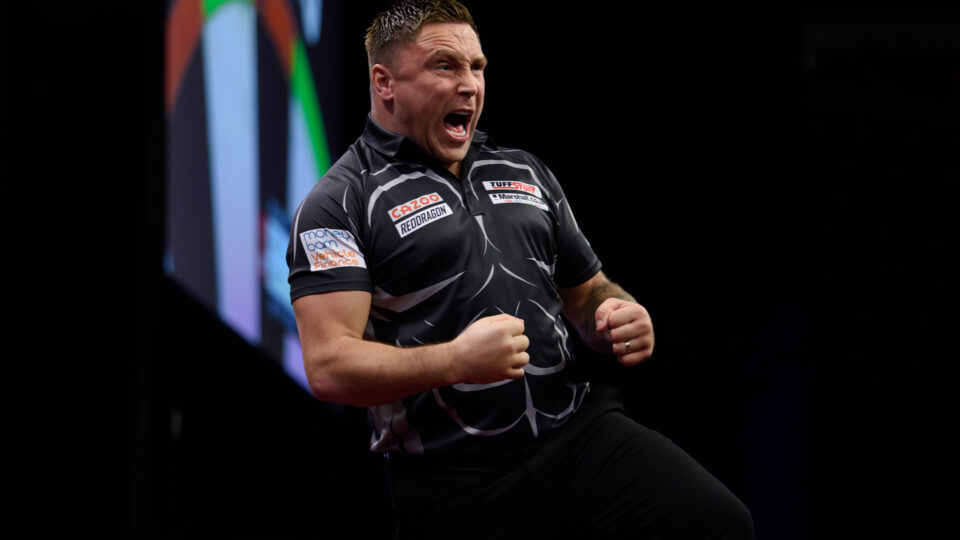 We have our Semi Final line up confirmed, and a return to World Number one for Gerywn Price.

With so much riding on the game for Iceman got broke in the first game, but levelled the game up in style with 160 checkout. The Special wanted in on the big checkout action and got a 160 checkout of his own in leg four to level things up.

Neither player was able to lead by more than one and with the scores level at 5-5, it seemed to be Jose holding on averaging 12 points less than Price who was averaging 103.

Price average continued to grow and he reeled off four of the next five legs to lead 9-6. Gerwyn Price maintained a great level and leading at 13-8 justified the performance from both players at that stage.

Jose De Sousa wasn’t willing to give up the game without a fight and went six perfect darts before getting leg darts after Price missed three.

This was the start of a run for the Special which included another leg of six perfect darts but this time Jose De Sousa finished it in style with a 100 checkout including tops tops.

Gerwyn Price won his first leg in six and followed it up with a break of throw to move one leg away.

When you thought the game was over once more and going the way of The Iceman Jose found a break and a huge celebration. We only had to wait one more leg though, as Price found a huge break to be a World Matchplay Semi Finalist for the first time and back to World Number One.

Danny Noppert got the better of Dirk van Duijvenbode 16-11 in an all-Dutch affair at the Winter Gardens.

The venue seemed cooler on Friday than it’s been all week and it was The Freeze who started the stronger with a 4-1 lead at the interval. Dirk’s one leg came in style with a 132 checkout, however, six missed darts at a double in leg five saw him go a double break behind.

Aubiergenius fought his way back with a 13-dart leg followed by two strong holds in the session to close the gap to just two.

The game started to go the way of Dirk, winning four of the next five legs to move 8-7. After 15 legs of dart,s Dirk was averaging 10 points more than Noppert, with the game on throw.

Even with such a difference in the average, it was the time for Noppert to get the lead back, first with an hold and then with a sensational 150 checkout finishing on double 15. With the rest of the session going with throw, an 87 checkout by Noppert in the 20th meant the scoreline was 11-9.

Next four legs went with throw before we saw drama in leg 25, with Noppy on 24, Dirk on 120 with darts in hand, hits treble 20 before hitting single one and allowing Noppy the chance to move three away which he takes.

This seemed to be the final nail in the coffin and a 121 checkout on the bullseye sealed the win for Danny Noppert.