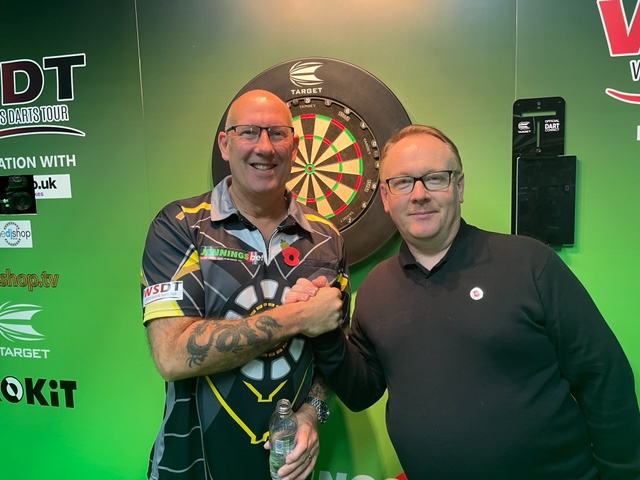 Kevin Burness has qualified for the Seniors World Championship in February.

The Ironman, came through an excellent field to book his spot at the Circus Tavern event next year. Just like Howson yesterday.

After losing in the Semi-Final yesterday to Ian Moss, Burness once again motored through the early rounds. Neil Jenkins, Wayne France and George Collumb all offered little resistance, taking just one leg from the 55 year old as he made it to the last 16.

Richard Stride was then beaten 5-2 in the last 16. Jonny Haines also fell to the same score-line in the quarters.

Mark Layton threatened to continue the recent Welsh dominance in darts, but he was unable to match the Northern Irishman’s consistency.
For every winner there must unfortunately be a player to miss out. Yesterday that was Ian Moss, today that man in Dave Prins. He too was excellent in reaching the final, but Burness broke throw at 4-3, and never looked back.

The 24 man field for the World Seniors World Darts Championship is now complete. All of them will head to Purfleet, and the Iconic Circus Tavern in February, hoping to be the first World Senior World Champion, and pick up the £30,000 top prize.

The 55 year old is off the to the @jenningsbetinfo World Seniors World Darts Championship, moving through an excellent field, on an emotional day. @TargetDarts @ModusDarts180 pic.twitter.com/0fy2s7nOqZ