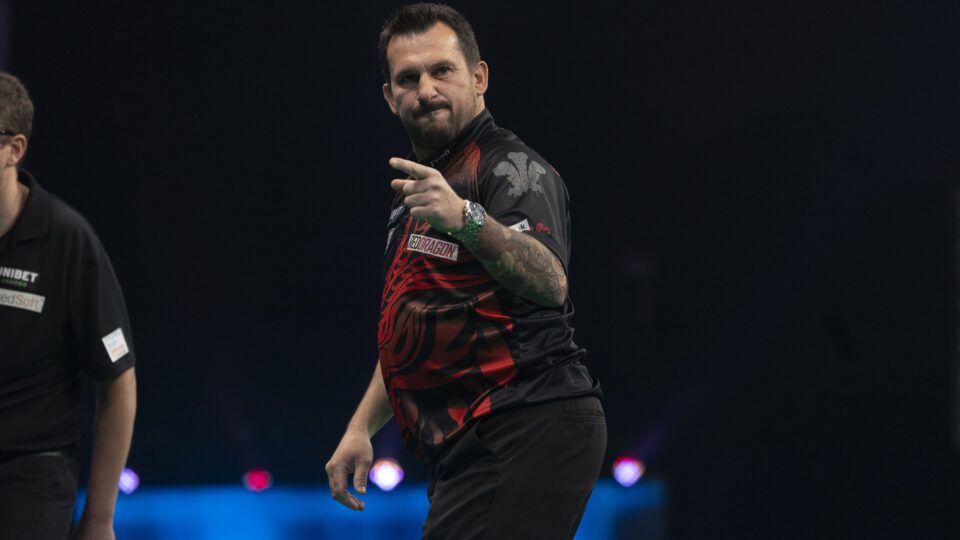 Jonny Clayton battled through to claim the final Premier League Darts Play-Off spot on the final night of the league phase.

In a tight game, The Ferret beat Dimitri Van den Bergh 8-6, which secured him the fourth spot in Finals Night.

He will face Michael van Gerwen, who topped the league for the eighth time in nine years with an 8-6 win of his own over Peter Wright.

Clayton battles through to take fourth

In a match where he only needed a draw, Jonny Clayton went into Finals Night with a win against Van den Bergh.

Van den Bergh continued to hold comfortably, but could not find anything to attack the Clayton throw. Five further holds followed, meaning The Dream Maker trailed 5-4 heading into the 10th leg. The chance he needed to take came, as The Ferret missed bull for a 124. However, The Dream Maker missed double 16 for what would have been an 88 checkout to level, and Clayton cleaned up 24 to move one leg away.

The Dream Maker made him serve it out, hitting a 68 shot on double 16 for a 6-5 game. But, Clayton would not be denied. Having missed three for the leg, he eventually hit double five, letting out a huge roar of emotion as he secured his Play-Off place.

Not content with a draw though, he went onto win the game. Van den Bergh held again on double 18, before a 13 dart hold on tops gave Clayton a perfect springboard into Finals Night, where he takes on Michael van Gerwen. For Van den Bergh, he will wonder how he missed out, picking up just five points from a possible 14 after being top on night eight.

The first leg foreshadowed what was to come. De Sousa, on 120, hit tops, tops, tops, to break and send the crowd into a frenzy inside the Marshall Arena. Aspinall however countered immediately, hitting a fantastic 152 outshot to level.

The Special One found an 11 dart leg to break once more in the third, but missed 107 to hold for a 3-1 lead. This allowed The Asp to hit double four, after missing three for the leg prior, to equalise once again.

However, Aspinall could not take advantage of four missed darts from De Sousa in the fifth leg. He missed bull for a 170 Big Fish checkout, and two for 25, as the Portuguese Man O’Scores pinged double eight to go 3-2 in front. An 11 dart hold saw him open up a 4-2 gap.

A 72 outshot from The Asp saw him cut the gap to one, but that was the last leg he would win. A 15 darter from De Sousa restored a two leg lead, before another exhibition finish, this time just tops tops, secured a double break. A second straight 15 dart hold got The Special One a point, before a ridiculous 149 checkout saw him win 8-3. Him and Aspinall lock horns in the second semi final tomorrow night.

Michael van Gerwen beat Peter Wright 8-6 to earn his third straight win of the Premier League, and it helped him to finish top of the table for the eighth time in nine years.

A 109 checkout from Wright saw him hold in the opener, after MvG missed two to break. However, The Green Machine responded instantly, pinging a 113 outshot in leg two to level. Two further holds followed, making the match 2-2.

Van Gerwen then hit a 180 and 177 in leg five to leave 44 after nine, before hitting double eight for a 12 darter. Both players missed darts to win the sixth leg, but it was Snakebite who eventually hit tops to equalise. The Green Machine again took the lead, finding a 126 to break the Wright throw again. Again though, Wright equalised, hitting double nine to make the match 4-4.

Once again, MvG found a break in the ninth, and once again, Wright responded, hitting a 12 darter to make the score 5-5. The crucial moment came in the 11th leg. Snakebite squandered four darts to take it, and MvG eventually hit double 10 to go in front. This time however, he’d hold throw in the next leg, finding a fantastic 145 checkout to move within one.

Wright held in the 13th leg to force a decider, but could not put pressure on the Van Gerwen throw in the last leg. The five time winner of this event found tops to get the job done for his second straight 8-6 victory. He wins £25,000 for finishing top of the league, and takes on Clayton tomorrow. Wright ends the competition seventh.

With both players out of contention for the Play-Offs, it looked like that both had a sense of freedom on the oche to start the match. Six straight holds, where neither really threatened each other’s throw, meant it was level at 3-3.

The Machine then got the crucial break of the match in the seventh leg. Back to back 180s saw him leave 41 after nine, and he eventually found double 10 for a 14 darter and the lead. The following leg, The Flying Scotsman left 90 after 12, and had a chance to level. However, Wade countered with a lovely 102 checkout on tops to move two clear.

Anderson would respond with a fantastic leg, leaving double eight after nine darts. He hit double two to cut the gap to one, before Wade responded with a 13 dart hold. The Machine had a chance to win the 11th leg, but missed tops for a 107 outshot. Anderson then hit double five to trail 6-5.

The 12th leg saw both miss huge checkouts to win it. Wade missed double 11 for a 124, while Anderson could not hit double 12 for a 141. In the end, Wade guaranteed a point thanks to a double four shot. A comfortable hold from Anderson forced it to a decider, where he missed bullseye for an 86 shot and a draw. Wade came back for 94, and hit double eight to secure the 8-6 victory. It means The Machine finishes sixth, while Anderson ends his campaign eighth. 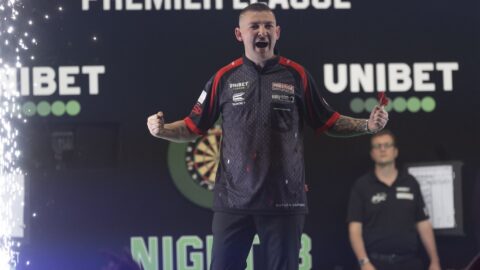