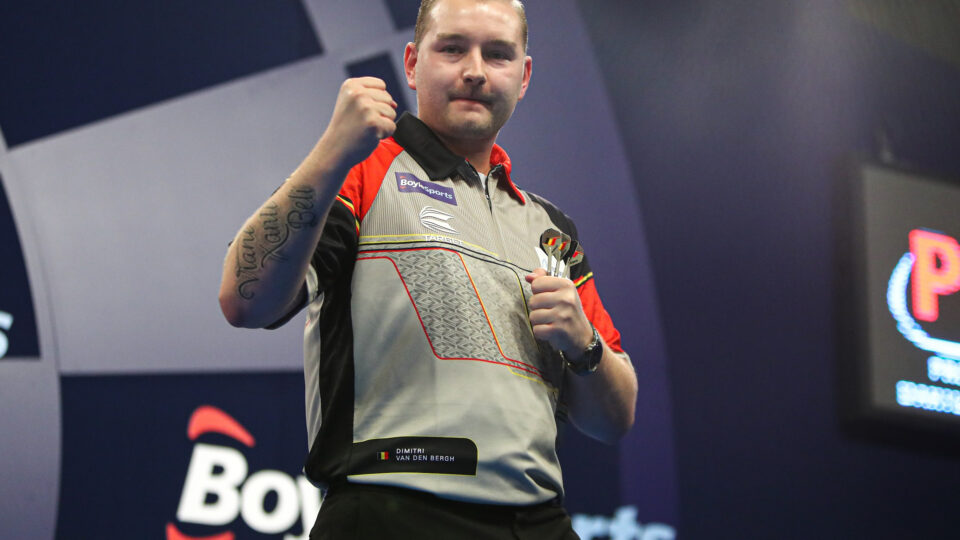 Dimitri van den Bergh looks ahead to his rematch with Peter Wright  “I’m not scared of anybody my darts do the talking.“

One of the quarterfinals of the BoyleSports World Grand Prix is a repeat of the World Matchplay at the same stage. World Champion Peter Wright will again take on Dimitri van den Bergh.

The Matchplay tie ended in a frosty outcome, the pair have since put that behind them, but van den Bergh insists he’s not scared of anyone and will let his darts do the talking on Friday night.

“It doesn’t really matter as me and Peter will go up on that stage and we’ll be going the best as we can, as good as we can as anybody. We’re not focused on who’s in front of us, we’re focused on the game. I’ve got an extra day off then it’s back to business, me, my game and self belief. Give it 100%.”

“I’m only playing the best of the best, I’m not focused on who’s ahead of me, I’m not scared of anybody my darts do the talking.”

Van den Bergh recently had a health scare at a Euro Tour event,  but all that seems to be on the right track now.

“Anybody who can sleep in their own bed before playing a tournament is very much happy because they know they’re going to get their sleep so I’m very happy.”

“It was a scare 100% but right now I’m fine. I had my checkups, my blood came back. My doctor said to myself that it’s a funny request but you’ve got to get a little bit more self belief in yourself because apparently everything in my body is fine so I think it’s in the past now.”