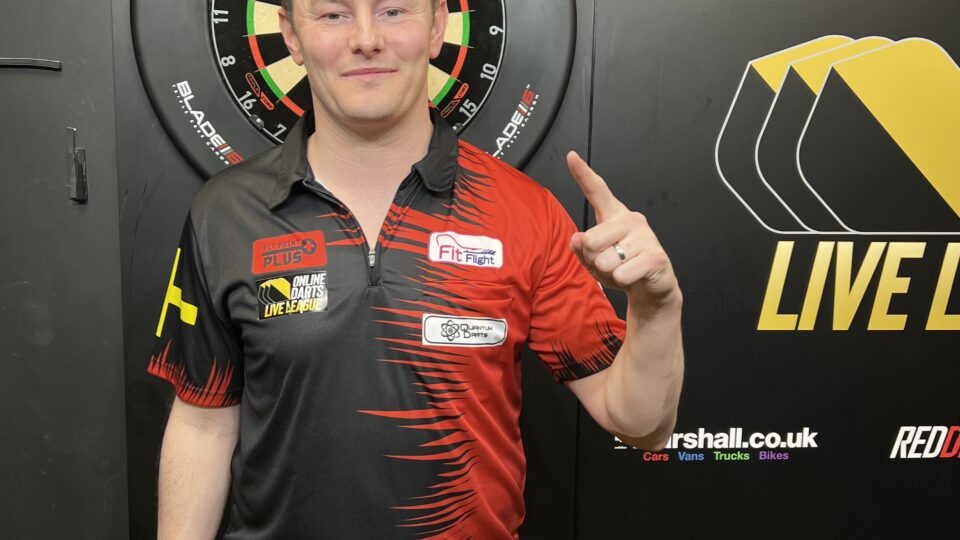 Mike Gillet upset the odds in the second week of phase one of the Online Darts Live League as the Welshman booked his place in Champions Week.

It was the best possible start for Live League debutant Simon Stevenson as he won 7 out of 10 games and secured a spot at finals night by beating Irish man, Teehan 4-1. Then it was a straight shootout between Robert Rickwood after finishing on the same points as league leader Steveson after day one and the King of the Castle Jared Cole.

Rickwood takes out double eight and manages to do enough and he comes second in the group and sees Cole join Group C in the morning session. After only winning one game in the group as it sees Frenchman Thibault Tricole finish bottom of the group.

Stevesons qualifies for finals night after winning the group.

After a very strong start to the group, it sees Tricole and Cole both topped the table, with the youngster Nathan Girvan in third place on 6 points. After only winning one game all throughout group A and finishing last, it sees Tricole win 7 out of his 10 games to book himself a spot at Finals Night.

It was then a battle for second position and after starting Day 2 off in the best possible way it sees Scott Baker steal second position even though Cole won the last match of the group 4-1 against Irish man Teehan, it wasn’t enough as it sees Baker take second spot on leg difference.

Youngster Girvan makes 5 for 5 in the group and finishes on a commanding 10 points. It wasn’t the dream debut for Carl Hamilton as he lost 6 out of his ten games to take fifth spot in the group. Leaves Former tour card holder Teehan finishes bottom on 4 points.

Thibault Tricole and Scott Baker qualify for finals night after a thrilling ending to the group action.

After only winning 1 out of his 4 games on night one of the groups sees Welshmen Nick Kenny finish in third after having a very strong performance throughout night two. It was a masterclass from Edgar as he went 4 for 4 on night two and against Welshmen Kenny, he went 100% on his doubles and saw him top the group.

After finishing the group on 10 points it sees Mike Gillet take second position and book himself a spot in finals night. After Rickwoods master class of beating Edgar 4-3 taking out 120, it wasn’t enough to knock Nick Kenny out of third position and saw him finish the group in last place.

And it saw Dan Read do enough to finish in fourth on leg difference.

It was now time for finals night and Edgar only dropped 3 legs to book a spot in the semis. It was then a shootout between the Frenchman Tricole and Welshmen, and it sees Tricole knock out Kenny with a 4-1 victory to see him into the other semifinals.

It was now the final and it saw Mike Gillet beat Baker 4-2 to win the week. Both men booked a spot at champions week.