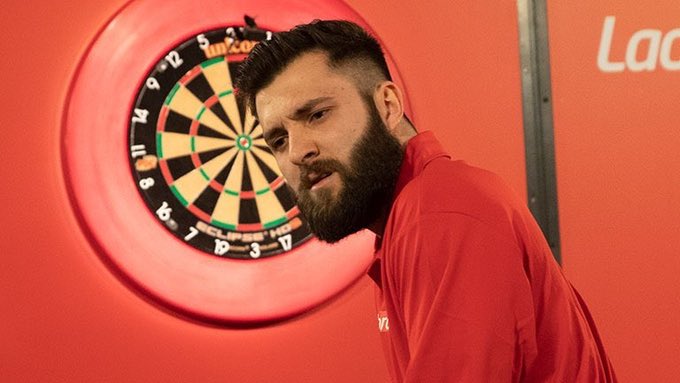 On a dramatic day of action in the MODUS Sports Icons of Darts Live League, Jason Askew claimed glory with a perfect day of darts. Askew had a 100% record winning all five of his league games on the MODUS stream. In a league consisting of Andy Jenkins, Mark Webster, Boris Koltsov, Scott Mitchell, Keelan Kay and Askew.

Askew opened up the day in the first game, against Mark Webster. Askew controlled most of the game and ran out a 5-3 winner. In his second game, Askew survived a scare. The match against the former world champion Scott Mitchell went down to the last leg shootout. With Askew getting over the line.
Game number three of his campaign was against Cornish youngster Keelan Kay. In the early stage, Kay held his own, but it was Askew who showed his strength powering to a 5-3 victory.

Sitting on three wins Jason Askews last two games were the most robust looking on paper. First of those two was against the Cosham king Andy Jenkins. The game never lived up to the billing, as Askew ran out a 5-1 winner. With both players only averaging in the late 80s. Going into his last game, Askew knew that a win would seal him victory. That last game was against the Russian Boris Koltsov, the only man who could still catch Askew in the table.

You would think that Askew may have felt the pressure in his shoulders, knowing what was on the line. But no, Askew was majestic. A 5-1 win with a 103.11 average was far too good for Koltsov, who averaged 101 himself, which means that Askew would win his second title in 3 days in the MODUS Icons of Darts Live League.

Askew will return to action this Saturday, live from 10.30 am.