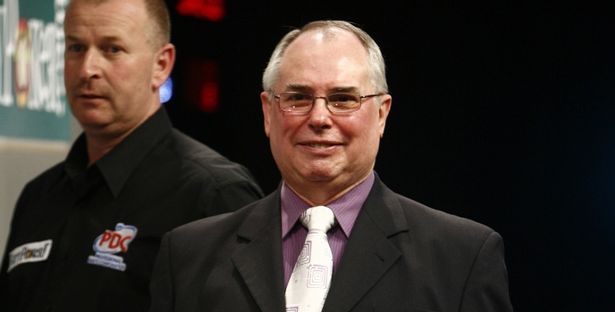 Hall Of Fame Darts Referee Bruce Spendley has passed away at the age of 80.

For more than 30 years, Spendley’s face and voice were synonymous with televised darts, having presided over some of the sport’s most memorable moments.

From 1980 to 2013, the Cleveland-based announcer called 34 World Championships throughout the BDO and PDC systems, retiring after the final between Phil Taylor and Michael van Gerwen at Alexandra Palace eight years ago.

His contribution to darts was recognised when he was inducted into the PDC Hall of Fame at the Annual Awards dinner in 2013.

“Bruce was a very popular and respected member of our staff and one of the most experienced referees ever in our sport,” said PDC Chief Executive Matt Porter.

“His distinctive voice was recognised around the world and he was held in high regard by players throughout darts.

“We send our condolences to his family and friends at this sad time.”

A minute’s applause was held in Spendley’s memory before the start of Tuesday’s Players Championship 14 in Milton Keynes.

Very sad to hear about the passing of a dear Friend and colleague Bruce Spendley thoughts and prayers go to all he leaves behind RIP pal.

Very saddened to hear Bruce has passed away, the best referee I’ve ever seen “Rolls Royce voice Bruce” thank you for being my friend. We had some great times and I will always remember these. Sleep well my friend….❤️ pic.twitter.com/tdRxOpiytq

So sad to hear of the passing of Bruce Spendley today. He was such a lovely fella and will be missed by everyone who met him or listened to him on TV. Some of my greatest moments Bruce was there calling the shots and I will be forever thankful to have shared them with him #rip

So sad to hear that Bruce Spendley one of our best referees has passed away. RIP my friend. pic.twitter.com/ogYKLVzTWU