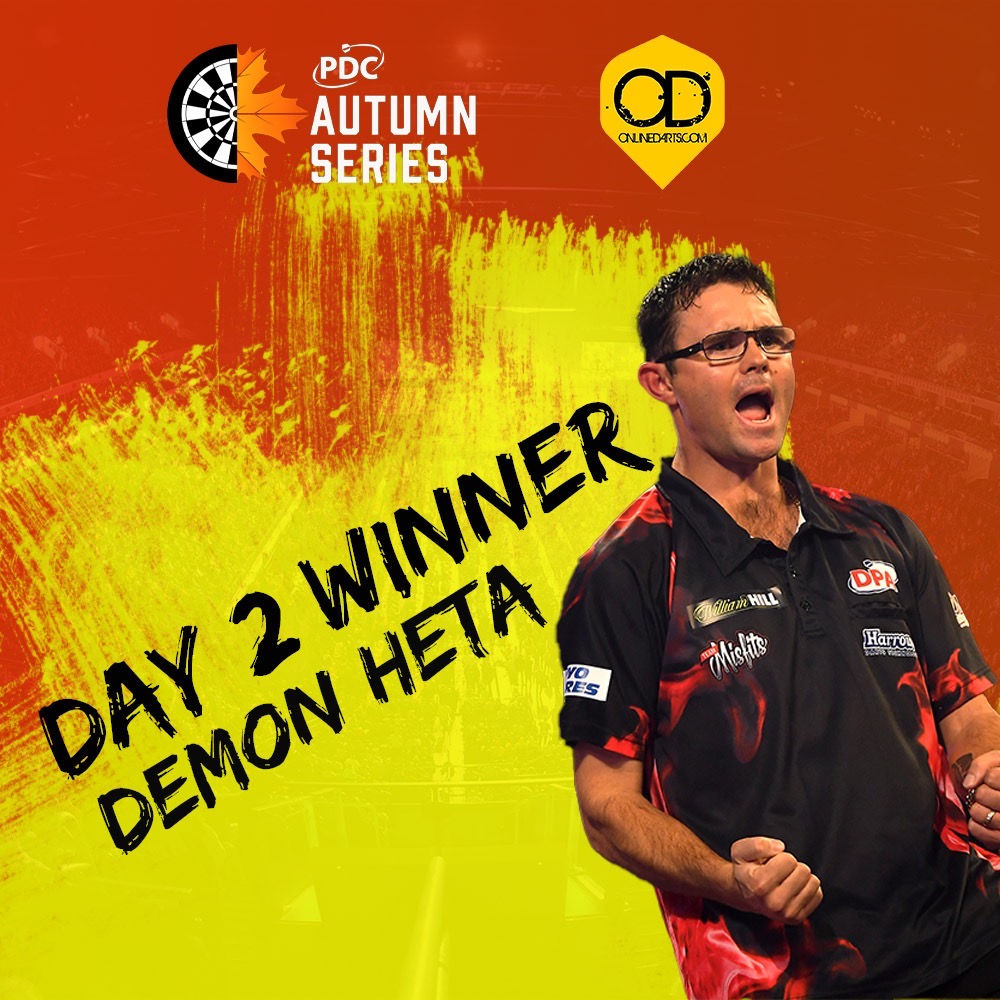 Elsewhere on day two of the Autumn Series:

Given a tough board assignment, Heta started the day by coming through a last leg decider against Scott Waites. This set up a clash against world number one Michael van Gerwen, in which he went 5-1 up, averaging over 100. van Gerwen fought back, but a spectacular 11 dart break of throw saw Heta win the match 6-4 and knockout the Green Machine.

Heta then faced World Matchplay champion Dimitri Van den Bergh, and comfortably won 6-1 to win Board 15. He then had to win another last leg shootout in the last 16, this time against Ross Smith, before producing comfortable 6-3 and 7-3 victories against Martin Schindler and Stephen Bunting respectively to win his quarter and semi final.

This set up a final against Joe Cullen, and both started brightly, each holding their throw for the first eight legs to keep the match all square at 4-4. The turning point of the match came in the ninth and then tenth leg. After missing bull for a 170 checkout, Cullen missed a further two darts for what would have been the first leg of the match. Heta then punished those misses with a D10 shot to go 5-4 up.

This gave Heta all the confidence he needed. A magical 171 in the next leg set up a 138, which he took out in four darts to get the crucial break and go 6-4 up. The Australian then held this throw, and won the match 8-4 with a magnificent 120 checkout to cap off a day he will never forget and win his maiden PDC ranking title.

It also puts him onto £14,000 in the Pro Tour Order of Merit, which sees him just £1,500 off the World Grand Prix qualification places. It also sees him all but qualify for the Players Championship Finals in November at Butlin’s Minehead.

It was a case of so near and yet so far for Joe Cullen in Germany, on a day that The Rockstar battled his way into the final.

He started the day with comfortable 6-2 and 6-3 wins against Harald Leitinger and Conan Whitehead to set up a board final against Daryl Gurney. In what would be the first of three last leg deciders for Cullen, he averaged 109.5 en route to a 6-5 win and moved into the last 16.

He then whitewashed Ricky Evans 6-0 in the next round, before averaging 103.0 to beat Gerwyn Price in a last leg shootout. The theme would continue for Cullen against Nathan Aspinall in his semi final, as he punished missed darts from Aspinall for the match to win 7-6 and go through to the final.

After missing those two darts for a 5-4 lead, it seemed to take it out of The Rockstar, and he couldn’t find the extra gear he needed to win his first title of the year. It’s not all bad news for Cullen though, as he moved past the £20,000 mark by making the final, a significant amount of money in the race to qualify for the World Grand Prix.

Stephen Bunting’s semi final run took him over the £20,000 mark, which should be enough to see him into next month’s World Grand Prix.

Chris Dobey made the last 16 to put some distance between himself and the chasing pack for Grand Prix qualification. He stays in 16th place, but is now £1,000 ahead of nearest rivals Mervyn King and Steve Beaton.

Elsewhere, Simon Whitlock ended Peter Wright’s winning streak on the Pro Tour. Snakebite was looking for three straight Pro Tour titles, but was knocked out in the last 16, ending a run of 17 straight consecutive wins on the floor. A quarter final run for the Wizard sees him stay just about in touch in the race to Coventry.

Two players who might be concerned about their form are Jeffrey De Zwaan and Dirk van Duijvenbode. Both lost in the first round and will need to find wins tomorrow to avoid being caught by the chasing pack.

How can I follow day three of the Autumn Series?

We’ll have day three, and the rest of the Autumn Series, covered at Online Darts.