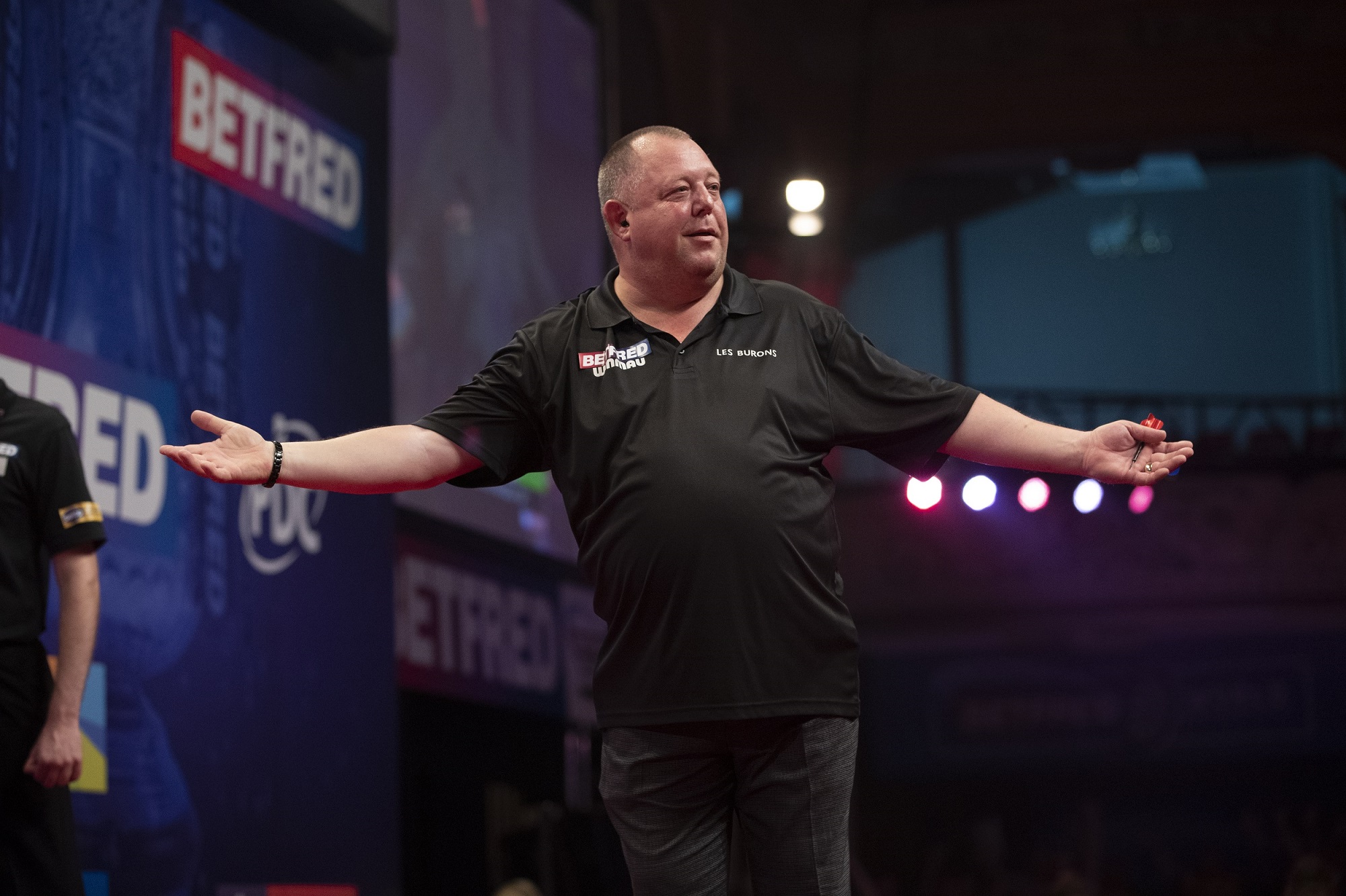 Mervyn King hit his personal best TV average to beat James Wade on the opening night of the World Series of Darts.

Mervyn King has achieved many things in darts. He is a former Winmau World Master, won numerous titles around the world, and has been a force to be reckoned with in the PDC for a number of years.
Before tonight there was one thing missing from the King CV. An appearance in the World Series of Darts. The Englishman, participating in the World Series finals by virtue of winning through last weeks qualifier, marked the occasion with a spectacular performance. Dismantling James Wade 6-0, with a 115.62 average.
Not only was this a personal best for King, but it also tops the stats sheet for the entire history of the World Series of Darts.

For a man that has done as much in the game as Mervyn King has. Not ever appearing in the World Series just didn’t sit right.
When the man from Norfolk qualified for the World Series finals, there was peace in the world. Then the draw came, and he was paired with one of the only players still competing today that can match his staying power in the upper echelons of the game. James Wade.
What happened next was an I was there moment. Mervyn King produced his highest ever TV average. The Highest average recorded in the World Series.
At an average of just 13 darts per leg, Mervyn King whitewashed the world number four, James Wade.
Legs of 15, 14, 12, 11, 12 and 14 a high checkout of 144, and 6/9 on the outer ring would have been a match for anyone tonight.

PDC Darts returned to the Netherlands in what turned out to be a great night for the partisan crowd. Of the 6 Dutch players that took to the stage tonight, 4 out of a possible 5 made it through to round two (The full 6 could not progress due to an all Dutch Clash between De Zwaan and Van Duijvenbode). Perhaps the biggest shock though came in the form of Danny Noppert being one of the two natives to miss out.

The Freeze has been in exceptional form of late, most notably reaching the Semi-Finals of the World Grand Prix. However, Noppert was powerless to stop the reigning Grand Slam of Darts Champion Jose De Sousa progressing, as the Special one piled in a top drawer performance.
The world number 7 produced a masterclass on the outer ring. hitting 6 out of 7 doubles. His only failed attempt coming in the last leg.
It was a much welcomed return to form for the Portuguese Man of Scores as he has affectionately become to be known as. But he’ll very much need the same performance tomorrow as he takes on Dimitri van den Bergh.

Jeffrey de Zwaan was the other Dutchman to fall in round one. He took on compatriot Dirk Van Duijvenbode, as the pair continued their contrasting couple of years.
It was not long ago we were talking De Zwaan up as the next contender in PDC Darts. A string of good TV performances in high profile matches meant the youngster was the man many thought was next off of the proverbial production line. At the same time, Van Duijvenbode was tour about to be off the tour.
Fast forward 2 years, and its the Aubergenius that holds all the aces, having reached his maiden PDC major final last year at the Grand Prix.
The result went to form with Van Duijvenbode running out a 6-2 victory, and setting up a clash with the man that beat him in the Grand Prix final. World Number one and World Champion, Gerwyn Price.

The Dutch Destroyer and Triple Z were both handed tough assignments following their invitations to the event. Van der Voort duelled with Nathan Aspinall, whilst Zonneveld duked it out with Dave Chisnall.
In both cases, the Englishmen were underwhelming, much to the delight of the home fans.

Elder statesman Van der Voort took care of Aspinall 6-3, whilst the young lefty in Zonneveld comfortably beat Chizzy despite averaging just 88.
The duo will need to raise their games tomorrow if they wish to progress any further though. Van der Voort meets Jonny Clayton in round 2, whilst Zonnevled faces former World Champion Gary Anderson.

Kim Huybrechts won in what had an argument to be the game of the evening. Fresh off tasting victory at Players Championship 27, Michael Smith will have entered this event in a bullish nature. However, the draw paired him with the fiery Belgium, Huybrechts, who has spent the last 6 months re-gathering the form that saw him reach the top 16.
The Hurricane found a break of throw before the commercial interval, and BullyBoy was never able to reverse the damage done in the final leg of the first mini-session.

Krzysztof Ratajski has the un-enviable task of facing Fallon Sherrock on a PDC stage tomorrow. He beat Gabriel Clemens 6-3 to set up a meeting with the Queen of the Palace, who will be entering in round 2 as the number 2 seed following her run to the final of the Nordic Darts Masters.

World Cup winner, and all around loveable figure John Henderson was unable to re-produce his Team Scotland form when playing just for himself tonight. The Highlander mustered a 90 average in a 6-2 loss to Maik Kuivenhoven, who, despite good showings across multiple pro tour in the last 18 months, is still searching for a big result in front of an international audience. Perhaps that will come tomorrow against fellow countryman Michael Van Gerwen.