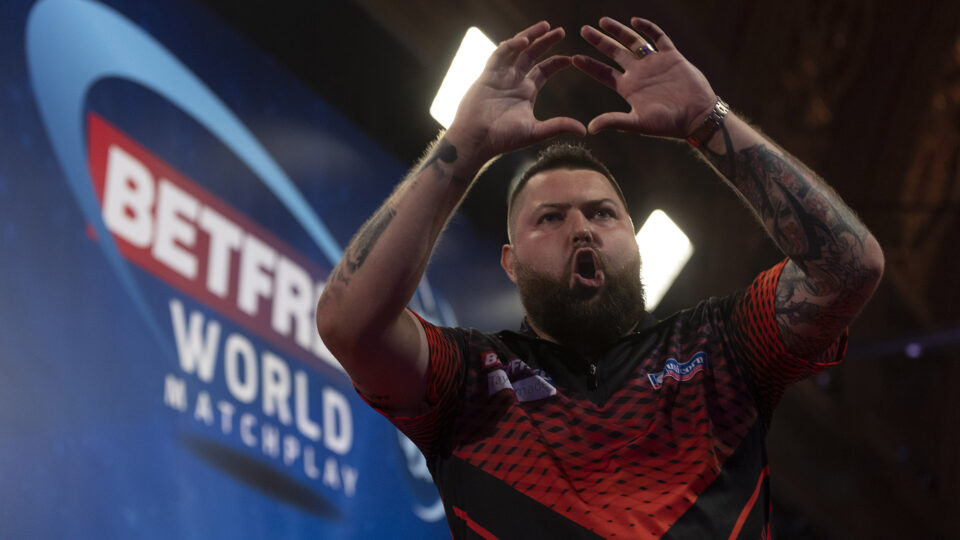 Bully Boy Victorious on final day of the Super Series.

Michael Smith came from 4-0 behind to win eight of the last 10 legs.

Also on day four we saw,

Bully Boy Victorious on final day of the Super Series

The final looked one sided as Ross Smith won the first four legs. Michael Smith didn’t let that knock his confidence, and it was his turn to win four legs on the bounce. Ross did stop the rot in leg nine which was then followed by a hold for Michael to make 5-5.

For the first time in this final Bully Boy took the lead with a break of throw and Michael take a 6-5 lead. We all know a break is only a break if you hold and after Ross misses three darts for the leg Michael moved just one away.

Bully Boy eased off the gas in leg 13 and certainly put his foot back on it in leg 14. Michael Smith left 81 after nine darts and won the title in style finishing on the bull.

Smith’s run to the final

Michael Smith started the day with an 80 average as he defeated Michael Rasztovits in the last leg. That wasn’t the only last leg decider for Bully Boy who defeat Ricky Evans 6-5 after wins against Maik Kuivenhoven and Joe Murnan.

Bully Boy eased to victories in the Quarter-Finals and Semi-finals beating Kim Huybrechts 6-3 and Florian Hempel 7-3 to set up a Smith Derby final.

What else happened on the final day of the PDC Super Series?

We saw some big names drop early on a day labelled Seedageddon In the first round we lost Krzysztof Ratajski, Dimitri Van den Bergh, James Wade and Dave Chisnall

Some big names avoided the first round exit however, the second round saw more big names drop with Luke Humphries, Danny Noppert, Peter Wright and Number One seed Joe Cullen all depart.

For the second day Madars Razma fire in a perfect leg, this time it was in a deciding leg to defeat Luke Humphries but his run was ended by Ricky Evans in the last 32.

View the full results on the final day of the PDC Super Series.

Super Series 7 is finished but we will back tomorrow for the Women’s Series 10am BST.
Keep up to date with all the action via our YouTube channel Live Stream.