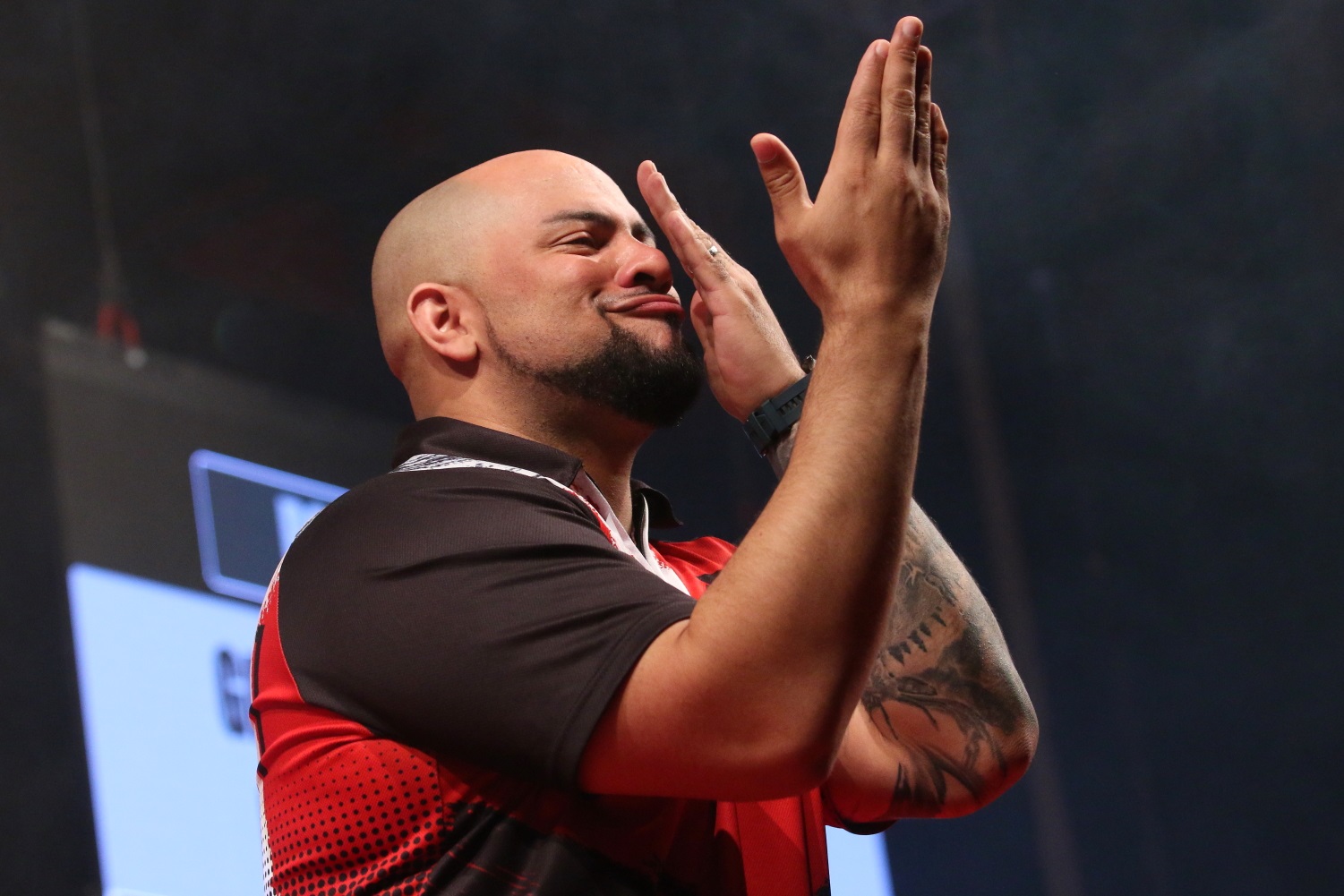 Gerwyn Price had won 17 matches in a row before today as he went in search of his 4th title in as many events.
That run could have been a lot shorter had Petersen claimed victory over the Iceman at the recent Autumn Series. However, the world number 3 produced a stunning comeback to take the title on that day.

Today, that final was avenged, as Devon recovered from 5-1 down to win 6-5 and send the Welshman home. Hitting eight 180’s in just 11 legs along the way.
The pair have produced thriller after thriller this year, and evidently, this was no different. The nature of the victory in the last two encounters will surely only seek to further increase the rivalry between the two stars.

“Gerwyn is a phenomenal player, we saw him win the World Series last week and he’s box office,” said Petersen, who averaged 103 and hit eight 180s in the contest.

“Today I thought it should be the day where we go face-to-face. Luckily for me we got to five-all, and I had that opportunity to finish him off.”

The South African star is in the form of his life, and has reached on Players Championship final and three semi-finals so far in 2020.

“It’s been hard work behind the scenes,” said Petersen, who has worked with Wayne Mardle and Colin Lloyd away from the spotlight recently.

“Lockdown means we’ve had more time practising, there’s loads of people who’ve influenced my game and this is the polished version – but I don’t even feel like I’m there yet.”

Van Gerwen and Wright through, as White and Lewis fall.

Michael van Gerwen returned to the European Tour with a bang, as he beat up and coming talent Steve Lennon 6-2. The Green machine was in a boisterous mood throughout the encounter and averaged well in excess of 100 for a large amount of the game.

That performance was immediately matched by the man currently vying to take the World Number 1 spot from van Gerwen. Peter Wright Produced a 106.8 in his victory over the Bully Boy, Michael Smith. His win sets up a Sunday Morning clash with Jonny Clayton, after the Ferret beat Chris Dobey to secure a Grand Prix spot.

Adrian Lewis’ poor run of first round defeats continued as he exited at the hands of Dutchman Danny Noppert. The former BDO world finalist controlled the game from start to finish and the win heaps pressure on Lewis to perform in Sindelfingen if he is to be at the European Championships.

Ian White is yet to hit the dazzling heights we’ve come to expect from Stoke’s number one. Diamond will be frustrated after losing to former world youth champion Max Hopp, especially after the crowds involvement. In both leg 9 and 10 as White attempted the leg winning double, members of the crowd ‘wolf whistled’ in an attempt to put White off. The attempts clearly worked as Diamond missed on all occasions and despite referee Russ Brays calls for order, they did not come.
Hopp however, showed his humility and maturity after the game in his interview. Speaking directly to the crowd he instructed them to give all the players on stage the respect they deserve.

Jonny Clayton’s previously mentioned victory over Geordie ace Chris Dobey ensured the Ferret will be in Coventry from next Sunday. The game was huge in terms of qualifying for both players, and both men delivered a high quality encounter. The Welshman ultimately coming out on top 6-4.
That took Dobey’s qualifying fate out of his own hands. He didn’t have to wait long though, as Michael van Gerwens win ensure Hollywood would also be at the Ricoh Arena.

Mervyn King won again, the only other man to defeat a seed on day two, to further secure his spot in Coventry. A solid 6-2 win means he continues his fine record of qualifying for the only double start event on the calendar.

The final spot in the rankings is currently occupied by Kim Huybrechts.
The Belgian isn’t competing at this weekends event, and will remain in the final spot unless home favourite Max Hopp wins come tomorrow night.

Wade through at the final hour as others move through comfortably.

After missing his flight to Germany, James Wade found his match re-scheduled to the final session this evening. His opponent, German Super league winner Nico Kurz.
Much has been written about the youngster in recent weeks, and rightly so. He has bags of potential and his comeback victory in round one proved he has the game to live at the professional level.
Despites all this, it was Wade the victor, 6-2, and sets up a clash with Mensur Suljovic in round 3. A typical 95 average and 32% on the doubles for the machine.

Elsewhere Kryzsztof Ratajski and Mesnur Suljovic impressed. Both men saw their opponents miss a dart to complete a perfect 9 dart leg, and still went on to win their encounters. Richard North and Jeff Smith the respective opponents.

Premier League quadruplet Daryl Gurney, Nathan Aspinall, Glen Durrant and Rob Cross all won in back to back matches. The final two being the more impressive in performance as the beat Scott Waites and Willie O’Connor.

And Finally. Dave Chisnall returned to the Euro tour with a 108.65 average, as he beat German Qualifier Lukas Wenig 6-0. Not a bad way to make your return, or open the days play.
Chizzy’s reward is a thrid round tie against Nathan Aspinall.