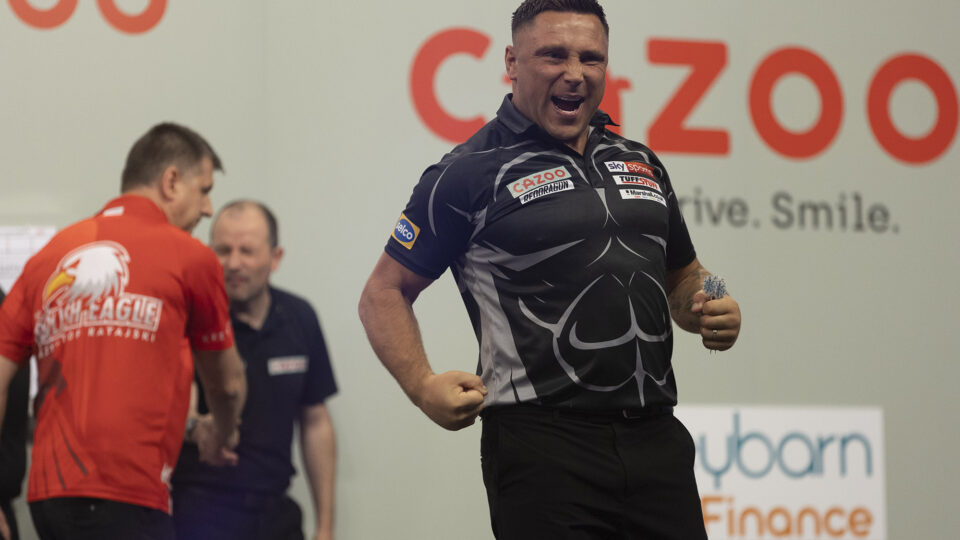 Gerwyn Price and James Wade both won their Quarter-Finals on night seven of the Grand Slam of Darts.

It’s no surprise to see Gerwyn Price and Jonny Clayton duel it out in a PDC televised event. It feels like the pair, since their World Cup victory last year have been on a collision course in every event since.
In the last few meetings, it has been the Ferret that has taken the spoils. But Wolverhampton is Price’s territory, and the Iceman is still in contention for his 3rd Grand Slam of Darts title, in just four years.
To summarise the game, Price got out in front many time. Clayton hit back many times. But every time he drew level, Price hit the accelerator over and over again. Keeping Clayton at arms length.

The World Number One took the game to Clayton in the early stages. Jumping out to a 4-1 lead. It was the second mini session that went in Claytons favour, but only marginally. Reducing the deficit to 6-4. The pair were level just 2 legs later as the reigning Grand Prix Champion fought his way in to the match.

The pattern continued throughout, as Clayton never managed to lead the match despite being level 4 times in the match. Price ultimately having too much for his compatriot, as he sets up a Sunday Semi-Final against James Wade.

Wade hunts back to back Finals

Coming in to this event, you could be forgiven for perhaps writing off James Wade’s chances of reaching yet another televised major final. The Machine has not been in great form for the last 6 weeks. A white wash at the hands of Mervyn King in the World Series Finals. Early exits at the final block of Super Series events. It looked like Wade had got his form all wrong heading in to the business end of the year.

Fast forward 6 days, and Wade looks imperious. A sensational performance against Rob Cross in the group stage has jumpstarted James Wade in to life.
And it was that man Cross that was on the receiving end once again this evening.

The duo traded holds of throw all the way up to the second mini-break. It was then the reigning UK Open Champion made his move. Five of the next Six legs went the way of the man from Aldershot as he maintained an excellent level of finishing throughout. The Highlight a 150 checkout. At 12-8 behind Rob Cross mounted his charge winning 4 of the next 5 legs.
But the door was shut firmly in his face just as he threatened to level. Wade firing in a 148 checkout to restore a 2 leg lead, that would ultimately allow him to see out the match.