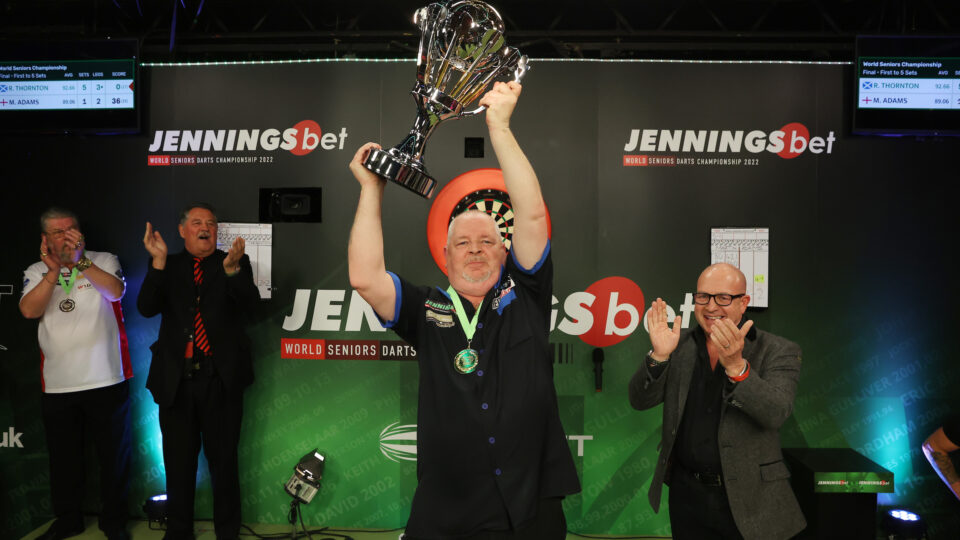 Robert Thornton defeats Martin Adams 5-1 in the final, following a victory over Painter earlier in the afternoon.

A fantastic weekend at the Circus Tavern was completed on Sunday, with three fantastic games.

Robert Thornton saved his best performance of the weekend for the final, in which he beat Martin Adams 5-1.

Robert Thornton continued the form we have seen all weekend, from the start in the final, with an 118 average in the first set to win 3-0.

Thornton continued his fine form into the second set winning it 3-0 and taking control early on.

Set three went the way of Robert again, but we saw Wolfie get his first leg in the final. The quality in the final was in full force with 9 180’s hit between the players in just 10 legs.

The relentless nature of Thornton continued in set four and moved just one away. With the Circus Tavern crowd hoping for more darts, Martin Adams duly obliged and punished missed match darts to get a set on the board.

Robert Thornton finally got over the line in the sixth set. He made us wait initially missing eight match darts, until he finally won the game on double two to be the first winner of World Seniors Darts Championship.

The Sunday afternoon session saw the two Semi Finals. First player to book his place in the final was Robert Thornton who defeated Kevin Painter 4-2. The Curse of Phil Taylor was in full effect, with Kevin Painter unable to follow up last nights win.

Going into the first break, we was all square with Thornton opening up proceedings before Painter levelled it up with a 78 checkout.

After the break it was Thornton who took came out stronger going 2-0 up, with Painter fighting back to 2-2, Thornton found a 15 darter to take the lead once more.

The fourth set also went the way of Thornton, but the standout moment must go to The Artist. With Thornton back on 212, with 170 left Painter fired in two treble 20’s, before stepping back and making the crowd wait until he fired in a perfect bull.

It was Thornton’s turn for a 170 but he wired the Bull, before Painter went on to win the set and leave him just one behind.

The final set Thornton lead from the start and won the set 3-1 and booked his place in the final.

The second Semi Final it was Wolfie who was victorious with a 4-2 over Terry Jenkins.

Similar to the first game, after two sets we were all square with Jenkins getting the opener before Adams levelled up in a deciding leg in the second.

The third set it was Jenkins who raced into a two leg lead before Adams, found three straight legs to take the set and the advantage. The Bull responded well and it was a 3-1 win the fourth.

Set five had a similar to feel with Terry taking a two leg lead before Wolfie fired in three of his own to take the lead once more.

That fifth set seemed to take the stuffing out of Jenkins