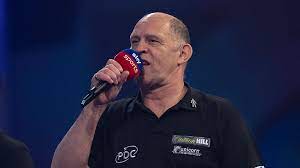 Russ Bray returns following Operation “Going and getting it done, it’s a new lease of life.”

Russ Bray had a break from the stage recently to have a much needed hip operation. The Voice who has been with the PDC since the 1990’s has been suffering with hip problems. He recently had a successfully operation which has seen him return to our screens on the big stage.

“Going and getting it done, it’s a new lease of life. That aching pain as gone now I’ve had the operation.”

“I feel amazing now. No tablets at all. No painkillers and it is a lot clearer on the stage.”

Russ had been struggling with this for a number of years and told us that he needed to take things for the pain.

“Before I was swaying, it was horrible. A couple of times I’ve said to the people behind to keep an eye on it for me, it’s a horrible feeling.“

“Asia Tour and Australia I go out 3 or 4 times a year. Asia tour I love it. There is going to be a Michael van Gerwen, a Phil Taylor, a Eric Bristow in Asia, “

Click here to listen to the full interview with Russ Bray.