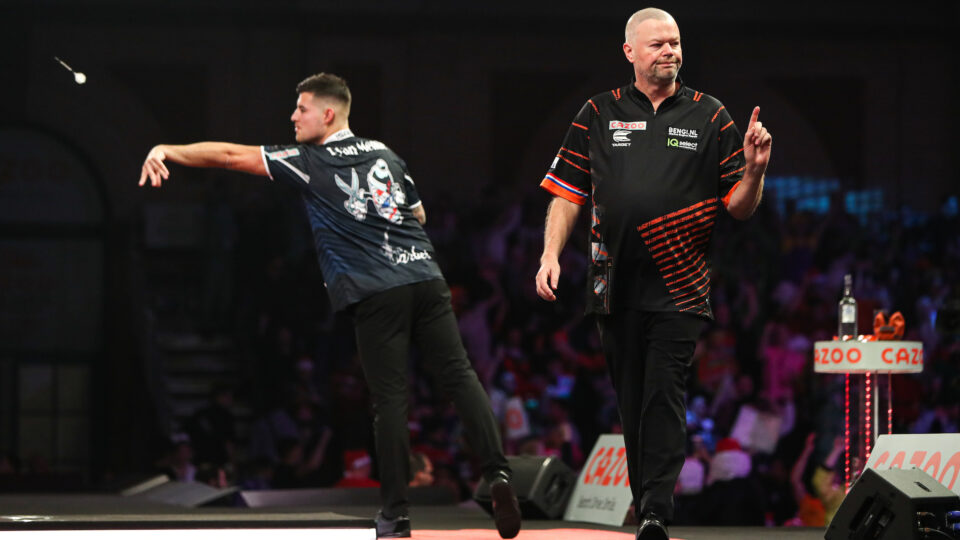 The five-time Champion of the World will now take on Gerwyn Price for the third time in 3 PDC TV events. The Dutchman won both previous meetings.

Queen of the Palace Fallon Sherrock was defeated on her return to the Alexandra Palace. Ricky Evans produced a comeback victory to end Sherrock’s hopes of repeating her memorable feat from two years ago.

The Barney story goes on

When Raymond van Barneveld was defeated by Darin Young on the Alexandra Palace stage in 2020 it bought an un-ceremonial end to a one of the most important careers in darts. Fast forward three years, and the former Postman from the Hague is about to take on the World Number 1, on the World Championship stage, with a chance of victory.

Van Barneveld defeated Price not once, but twice in the Grand Slam of Darts earlier this season. Victory over Ryan Meikle in round two gives the Dutchman a chance to repeat that feat once again.

Meikle has impressed in 2022 earning over £60k in ranking money this season and surviving a Lisa Ashton comeback in round one. He started brightly in this match too, averaging 100 for the opening set to put RvB on the back foot.

The Barber stayed at that level for set two, but it wasn’t enough to double his lead as Van Barneveld produced an average of 115 for set two, winning 3 straight legs.

The third set went tight, but in the decider Meikle produced too many visits without a treble to hand the lead to his opponent.

Barney then reeled off the 4th set in straight legs once again to set up that mouth-watering fixture with Gerwyn Price.

Sherrock defeated on return to the palace

Ricky Evans recovered from a set behind against Fallon Sherrock to defeat the Queen of the Palace.

Sherrock was returning to the PDC World Darts Championship for the second time since she made history by defeating Ted Evetts and Mensur Suljovic in 2020. Becoming the first female player to win a match at the PDC World Championship.

Evans entertained the crowd with a festive themed walk on, in a santa hat and beard, but it was Sherrock who had the crowd believing of Christmas magic once again. She took the opening set 3-1 and walked off the stage to a boisterous response from the Ally Pally faithful.

In his post match interview Ricky Evans claimed that Fallon had been the better player in this match. For large parts of the game that may well have been the truth. Sherrock continued to outscore Rapid, who noticeably was more measured in the key moments of the match. Whilst that hesitation appeared to not benefit the Englishman, Sherrock failed to capitalise in any of the 3 deciding legs that followed. Losing 3 straight sets to depart.

Williams and Hendriks Progress to round two

Williams took on 19-year old Polish star Sebastian Bialecki, and was pushed all the way to a deciding set by Bolt.

The youngster lead the match on two occasions winning the first and third set with a seemingly unflappable demeanour. But, Williams is an experienced pro, and both times immediately responded to keep himself in the match.

They key moment in the set came in the first leg, as Williams capitalised on 2 missed darts at double to secure the early break needed. The duo then traded holds for the rest of the set to seal the Welshman’s place in round two.

The Dutchman is a former World Youth Masters champion, but his professional career has somewhat struggled to live up to the expectation he carried as a teenager. His biggest win on tv notably defeating Martin Adams in the first round of the 2013 BDO World Championship.

Hughes also cut his teeth in the BDO before making the jump to the PDC, but lost the battle on the Alexandra Palace stage this evening. Both players visually struggling to produce the darts they are capable of.

The first two sets were split before the Dutchman sealed the victory with back to back sets.

Brendan Dolan now awaits in the next round.