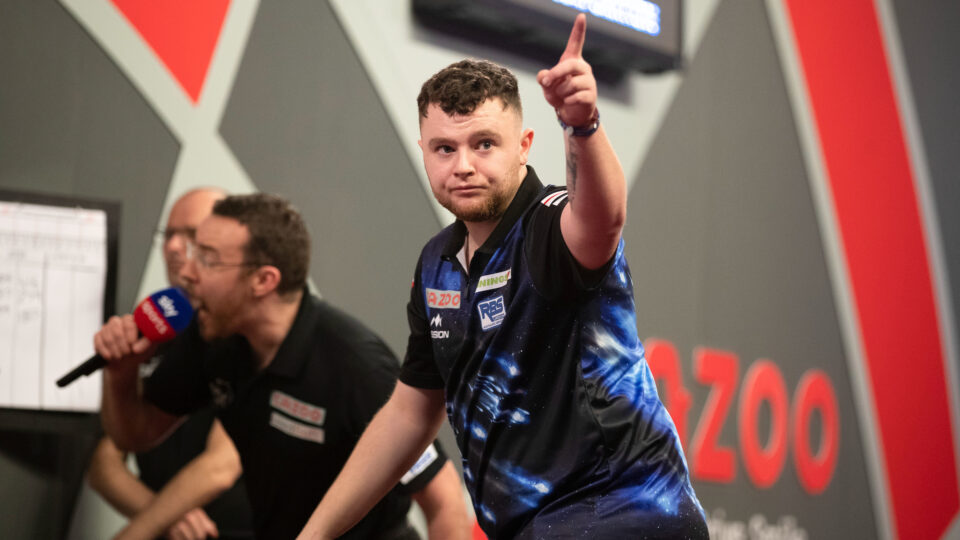 Superchin was defeated in straight sets by firefighter Alan Soutar. The Scot having already accounted for Mal Cuming in round one.

There were no such issues for Dimitri van den Bergh however, as he beat Lourence Ilagan to move in to round three.

Because of the world rankings, Alan Soutar defeating Daryl Gurney will go down as an upset.

Recent form however may have suggested this result was on the cards. The Scot has recently made an adjustment to his equipment, and it appears to be paying off. With his average, double percentage and 180 per leg stats all significantly better at the back end of 2022.

Gurney however has struggled for form this season, and doesn’t appear to be the same player that lifted 2 PDC major titles just a few years ago.

Soutar lead the match from start to finish, taking advantage of a slow starting Gurney in the first set.

All three sets went the distance, but it was the second set that did the most damage. Soutar twice taking out 110 to reach 2-2 before firing in a 14 dart leg to exit stage left with a two set lead.

Much like set two, Gurney put himself in a strong position to win the third, reaching 2 legs first. However, Soutar once again produced two legs on the spin (Both in 15 darts) to wrap up the match, producing a 160 checkout to get over the line.

Dimitri van den Bergh had the honour of closing out the later starting evening session.

Some of the fans present may be thanking the Belgian for winning in straight sets, allowing them to make their way back across London at a more reasonable time.

The former Matchplay winner has reached the quarter-finals here twice before, and started his campaign to go even better in style. The Dream Maker nailing a 164 checkout to wrap up a three set victory.

Josh Rock was quoted as short as 5th favourite pre tournament to lift the title. That’s despite the World Youth Champion being on debut here at the Alexandra Palace.

Rocky has relatively little tv experience despite hitting a 9-darter against Michael van Gerwen in Wolverhampton just a few weeks ago. But the nature of that performance only saw his stock rise.

The first two sets of the match could be described as frustrating for Rock, who exited the stage level at 1-1. Justicia’s first leg on the board in set one came by way of a 130 checkout, levelling the set with a hold of throw. The set however, went in the opposite direction.

Set two did go the way of The Joker (One of two players sharing that nickname in the event. The other being Rock’s compatriot John O’Shea). Sealing the 4th leg, and with it the set in 17 darts.

The Northern Irishman was just not producing the top level he, and now others expect of hi at that point, but after the break he emerged a new player, settling in to this rhythm, and winning back to back sets to knock out the Spaniard Jose Justicia. A player that represented a significant challenge when the draw was made.

Lisa Ashton suffered heartbreak once more on the Alexandra Palace stage. The Lancashire Rose fought back from two sets down to Ryan Meikle to force a deciding set only to fail to register a leg in the decider.

The Barber was beaten by Michael van Gerwen at the Players Championship finals in Minehead just a few weeks ago gave praise to MvG for the advising he be more confident after that match.

That was pretty evident throughout the clash with Ashton, as the 26 year old remained calm to halt the Ashton comeback and book his spot in the second round for the very first time.

World Cup winner Simon Whitlock survived a 5 set encounter of his own to move in to round two. The Australian, a former two time world finalist, was pushed all the way by Christian Perez in the second match of the day. But the Australian used all of his experience to claim victory in a deciding set.

It wasn’t the usual high scoring performance fans have been used to seeing from The Wizard. Whitlock was out scored in both the 140 and 180 columns. But as the old phrase goes, trebles for show, doubles for dough, and the Australian was the most clinical on the outer ring in the big moments.

The result sets up a clash with Jose De Sousa on Monday afternoon which could be littered with big scores if both players produce what they are capable of.

Adam Gawlas gave his mother the perfect birthday present, as he defeated Richie Burnett in round one.

The Czech ace won back to back sets from 2-1 behind to beat the 1998 BDO World Champion on his return to the Alexandra Palace after an 8 year absence.

The victory not only secured his passage in to round two, where Ryan Searle awaits, but provisionally moves him in to the top-64, and saves his tour card for another year.

Smash, Martin Lukeman booked his spot in round two with a comprehensive victory over Nobuhiro Yamamoto to open the days play.

Lukeman won the match in straight sets in what will go down as a professional if not un-spectacular performance that saw him attempt, and hit, three times as many doubles as his Japanese opponent.

The absence of a 180 next to Lukeman’s name may be a concern for him moving in to a match with Martin Schindler on Friday, but for now, it’s all about job done for the world number 41.

Last but not least

Cameron Menzies achieved the rare feat of playing in two world championships in the same calendar year tonight. The Scottish thrower participated in the WDF World Championships earlier this year thanks to the PDC giving him, and other new tour card holders dispensation due to Covid-19 earlier in the season.

Menzies reached the semi-final on that occasion, narrowly losing out to Thibault Tricole in a 9-set thriller. But Cammy put that heartbreak behind him this evening, as he defeated Brazilian Diogo Portela 3-1.
The Brazilian was playing in his 6th PDC World Championship as a South American representative, and will be disappointed to fall in the first round once again. His only victory on the World Championship stage coming against Steven Beaton in 2021.