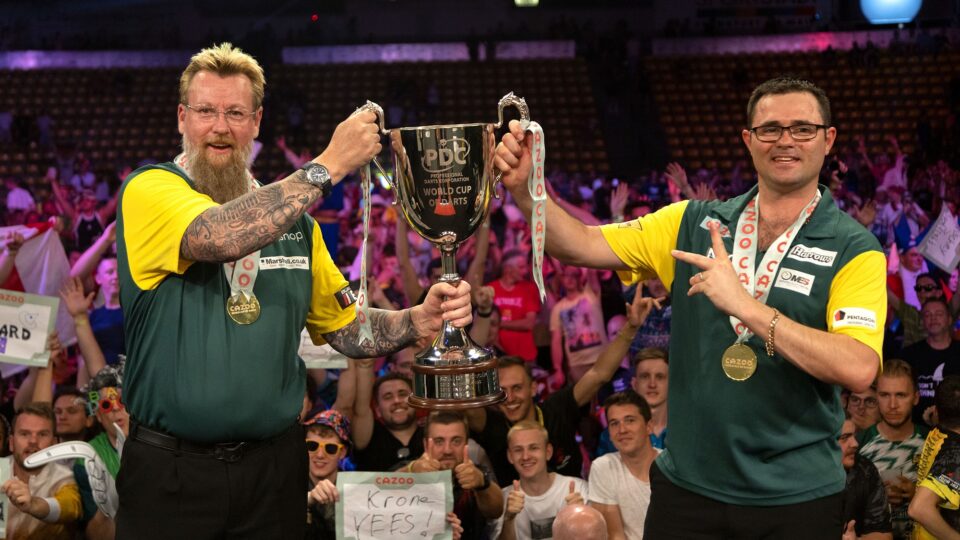 Australia win the World Cup of Darts after beating Wales 3-1 in an epic final.

The Aussies become the fifth country to win the tournament since its inception in 2010. Ten years after heartbreak in the final against England, Simon Whitlock takes home the gold medal.

Damon Heta got the pair off to a brilliant start by whitewashing Gerwyn Price in the opening match. The Welshman only averaged in the mid 80s in what was a stroll for Heta.

With the help of a clutch 120 finish, Whitlock snuck past Jonny Clayton to double their advantage going into the pairs game.

Coming from 3-2 down, the Welsh won the pairs game 4-3 after Simon Whitlock missed D18 to win the tournament.

The tie was eventually wrapped up by Damon Heta against Jonny Clayton in the fourth game, though. After missing three match darts, The Heat pinned D16 to hand the trophy to him and his partner.

It was a long day for the eventual winners, who started the day off against a bullish Belgian side. Van den Bergh beat Heta in the opening match, meaning Whitlock had to beat Huybrechts to stay alive. Despite a huge 170 out from the Hurricane to stun Whitlock, Simon kept his nerve and set it to pairs.

The pairs was a brilliant performance as the Australians coasted past the boys from Brussels into the semi-finals.

The semi-final was against England, who will be kicking themselves. Michael Smith was 2-0 up against Heta before busting 72 and then making a mess of the rest of the game. Heta cleaned up and Smith suffered a shock defeat. Then Whitlock whitewashed Wade in probably the easiest game the Aussie played at this tournament.

Australia’s Route to the Title

In 2012 Australia missed six match darts before watching England lift the trophy in front of them. Tonight, they beat seeds number 4, 2 and 1 to finally lift it themselves. The victory also comes just a few months after the passing of Australian ace Kyle Anderson. Whitlock and Heta have done him, and their nation very proud with their performance tonight. A victory well deserved.