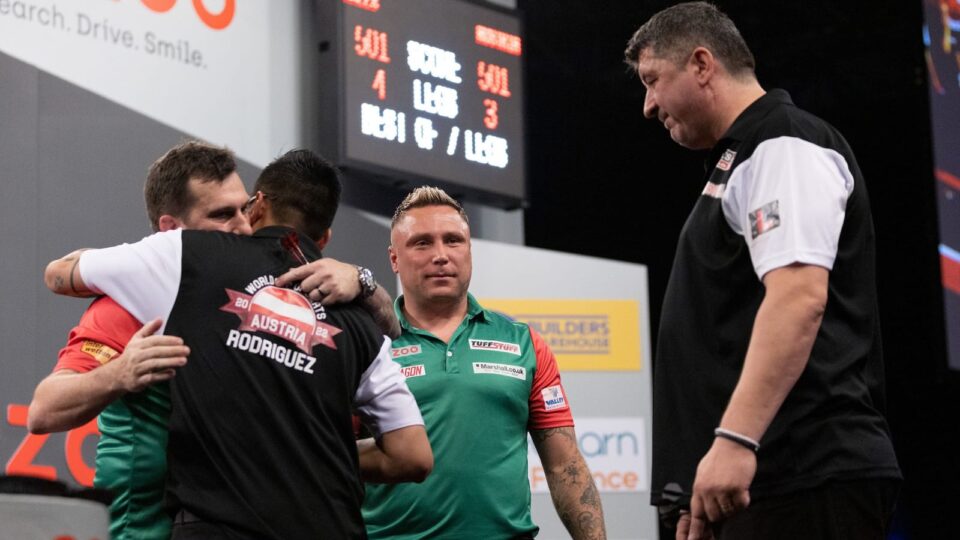 Favourites Wales were taken to a pairs deciding leg but eventually got past last year’s runners up Austria as all eight seeded countries advanced to Sunday’s quarter finals.

Wales advanced to Sunday’s quarter finals at the expense of Austria as Gerwyn Price become the first player in World Cup of Darts history to hit 3 100+ checkouts in a single match. Price started his singles match with Mensur Suljovic by taking out 156 in the opening leg. Suljovic held in the next leg before four successive breaks followed, the final leg of the sequence seeing Price take out 149 as Suljovic threw for the match. That took it to a decider where ‘The Iceman’ took out 142 to give Wales a 1-0 lead.

Rowby-John Rodriguez hit three maximums as he defeated Jonny Clayton 4-2 to take the tie into the deciding pairs rubber. A tense match went with the darts despite numerous break opportunities before Wales’ extra quality told and their clinched victory with their sixth match dart.

Danny Noppert and Dirk van Duijvenbode put on a maximum masterclass as Holland swept aside 2019 runners up Ireland. ‘Noppy’ hit five 180s as he eased past William O’Connor, averaging almost 100. Not to be outdone, ‘The Aubergenius’ hit four of his own whilst averaging over 110.

Elsewhere, England, Scotland and Australia also needed to win their pairs matches before booking their quarter final spots. Madars Razma beat James Wade to take their tie all the way before England won through 4-2. Jose De Sousa defeated Peter Wright to take their tie to the doubles rubber but Scotland claimed the win without dropping a leg. Daniel Larsson earned the notable scalp of Damon Heta but it wasn’t to be enough as Australia eventually won through 4-2 in the pairs.

Daryl Gurney and Brendan Dolan both hit ton plus checkouts as Northern Ireland beat New Zealand. Gurney took out 117 during his 4-2 victory over Ben Robb. Dolan then took out 107 as he beat Warren Parry by the same scoreline.

Germany sailed through to the quarter finals at the expense of Denmark. Gabriel Clemens and Martin Schindler claimed 4-1 victories over Andreas Toft Jorgensen and Vladimir Andersen respectively.