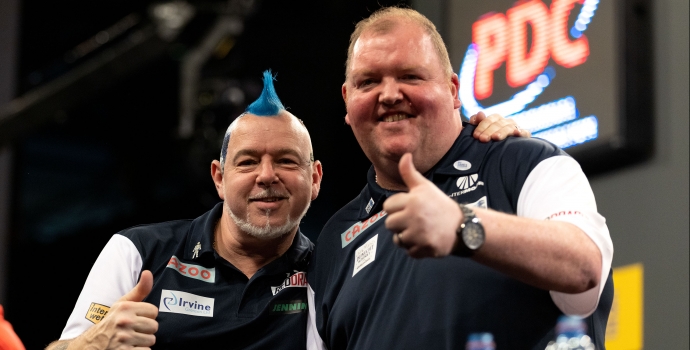 The second day of action went with the form book as the seeded countries progressed routinely.

Scotland eased into round two as they put paid to Hong Kong’s dreams of an upset with a routine 5-1 win. Breaking in the first leg of the match, ‘Hendo’ and ‘Snakebite’ were never forced to get out of second gear as they set up a tie with Portugal on Saturday evening.

England had one of the more difficult looking first round ties on paper but were impressive in easing to a 5-1 win over Czech Republic. The tone was set with an opening leg break and after the Czechs missed a break back opportunity in leg 4, England put together 15 and 14 dart legs to romp home against a very capable pair.

Solid Start For Aussies and Belgians

Australia sealed their place in Saturday’s second round with a notable performance against Lithuania, running out 5-2 winners. After the opening two legs went with throw, Simon Whitlock opened leg 3 with a maximum which was duly followed by team mate Damon Heta. ‘The Wizard’ then hit treble 20 and treble 15 before going just outside with his attempt at double 18. Heta returned to complete a 10 dart leg while Whitlock showed that the near miss at history was put to the back of his mind in the very next leg as he hit a glorious 117 checkout to lead 3-1. After a succession of holds, Australia then broke in leg 7 to seal their win.

Belgium got their campaign off to a solid start, setting up a tie with Poland after beating Japan 5-2. Too many trebleless visits for the Japanese pair meant they didn’t give themselves enough opportunities to put the Belgians under pressure. They did show some resolve to break for 4-2 as Belgium threw for the match but it was too little, too late and Belgium completed their victory in the next leg.

Poland squeezed their way through to the next round, beating USA in a dramatic last leg decider. Danny Baggish missed tops for a 160 checkout to win it before Krzysztof Ratajski closed it out on the same double with the very next dart, Sebastian Bialecki having hit a maximum with Poland’s previous visit.

An impressive display from Madars Razma helped Latvia to a comfortable 5-1 over Hungary.

Sweden earned their first World Cup victory in eight years as they saw off the challenge of South Africa. Having raced into a 3-0 lead, victory never looked in doubt, eventually winning through 5-2.